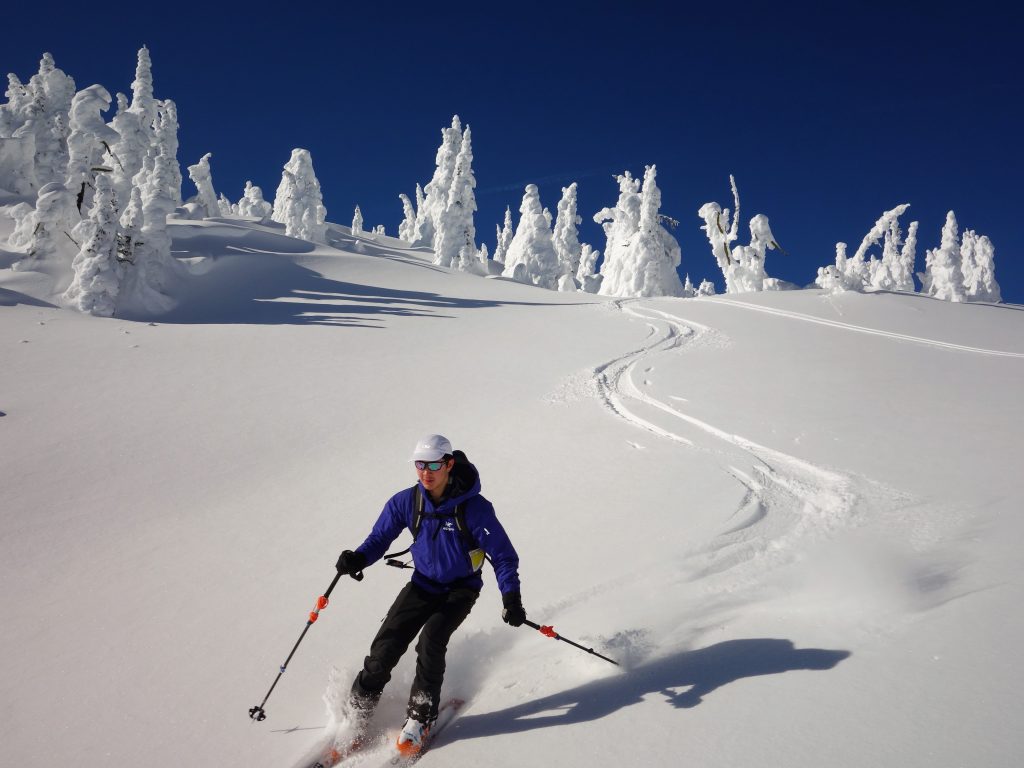 Out of the blue, Brant, I guy I had befriended at the climbing gym, invited me on a three day hut ski traverse in Canada. It was too good of an opportunity to turn down. Our plan was to do the Bonnington Traverse nearly Nelson, BC. The traverse is approximately 30 miles long and travels between nice cozy huts. Brant had very sought-after permits and was looking for some more partners. However, as the weekend approached, we realized that avalanche danger was too high to do this trip, so we settled on a backup three day plan of skiing the first day at Whitewater Ski Resort and then just doing a two day trip out and back to Grassy Hut, the first hut in the traverse.

After a mixed day at Whitewater, we got to Bombi Summit at sunrise and started skinning the snow covered roads under the power lines. There was a snow plow chugging along, apparently starting to try to clear the road. The snow seemed very crusty and everything looked springlike, pretty strange for mid February in Canada. Hopefully it would be different up at Grassy Hut.

We made quick work of the first six miles along snow covered roads, which was pretty unattractive honestly. As we began to head up the hillside, the conditions changed dramatically. The temperature dropped and the surface snow became powdery. By the time we reached the col, the trees were all sparkling with fresh snow and powder was abound. We had found winter!

We took a short run down to the hut to drop off our overnight stuff.

We spent the afternoon taking a bunch of mellow runs through the trees near Grassy Hut. The snow was light and fluffy with a good base, making for effortless turns. We found tons of little “pillows” or jumps in the gladed trees to bounce off of.

Brant was curious about one cliff he saw so on the next run, I dropped below it to scout it out. The landing seemed reasonable, although a little flat, so I reported what I saw. He hucked it!

Even as the afternoon cooled, it was still perfect conditions thanks to the cold Canadian air. Every run was silky smooth.

Back at the hut, we met another party of four who was staying the night. Technically, Brant and I did not have the reservation for that night; we had the reservation for the night before but had not gone because of avalanche danger. The other group was understanding and allowed us to squeeze in. We had a great time talking to them throughout the evening and they even shared some delicious stew! We split wood for them outside and had a great warm fire going all night long inside the cozy hut.

The next morning, Brant and I skinned to the summit of Grassy Mountain and tried some runs on the southern aspect of Grassy. They were very good and snow stability seemed to be improving.

For lunch, we returned to the hut and packed up. We were greeted by two concerned skiers, one of which was a search and rescue person. They were looking for the group of four we had spent the night with. Apparently they were supposed to send a message with their SPOT the night before, but the message had not gone through! The two checking in were relieved, but annoyed. Another reason not to use SPOTs!

We had a short skin back to the col and then a nice run back down to the snow covered road. One of the women we had just met at the hut did not think we could make it back to the car without putting skins back on because of the ups and downs of the road, so we took that as a challenge. After some exhausting poling and skate skiing, we indeed did make it through six miles of ups and downs while still in downhill mode! Just when we were ready to cruise the road back down to the car, we found that the snow plow had made nearly a mile of progress while we were away, completely ruining the road for skiing and all the area around it! We had to navigate awkward crusty terrain to the side, making for a tiring finish. When we got back to his car, we found it had been broken into. I lost a cheap tent and sleeping bad and Brant lost his passport! Luckily, he still had a passport card to get back into the US. Watch out for car break-ins at Bombi Summit! Not all Canadians are that nice!

This was my first ski hut trip, and I loved every minute of it. I really wish there were better and more frequent hut systems in Washington, but I guess sometimes I will just have to go north for that! Thanks for inviting me along, Brant!