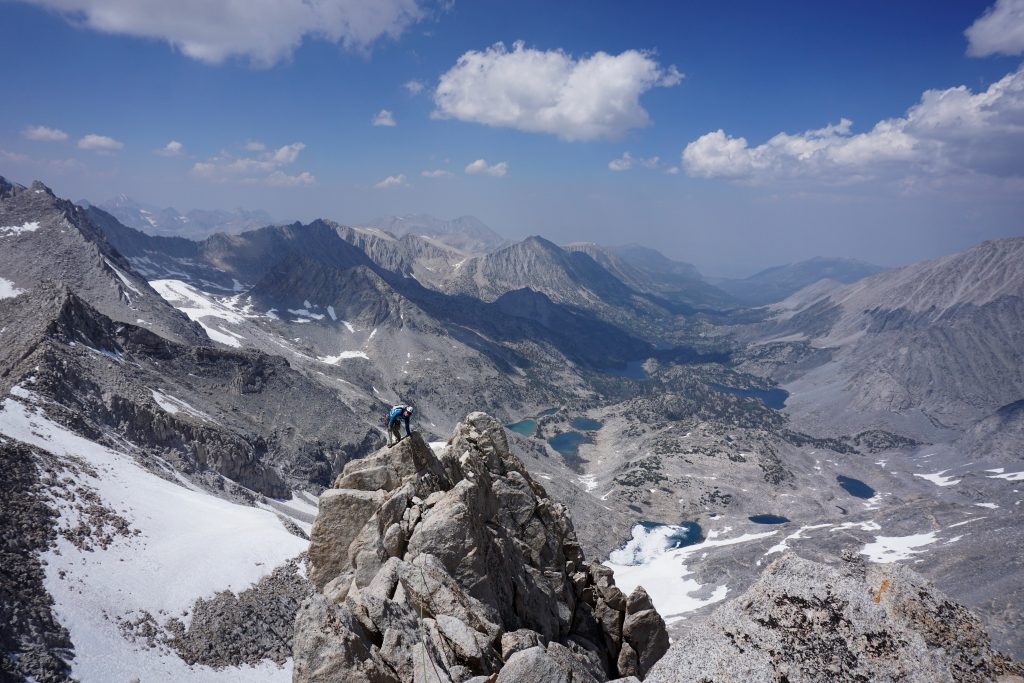 Welcome to the High Sierra

After climbing Fairview Dome the day before, we drove down to Mosquito Flats (enticing name, yes) and spent the night in the van before awakening around a little before 5 am for our first big alpine rock climb of the summer (Tuolmne just doesn’t quite count as alpine)! Very early on in the trail, we had striking views of the North Arete, our climbing objective, basking in the morning sun. Fortunately, the early morning was cold leading to minimal mosquitoes.

A few miles in, we turned off towards Dade Lake, where we passed a guided duo. Unfortunately they were turning back because of altitude sickness issues. Luckily, we were pretty well acclimated, but it is easy to forget that one is at 11,000 ft. nearly constantly in the High Sierra. Dade Lake was still mostly frozen and gave us a clean view of the North Arete.

We reached the base of the route around 9 am, 4 hours in. The first 5 pitches went quickly, climbing up steep Sierra flakes and jugs. The flakes were almost overwhelming, offering an abundance of handholds. Some seemed of questionable quality, but I never had one break off. The 5.8 crux chimney was easy to locate and went with little issue.

After the first 5 pitches, Kylie took over leading and we simulclimbed for a while. Sometimes we found more difficulties on the right side of the ridge, so we generally stayed left. After a while, I took the lead once again. The ridge kept leveling out and I was expecting to reach the summit anytime, but the route seemed to keep going and going. The views were also becoming better and better.

Eventually, I saw a fun looking 12 ft high fistcrack/boulder problem and just couldn’t resist. So I squirmed my way up, made a few airy traverse moves and suddenly found myself at the summit block! I had heard the summit block was an exposed, unprotectable 5.6+ boulder problem, and that was indeed the case! After Kylie joined me, I delicately made the final moves to the top.

Once at the summit, I found I was able to slip in a small nut and clip the rope through so that Kylie would be able to climb to the summit and back down protected. She took a moment to appreciate the 13,700+ ft summit.

All around, the views quite rugged and impressive, although a little smoky from the Mammoth-area fire. There was a huge boot-shaped lake below us to the west – Lake Italy – that we would later pass by on Sierra High Route. An equally tall massif to the north, Mt. Abbot, looked like a giant choss pile. I was glad on our choice of mountains to climb.

Since it was late afternoon by this point, we made one rappel off to the northwest and begin our descent. There was some moderately steep and slick snow to descend with just approach shoes and an ice axe, but we were able to make use of the 1-2 foot deep suncups to find flat footing and control our speed! I had never experienced suncups so massive you might lose sight of your partner before. Maybe the suncups are so big in the Sierra because it’s so dang sunny. #goodweatherproblems

Arriving back at Dade Lake, we filtered some more water and continued hiking out. We reached the car just as it was getting dark, making for a solid 15 hour day! First big alpine rock climb in the books!