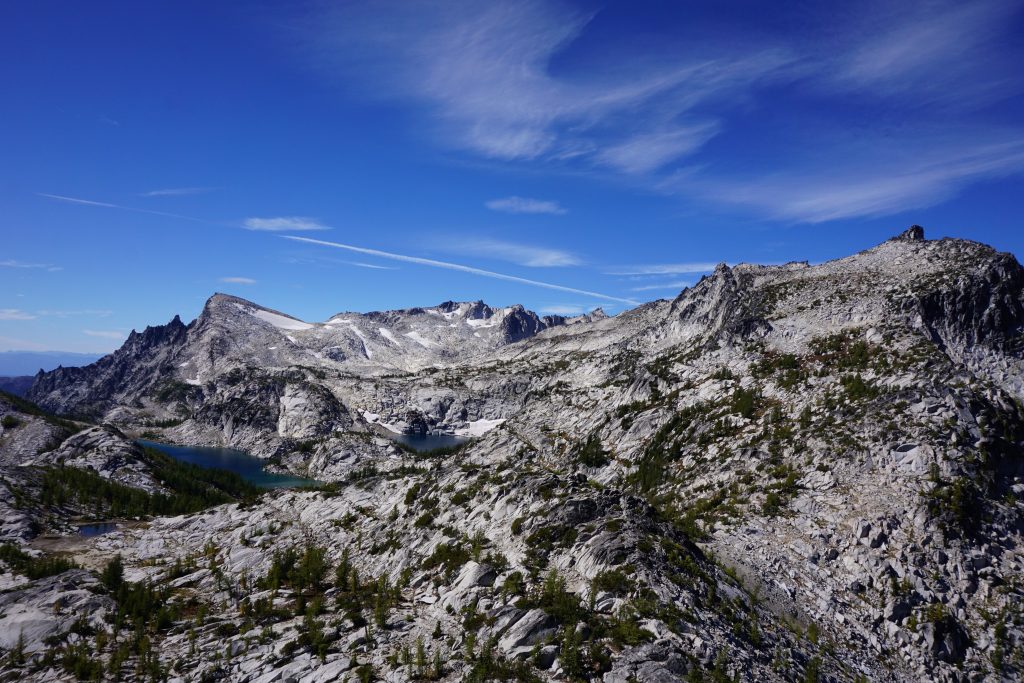 Two weeks after starting full time work, I got back together with Daniel and Logan for the first time in months for a long, chill day on the classic West Ridge of Prusik Peak. Prusik Peak is famous nationally because of its beautiful surrounding lakes and striking appearance. I had just been in the Enchantments two weeks ago with my family, but once again doubtful fall weather pushed us east.

We left the car a little before sunrise. None of us were feeling very wall, so we hiked pretty slow to Colchuck Lake. Aasgard Pass also went slowly, but at least it was a nice sunny morning when we reached the Core Zone.

We made it to the base of the route, but well behind our expected schedule. Amazingly, we found a line at the base of the route. There were at least four parties on route (one apparently a slower party of three) and another duo ahead of us in line! We considered turning back since we were already behind schedule, but we eventually decided to just wait it out and relax. It was a little cold and blustery, but not too bad in the sun.

We simul-climbed all on one rope the first few pitches up to the base of the crux slab. The climbing here was easy but the views awesome.

I took the “crux” slab pitch, which is an interesting 5.7. The moves are very secure, but there is no protection other than an old piton at the base of the 20 ft slab. It was super fun and led us up to a wildly exposed tip-toe ledge traverse with hundreds of feet of air beneath us. We began to understand why this route was so popular!

Even though we were a group of three, we still somehow kept bumping into the party in front of us, so we had to wait a little bit before the final pitches. We saw the looming off-width crack to the left, but decided to take the sick 5.8 finger crack to the right.

I led up the finger crack, which had great fingerlocks and adequate feet. After a few more flakes, I encountered the final squeeze chimney. Suspending my pack between my legs, I squirmed up the chimney easily and flopped onto the summit. What a great finish!

The summit was a party, with three or four groups waiting in line for the rappel. It began to occur to us that this trip might take longer than Glacier Peak in a day. But at least the summit was calm and nice. It is hard to find a more beautiful place with more perfect granite to climb.

The rappels and scramble back to Prusik Pass were straightforward. Then we set off back across the core zone in the evening. Storm clouds were moving in, but it seemed the weather would hold. It was chilly and the upper Enchantment Basin was deserted. It was a rare Enchantment experience to have so much solitude and it really magnified the beauty of the area. We smiled, for it was a good day, no matter how much the hike out in the dark would suck.

We raced down Aasgard Pass in the waning light, literally jumping and sprinting across boulders to reach the trail right as darkness settled in and we had to bring out the headlamps. Lookin up, we saw some headlamps wandering through the cliffs thousands of feet above Colchuck Lake beneath Colchuck Balanced Rock. Hopefully the night was gentle on them.

We went into zombie mode on the hike out, reaching the car a little after 10 pm, about 16 hours after leaving the car (same time as Glacier Peak!). With the long drive home, I crawled into bed almost 23 hours after waking up, ready for work the next morning. This new chapter of life as a weekend warrior was off to a great start!