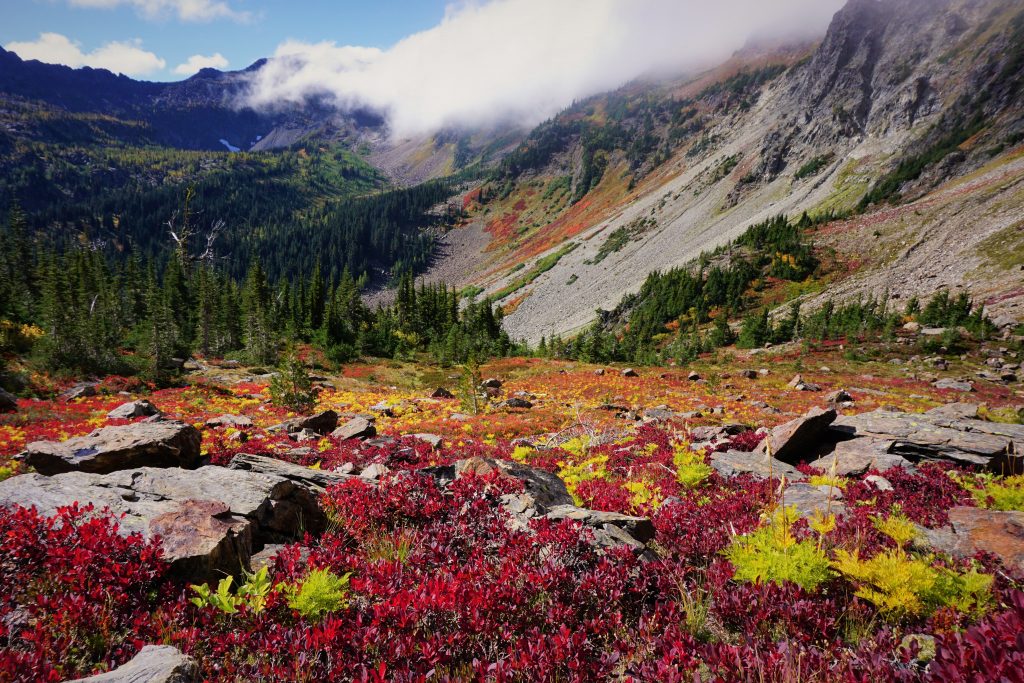 Off the Beaten Path

Often overlooked by their Enchanting neighbors, the Chiwaukum range has always enticed me ever since my first big trip to Big Jim over four years ago. So with no big plans and a marginal weather forecast, I set off for an “exploratory” trip in the Chiwaukum. I wanted to climb Big Chiwaukum, the highest peak of the range, from White Pine Trailhead but create a loop for a nice tour. To make this possible, I had to travel over a lot of questionable terrain.

I had only heard of the direct route up to North Chiwaukum in the winter, but I can verify it works when in not snow cover too, as long as you have a tolerance for thousands of feet of steep (and in my case, terribly wet and slippery) brush. All the downed leaves and branches were slick from a storm the night before and I sometimes had trouble gripping. Poles were helpful. The first bit was the worse. There was a brief moment when I began to reconsider my decision in a thicket of Devil’s club and downed trees. I then realized I had to embrace the futility of all my actions to find peace with my struggles. The zen of bushwhack.

Around 4200 ft the ridge got less steep and a faint climber’s trail appeared at times. It kept getting better and eventually, close to 6000 ft, I got my first views of the valley nearby.

At this point, I was thoroughly soaked and a cold wind was blowing over the ridge. Pretty soon the trees were covered in rime ice. It was cold. The cold had advanced the stages of the larches to a nice yellow behind the icy covering.

When I got to the ridge at 7000 ft, it was full on gnar. No trees for protection, just barren icy tundra. I tagged the summit of North Chiwaukum 3 hours in. The (imaginary) views were exceptional.

As I contoured toward the saddle to the SE, I dropped beneath the clouds briefly and was treated to a beautiful little basin with sparkling ice covered larches! There indeed was hope.

Stepping over that saddle in the raging wind, I was treated to an incredible spectacle: raging clouds spilling over the Chiwaukum Crest, Larch Lake surrounded by yearning larches who in short time will earn the status of golden, and carpets of red, yellow, and orange sprawling across a deep valley. It made me want to cry. All was good.

I descended through a short scrambly section and then started to weave my way down the path of the least resistance. This quickly became the path of greater resistance, as I got sucked into some nasty alder and had to burrow through a creekbed for a good 15 minutes to get out. When I finally reached the bottom of the valley, and looked back, I saw that there was an easier path climber’s right. I went down more with the streams in the middle.

Finally on a trail, I had a nice stroll to Larch Lake and was even able to jog a little. The larches were just getting going and in another week they’ll be in their prime. I filtered some water and appreciated the lake. It was Enchanment like! Great granite walls and larches studded all the way up the mountainsides.

I then proceeded a few hundred feet up to Cup Lake. Here, I met one family, the only party I would see all day expect for close to the White Pine TH. We were once again socked in the clouds and it even hailed a little. I explained to them my plan and that I at least had to get over the crest somehow to get back. I think they took pity on seeing a skinny boy with such a tiny little vest pack in such poor conditions.

I had counted on “Partly Sunny” by the afternoon as NWS promised, but it seemed things were going the other direction. I was doing fine on time, just over 5 hours in, but with the poor visibility and a dying GPS, I wasn’t sure about continuing to Big Chiwaukum. I knew that once I entered the clouds I wouldn’t be able to see more than a hundred feet and there was a lot of tedious terrain in front of me, so I made the decision to pass on it and instead go back over Deadhorse Pass. I didn’t know anything about the route over Deadhorse Pass, but if a horse made it up (and then died) as the name suggested, it couldn’t be that bad right? Still, the pass looked suspiciously steep on a map and I got glimpses of cliffs through the clouds. I got a compass bearing and started up towards the pass in minimal visibility, but cliffs kept pushing me right. I was getting a little concerned, but then out of the darkness on the left emerged a cut through the cliffs: a passageway! This gully looked loose, but would hopefully go.

It was pretty easy down low, but got pretty loose and insecure up top. The fresh rain had really stirred the soil up. Still, it wasn’t as bad as the Mountaineer’s Route on Whitney (sorry, California, your “classic” route might be the worst scramble I’ve ever done) after two weeks of continuous afternoon thunderstorms. I topped out and was greeted with a blast of cold wind. If coming from the other side, there were a few other similar looking gullies, not sure which one is the right one but they all look kinda spooky from the top. I headed down from the pass pretty quickly. It was pretty eerie.

It got super still as I walked through this spooky basin. Watch out for the shadow-creatures appearing out of the mist. Or the wet bushes trying to soak you. Let’s be honest, hypothermia is the real threat in the Cascades.

After this flat basin, I was greeted with a bunch of steep cliffs and unattractive gullies. I inspected four or five of them like an unimpressed suitor before settling on the one that seemed “least ugly”.

It was class 2, but weird loose, slippery class 2 that had me maybe more uncomfortable than I was when I free soloed the West Ridge of Stuart. I don’t know, maybe I’m just getting old. Finally being of legal drinking age will do that I guess.

From here, the fun wasn’t over. As I got lower, the brush got thicker and thicker once again. And this time, I really got soaked. Not like, mama I peed my pants damp. Like, Mommy I fell in the toilet wet. My pants actually clung to my skin, they were completely soaked. I was getting pretty tired of this brush, but I guess it was my own doing. One thing about solo trips is you have no one else really to blame for your follies. It’s nice to be self-reliant but it’s also nice to have a scapegoat (and partner for support and safety, of course). I generally trended skier’s right and felt like it sorta worked. After about an hour, I finally found a climber’s trail. My speed greatly increased and then at about 4900 ft, I hit the Wildhorse trail, elated to out of the brush. From here, I was able to cruise down the trail back to the car, for a round trip time of just under 9 hours.

Total, it was about 15 miles and 7k gain with nearly all the gain off trail. In good weather, the views would be great. I think it’s a cool route because of the lack of established climber trails or cairns, but it’s not for everyone. I’d love to see someone complete it or even throw in some other Chiwaukum peaks. The falls colors are second to none. The Chiwaukum are massive, lonely peaks. They hold a very special place in my heart.