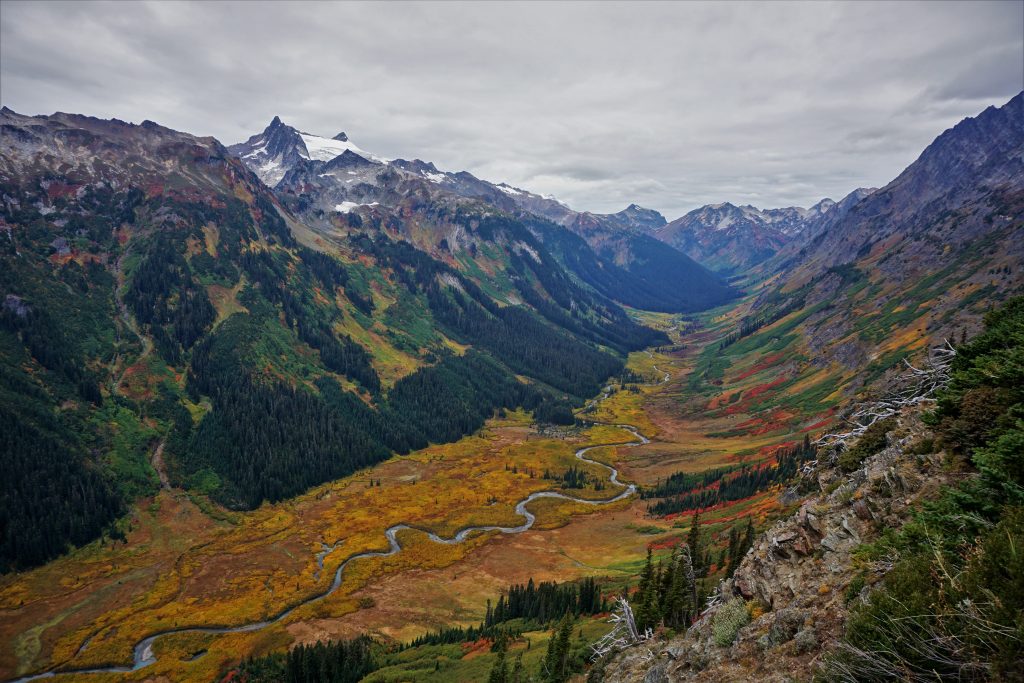 September was a transitionary month. Kylie and I were simultaneously moving in while starting full-time work, leaving little time to relax or get out. Since I never really gave my knee sprain a chance to heal, I took nearly the whole month off from running, logging a total of 14 miles or so (including the running I did in the Chiwaukum the weekend before). I was originally planning on doing the Alpine Lakes High Route, but after seeing some photos from Jason Hummel mid week backpacking this loop, I decided Friday night to change plans on go for this loop that had been on my radar for years. I had heard much about the Napeequa river valley: its Alaska-esque scenery, rugged unmaintained trails. Weather was once again looking iffy, but that’s part of fall in the Cascades.

On the drive in, it got cloudier and cloudier, making me doubt my choice of going north. Motivation is always less when going solo, and I wasn’t really felling it when I pulled into the Little Giant trailhead a little before 7 am. I started in the morning low light crossing the Chiwawa River. There was no obvious log crossing, but the river was nice and low. The trail was pretty easy to follow and not too bad for an unmaintained trail, but definitely steep. As I neared the pass, the fall colors really started to come on.

Soon I found myself in jaw-dropping fields of color. The red carpet unfolded in front of me. I’ve always thought of larches as the fall attraction, but these fields of red, orange, and yellow were even more stunning! I hung out in these soft meadows beneath the pass, enjoying the calm cloudy fall morning. I realized that even if I turned around here, it was already all worth it.

As I crested Little Giant Pass, I laid my eyes for the first time on the mythical Napeequa river valley. It was wonderful. Clark mountain, with its spilling glaciers, and a misty Glacier Peak overlooked the from the heights of the valley. Steep green hillsides gave way to an explosion of yellow at the tree-less valley floor (a Cascade rarity). The silty turquoise hue of the Napeequa wandered through the flatlands like it really didn’t need to leave this idyllic valley.

Despite horror stories of the trail down from Little Giant Pass to the Napeequa (supposedly a horse has fallen to its death here), I did not find the trail too bad compared to any other climber’s trails. There were a few no-fall zones but mostly I was able to jog and hop my way down. Once I reached the bottom, I began jogging and walking up the valley. I felt like I had been transported to somewhere totally wild like the Yukon or Alaska. I half-expected moose and caribou to come out around the corner.

The trail was overgrown, as expected, but still pretty easy to follow. Sometimes I would drop my head and scurry through a “brush tunnel”. The sights along the way were magnificent.

After four or five miles, I reached the point to branch off to the North Fork Napeequa to get to High Pass. I crossed the river and saw horse prints leading up into the brush and figured that if horses went up this way, this must be the way. Pretty quickly I found myself crawling through nearly impenetrable slide alder. It kept getting worse and worse and after about 15 minutes of this suffering I was considering turning back and finding the true “trail”. But I got a sense and started schwacking left and shortly thereafter picked up a game trail which led me to the main trail! This was much better and I quickly reached a flatter spot that marked the start of the “hanging valley”. A hanging valley is when a second glacier comes by and carves out the main valley much deeper than these side valleys, leading to a steep climb to get up to the secondary valley from the first, but relatively benign terrain once that is accomplished.

The trail was nondescript heading up this valley, so I jumped back and forth across the river, reveling in the fall colors and beautiful terrain around me. It was truly a Cascade wonderland. Over the summer, I saw such incredible landscapes across the west and such diverse mountains, but nothing could match the austere beauty and wildness of this moment. I felt a joy deep within me, a sense of ease and immersion in the moment. I felt like I could just sit down in one of the red meadows and cry forever.

As the terrain became less vegitated, I passed two other guys taking a break. I chatted with them and then continued on my march towards High Pass. High Pass was barren, windy and cold, but I found a rock to hide behind and eat my lunch. High Pass had been much more inviting last summer when I stopped by as a part of the Spider Gap – Buck Creek loop with my family. The uphill was over for the day. Somehow my weak out-of-shape legs did not feel too tired after 8,000 ft of gain. Still, there was at least 15 miles left – more if I didn’t hitchhike.

Descending from High Pass left me in familiar terrain. The trail section between High Pass and Buck Creek Pass is, in my opinion, one of the most beautiful stretches of (good) trail in all of Washington.

The clouds had dropped slightly lower, decapitating the tops of the giants around me, but the weather seemed to be holding out in general.

At Buck Creek Pass, I took a short break to drink some of the pure spring water (it was only a trickle at this time of year, but still there) and use the facilities. The meadow was quite calming. I soaked it all in for a moment before preparing for the painful slog out.

At this point, my running muscles were feeling pretty tired. I felt like I could keep hiking uphill all day, but trying to stride out and use my hamstrings was exhausting. This was unsurprising considering how little I had run in the last month. So I settled into a slow trot downhill and focused on the scenery around me. Around the burn area, you can look up at the massive north face of Buck Mountain (I think the ice line Buckshot is on this face).

A few hours after leaving Buck Creek Pass, I reached the trailhead and found it quite deserted. So I continued running along the road. A few cars passed by with empty backseats except for a dog, so I asked for a hitch, but they declined. At this point I didn’t really care so just kept on running. A mile or so from the car my left foot really started hurting (stress frature?!) and it got really bad after I finished and sat around in the car. So much for running; I guess I need another few weeks off.

This trip had been a long time coming for me, and yet it still surpassed my expectations. I think it tied Glacier Peak in a day as my favorite day trip ever. The Napeequa is now my favorite river valley. The Glacier Peak Wilderness continues to amaze me with every lofty peak, hanging valley, and colorful meadow. It’s not the most remote, rugged, or developed area, but it has a unique blend of all three that provide the opportunity to stroll through fields of flowers at the base of mighty glaciers in a true wilderness setting. I cannot wait to get back out there next summer.