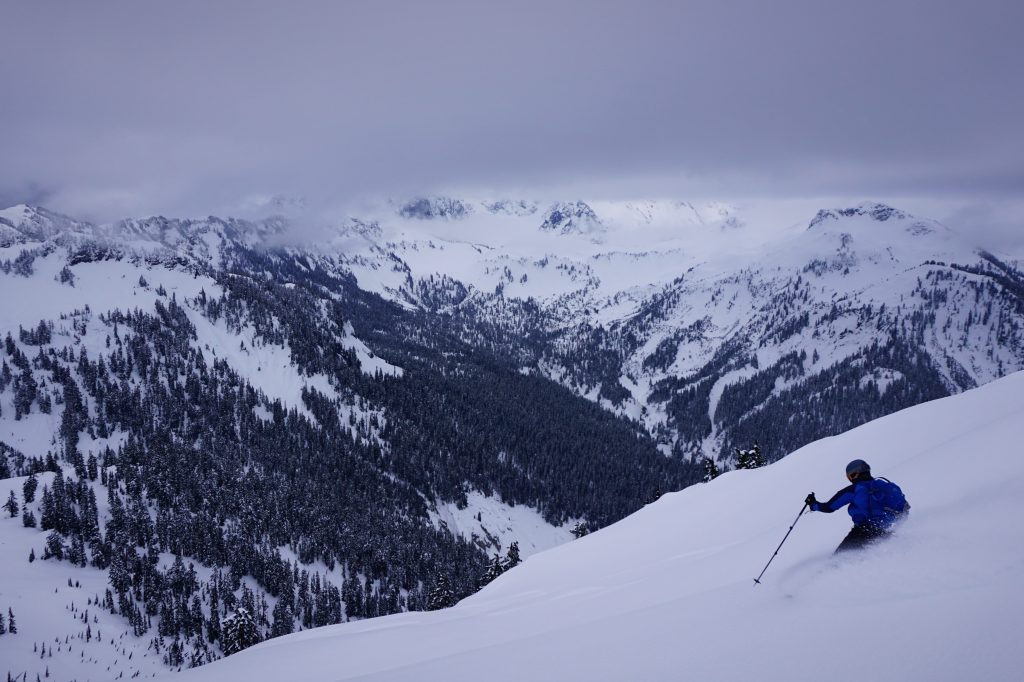 On Day 3 of our visit to Mount Baker for the weekend, we decided to ski out to Ptarmigan Ridge. We figured that the avalanche danger was safe enough to easily traverse from the south of table mountain. It also seemed like this area would have significantly less tracks than other areas of the Baker backcountry.

After pulling into the ideal parking spot and setting out, the cloud level seemed to still be around the summit of Table peak. This made us want to hold back on our early start to ensure that we would have good visibility for Ptarmigan. Instead, we decided to take a lap off the north face of Table Mountain.

The skin up was pretty peachy easy. We hugged the ski area boundary on climbers left and followed the obvious skin track to the summit. We saw a guy throwing up next to his buddies; it seemed like had maybe partied too hard the night before to be skinning at 8am.

We decided to drop in where there was no obvious cornice, but then traverse underneath it. These lines had not been skied out yet. It was a very fun, steep, fast run.

After joining back with the Artist Point skin track, we kept climbers right to move around table peak. We needed to traverse across the south face to reach Ptarmagin. When asked if we should rip our skins and drop in, I said that seemed like the easiest option. Kyle thought it would be faster if we just skinned across the face.

We decided to try to traverse the face since the quality of skiing seemed poor. The south face was actually full of frozen avalanche debris. I think we were both right: it would be easier to ski this part of the tour, and it was faster to skin across the slope. Pick your poison.

When we got to the ridge, there were only a couple of tracks skiing down into the west bowl. We ripped and picked our way around sun effected areas. It was a very nice run!

When we hit the bottom we noticed the beautiful 20 degree unskied northeast slope. It was clear that we had to take at least two hot laps on that face to ski. The snow was light, and we shredded hard.

After two laps, we decided to keep skinning up to gain the ridge line of Ptarmagin. There was a skin track leading through a cornice break, and Kyle expertly laid a skin track to that point. Two guys at the bottom saw us heading up, and I think they followed us because the skin track was so beautiful.

When we gained the ridge, the visibility was ok. This made it a little bit challenging to gauge features. Kyle pulled out the GPS to make sure that were dropping in where we had planned from the bottom. We knew that if we skied to the left of the ski tracks on the north face, then we would hit the slopes we wanted.

The run started with some beautiful low angle roll overs. We had to regroup frequently through this section to scope out the best descent path.

The slope then steeped to about 35 degrees for 500 feet. Kyle took the line aggressively with his fat powder skis, and kept my speed in check. It was an awesome section.

At this point, we decided to put the camera away because visibility was dropping and we were not covering new terrain. We traversed back across the south face of Table, and decided to ski off of the north face of Table.

For this run, we saw that under the largest cornice there were no ski tracks, so we traversed across the run once we had dropped in. However, I did not realize how steep and narrow this section of the mountain was between trees. I ended up skiing a 10 ft coulair with trees down the middle at 45 degrees. With my tired legs, I took it slow and steady to finish the run, but it was not very elegant.

Kyle took a slightly different line, and I watched him kill it from the bottom. A random snowboarder complimented him at the bottom. He is becoming such a good skier!

From the bottom of Bagley Lakes basin, we casually made it back to the car. We finished a two pound bag of baby carrots on our drive back! You could say it was a good weekend, but that would be an understatement.