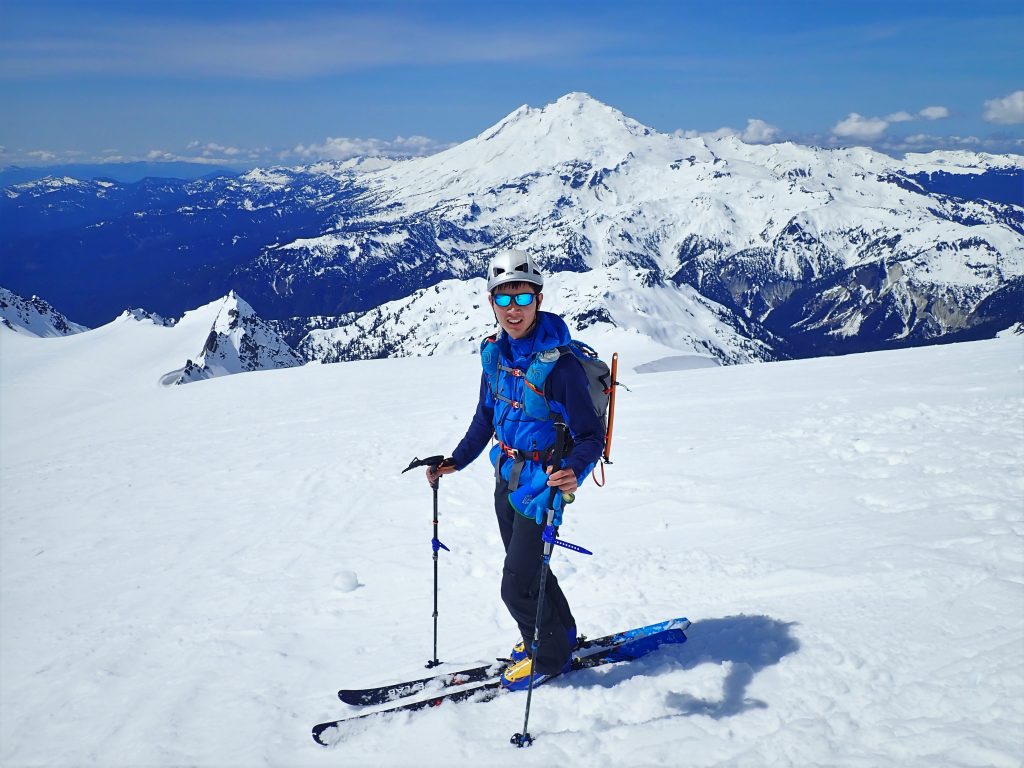 Primo Skimo in the North Cascades!

It is prime ski mountaineering season in the Cascades. Most trailheads are accessible, but snow coverage is good and most glaciers and couloirs are still good to ski. With the great weather, I really wanted to get out and test out some new ski mountaineering skis, but I struggled to find a Sunday partner so I settled on a solo ski of the Sulphide Glacier on Mt. Shuksan, a relatively chill route on an iconic Cascade peak that surprisingly, I had still yet to climb.

I left the car around 6 am hiking up the trail. Snow coverage really started to increase about 2 miles in at 3500 ft so I decided to put on boots and skins here, but I knew that skinning would still be dubious.

The snow started to disappear as I got higher so I had to boot through some brush for a little. But when I reached the ridgeline at 4000 ft, the snow coverage once again drastically improved and I could skin pretty easily through the forest.

I made great time up to the ridge to 4600 ft. Here, I entered the clear and had an amazing view of Baker just across the valley.

The climb up to the notch that would lead me to the base of the Sulphide was steep and shaded so I donned ski crampons. You probably could have survived without them, but I have learned in the past it is better to be safe than sorry!

At the notch, I contoured leftward towards the base of the Sulphide Glacier. It is difficult to tell this time of year where the glacier ends or begins and the slope is so low angle it does not make much difference.

Around this point, I caught up with a nice group of four (I remember the names Matt and Alex). Two of them actually had the same skis as me (Solomon XAlp Carbon)! They had all run ultramarathons the week before, so this was their “chill” outing. It is fun to see so many runners-turned-skiers like me out in the Cascades!

My friends Logan and Daniel had warned me that the Sulphide Glacier goes on forever. After cresting the first few bumps, I finally got a glimpse of the summit pyramid. Indeed, it looked miles away! And steep! At least I would be returning downhill on skis and not on foot like they did years ago…

At the next little bump, I caught up with another group. They had overnighted and were making their way towards the summit. They took this photo of me.

In a weird way, I was really enjoying this marathon skin across the Sulphide towards the summit pyramid. In such easy terrain, I could focus on my stride and pace. Life became simple, almost meditative. Visual progress was clearly evident. I realized I was way ahead of where I expected to be. And every time I looked back, the North Cascades grew even deeper and vaster.

At the top of Hell’s Highway, I met another party of three that was coming up the White Salmon Glacier. I got some great pictures of them skinning the last bit from there up to the base of the summit pyramid. At this point, the whole vista opened up, with Baker, Glacier Peak, and so many other might peaks in view to the south.

I probably pushed too hard earlier (obviously underestimating the length of the Sulphide Glacier) and was starting to feel pretty tired when I reached the base of the summit pyramid. The snow seemed pretty firm, so I decided to leave skis here, put on some crampons and boot up.

Most of the gully heading up the pyramid was probably 45-50 degrees, but there were already steps kicked in and my axe felt very secure. With Shuksan’s prominence, it felt like I was climbing up into the sky, the ceiling of the North Cascades.

At the top, there was a little gully to the left to exit onto the ridge. A tiny bit of rock and ice was starting to be exposed, so it could be an issue in coming weeks, but was fine for me. Another few steeps steps and I found myself on the true summit! I checked my GPS: 11:00 am! My ascent time of 5 hours was at least an hour faster than I thought possible for me!

Honestly, it has been a while since I have been atop a high North Cascade peak, but at this moment, it hit me once again how lucky we are to live in a place with such wild, beautiful mountains. It is like falling in love over and over again. When something is so powerful in your imagination and so dear to your heart, there are feelings that may ebb and flow, but never truly leave you. The North Cascades give me both a feeling of home and of mystery. Like there is always more to them, a different dimension, a hidden gem. Like another adventure is always waiting.

After about half an hour on the summit, I decided to head down, passing the original group of four as they ascended the summit pyramid.

Back at my skis, I talked to an older man. He had climbed Baker thirteen times and last climbed Shuksan before I was born! I hope I will be able to keep going at his age and keep experiencing these special places. Hopefully it will be a with a family and someone special.

It took me a few turns to get used to the short, light skis, but pretty soon I was hooping and hollering. The sun had softened the snow just enough, making for effortless turns at speed across the huge expanse of the Sulphide Glacier. All around me were beautiful snow-covered peaks. It was pure bliss, probably the most beautiful run of my short ski career.

There were quite of a few lengthy flat sections where I had to push for a while, but it went by quickly. The lower part of the glacier was starting to get wet and the snow would randomly grab my skis, but it was still a lot of fun. I cruised easily back to the notch, from the notch down to the ridge, and down into the trees. I took the run all the way down to 4000 ft before I had to take skis off, making for a 4 mile long, 4600 ft drop ski run! (Of course, there was a lot of pushing and side stepping involved).

After a little bushwhacking, I put my skis back on and tried following my up-track through the snow to get back to my running shoes. Of course, I took a few wrong turns and ended up having to traverse through slide alder. After all, slide alder is a required part of Cascade ski mountaineering experiences.

I changed back into my running shoes and finished up the hike, reaching the car at 2 pm, making for a round trip time of exactly 8 hours, quite a bit faster than I expected! It was inspiring to see the progress I have made as a ski mountaineer and how it has completely changed the way I move and experience the mountains. Backcountry skiing is truly one of my favorite activities now and it is more than just a means to an end. It is a way of life.

Some days, the mountains fight back and beat you down, but there are also days like these where everything comes together. Personally, it was reassuring to see that I can return to the mountains by myself and be completely comfortable within myself and in my own head. Everything I need to be happy at a base level in life is within me and these wild places. Sometimes we forget the simple pleasures in life: moving one foot in front of the other, feeling the sun on our backs, losing ourselves in beautiful places.