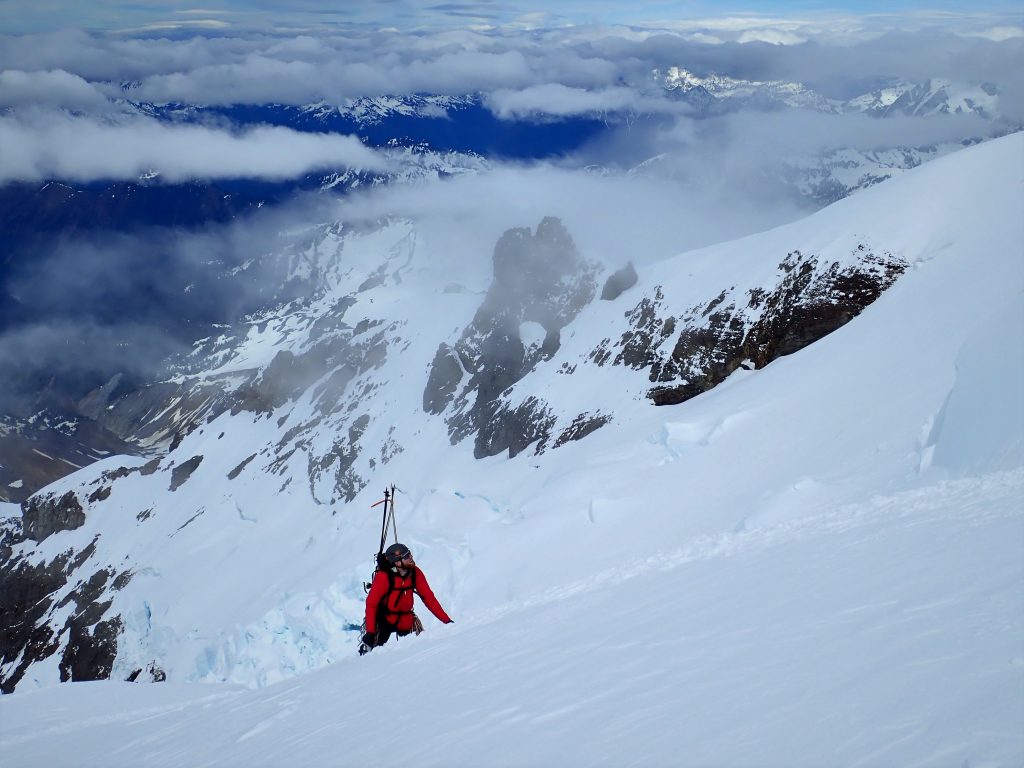 Less than two years ago, Jacob and I climbed the Coleman Deming route on Baker. It was our first big mountain together and Jacob’s first glacial climb. We did not know how to ice climb or ski; we just walked up mountains. So it felt strange planning to climb the North Ridge, the classic ice route, and ski off the summit. Two years had made such a difference.

Jacob picked me up Saturday evening and we drove up to the Heliotrope Ridge Trailhead. The incessant rain stopped, the clouds parted, and we were treated to a beautiful sunset as we drove northwards into the mountains. It was the first time we had seen each other since he graduated from Gonzaga! Graduation was only a year ago for me, but sometimes it feels like decades ago. So much has happened in the last year. So much continues to change in our lives, whether we want it to or not.

We woke Sunday morning at 4:15 am and were on the move by 5. We reached consistent snow a little before the Hogsback climber’s trail and were able to put on boots and start skinning. Pretty soon we were above the treeline with distant views to the Coastal Range of BC.

There were many tents and dry campsites at the top of the Hogsback, but most were deserted, as people were probably headed towards the summit. It was dead calm and peaceful.

Above the Hogsback, we kept traversing up and left, heading towards a crossing of the Coleman Glacier.

The closer we got to the meat of the glacier, the larger the terrain felt. The morning was still and dim, nothing was moving, yet we knew we were moving across a live body of ice. We skinned peacefully through the Coleman Glacier among hundred foot tall seracs and rippling waves of snow and ice. It was one of the most magical experiences I have ever had. I think it was my favorite part of the entire route.

We arrived at the base of the climb to the North Ridge proper at the same time as a party of three on foot. They strategically took a break so we would have to set the bootpack. We took our skis off and started booting up and left between the two obvious bergschrunds/cracks. We disturbingly found a third, hidden crack in between the two, so then we immediately traversed hard left towards the rocks, figuring there are no crevasses in the rock bands (we were correct). The post holing was really, really bad here. The snow was wet and unsupportive. We were very surprised, since the forecast said it should have been below freezing at this elevation the previous day or two.

Once on the North Ridge, the post holing got slightly better, but was still quite tiring. In our typical fashion, I broke trail, allowing Jacob to stay fresh for the technical pitches. The clouds were coming in and out and the winds gusted pretty high, knocking us over sometimes with the sails attached to our packs. Looking back, I would actually recommend saving energy and skinning this whole section to the base of the ice pitches, because it is not very steep and definitely skinnable.

From a distance, it was very difficult to gauge the steepness of the ice cliff, but we knew that the left side had the easiest options. Jacob was feeling good and wanted to attempt one of the steeper sections, so we headed straight up to the wall. I made a belay and he set off into the mist and ice.

The ice turned out to be very brittle and steep, actually overhung. After a good amount of time, lots of hanging from screws, and general physical exhaustion, Jacob wisely decided to bail on this pitch. He set up a V-thread and lowered off, although it was still super time consuming to retrieve all of our gear since he had traversed during the pitch. We probably lost at least two hours at this section and I got really cold at the belay in the snow.

I searched right for easier options, but only found sketchy rime covered rocks, so we backtracked way down and left.

Since Jacob was physically and mentally beaten, it was up to me to lead this pitch. I was not planning on having to lead anything, as ice is not my strength. The easiest pitch we found was dead vertical for about 15 ft. before a small bulge, close to vertical for another 20 ft, and then the relief of gradually less steepening terrain.

I started up. I felt secure and on balance, but with all the weight and skis on my back, I was just pumping out really quickly. I placed a ton of screws, back cleaning as needed, and took rests. Finally, I cleared the steep section (maybe 30-40 ft total) and got onto 60 degree AI2, where I am very comfortable. I ran it out a ways until I was on snow and eventually built a belay with pickets up top. It was an intense pitch for me, but I felt proud of being able to handle it in a safe manner.

Above the belay, we continued to solo up moderate snow. At this elevation, the powder was light, making the post holing only slightly less exhausting. My legs were cramping, but I just kept booting, maybe tens steps at a time before lying down on my knees, partly to rest and partly to not get swept off my feet by the strong gusts. We kept going in and out of a whiteout, but each time the clouds broke, the summit appeared a little bit closer. At one point, there was a rumbling and a huge serac collapsed lower on the glacier and cold white smoke rose hundreds of feet in the air. This part of the route felt completely wild, one of the grandest settings I have ever been in.

As we got closer, we saw faint old bootprints going left to a seemingly dead end of jumbled seracs.

We knew there was some “secret passage” to the left, but we decided just to tackle the bergschrund straight on, since there seemed to be a path that would work.

At the crossing, I found a vertical step of deep, unconsolidated powder. We decided to set up a belay. At the crux vertical step, I had to get a foot waist high and dig my tools deep into the snow as deadmans for purchase. I pulled up with all my might, kicked a high foot, and breathed a sigh of relief. The last difficulty had been surmounted!

Jacob managed the same move and soon joined me on the summit plateau!

It was late afternoon, and the summit plateau was completely empty. We took a good break to finally eat and drink and relax after the long route. I had just suffered exhausting post holing for 3000 ft. with my only break being a steep ice lead with skis attached to my pack! The Sour Patch Kids were delicious.

Lenticular clouds came on and off as we rested. The wind was whipping and it was probably zero degrees wind chill. We wondered if we would be lucky enough to tag the true summit during a period of clearing.

We put our skis back on and skinned across the summit plateau. It was so easy compared to post holing. I immediately felt so much energy returning to my body. I love skiing so much! Especially skinning!

We got lucky, and the mountain gods granted us heavenly views. Clouds swirled in all directions, but we stood alone above the rest. It felt almost as if we were on an island, not the rooftop of the North Cascades. It felt lonely, but it felt right.

We skinned through dreamy, sunlight fog to the top of the Roman Wall. We ripped skins and then dropped down beneath the clouds. It was perfect corn! I had discovered that one of the buckles on my boots had unfortunately broken on the ascent, but I still shredded as hard as one can with fatigued legs, a heavy pack, short skinny skimo skis, and a floppy boot. These are the turns we live for as ski mountaineers. And this is what I am meant to do.

Once we got down to Coleman Glacier, the snow was super mushy and sticky, exhausting our legs even more, but we were too happy to care. We cruised down, following all the tracks and keeping and eye out for new cracks.

We kept skiing all the way down to the Heliotrope Ridge Trail, reaching it maybe a 10 minute hike from where we had left our hiking shoes. Then it was just a short walk back to the cars and a little drive before burgers and milkshakes!

This was a big day for us. We made some mistakes, had exhausting snow conditions, and variable weather. But we learned, stayed positive, and trusted each other. It was yet another one of those crazy days in the mountains that seem to encompass a whole lifetime of highs and lows. These are the trips that forever change your relationship with your partners. With Jacob, I know these changes are for the better.