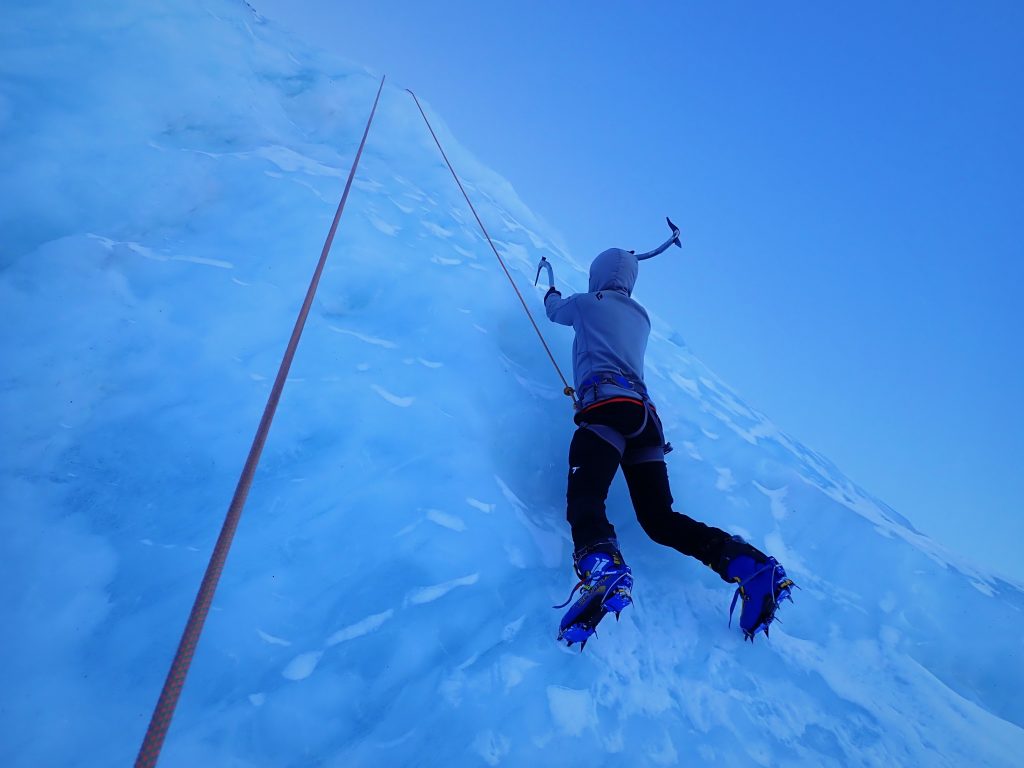 Over the weekend, Logan and I took advantage of the sun and awkward shoulder season in the Cascades to do some ice climbing on the Coleman Seracs. It was Logan’s first “real” time ice climbing (although are seracs even really ice climbing?).

There was a big party from the British Columbia Mountaineering Club heading up to the seracs in front of us. I had actually talked online with one of them about the North Ridge of Baker back in the spring and she recognized me. It was fun to watch them all spread out like a virus across the ice.

Logan and I took it easy. I have been dealing with some challenging emotions lately and did not really feel like climbing much, but I put in a good amount of laps and gradually felt more solid. Logan made great improvements, working on his footwork and stance. We lounged in the sun at lunch, appreciating the warmth on a rather cold October day.

Fall can be difficult in the Cascades. Especially this year, where the snow came so early. For the last month, I have felt like I have been in alpine purgatory, unable to do my big inspiring summer routes but not able to ski or climb ice. Honestly, it has left me feeling rather empty and lost. All the negative emotions I had smothered by big miles and amazing adventures this summer have been bubbling back up. Even though we were not doing anything crazy, at least today we were sharpening our skills. I know this will pay off soon.

In the afternoon, we did a mini multi pitch up the ice fall that involved and incredibly awkward ice arete that I led. Next time, I would just go directly up the face.

After a few more little laps, we made a naked V thread and rapped down. This even involved a fun free hanging ice rappel onto a frozen glacial pond that cracked under my weight.

We managed to weave our way back down the lower angled ice without having to rappel, which was nice. As we gazed back towards the seracs, Koma Kulshan basked in the afternoon sun behind the jumbled maze of crevasses. It is such a bizarre and marvelous sight. It is easy to forget how wonderful this world we live in truly is.

We had an easy hike back and a marvelous drive home, watching the Twin Sisters and Baker turn purple under alpenglow. As we reached I5, the outline of the Olympics was purple in the twilight. Logan and I talked about all the adventures we had planned and the list seemed almost endless. Remote ski lines, undocumented ice lines, there is so much out there in the Cascades if you have the imagination to see it and the skills to make that vision a reality. The only way is up.