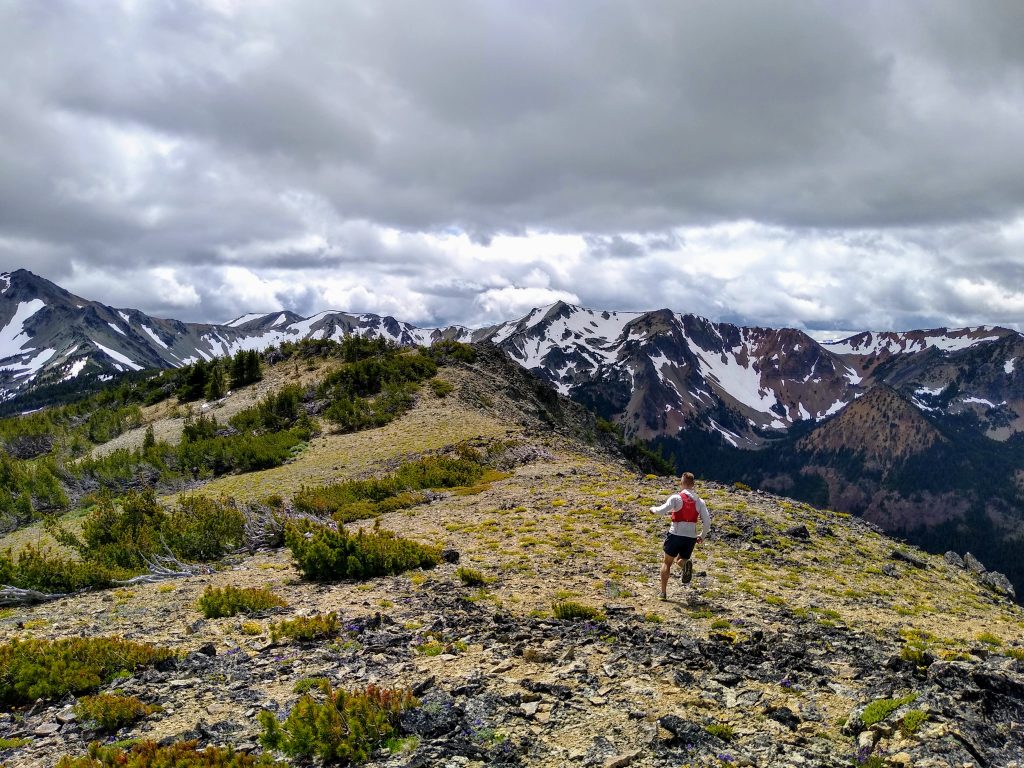 Another summer weekend, another rainstorm headed straight to the North Cascades. Steve and I were once again scrambling (no pun intended) for a backup plan to fill the weekend out. On Saturday, we climbed the west ridge of Stuart. For Sunday, I spent a few minutes looking at the map. SE Cascades, perhaps in the rainshadow of Rainier? That seemed like the safest bet for decent weather. Mt. Aix? Seems pretty high. William O Douglas Wilderness area? Never heard of it. I drew a loop and sent it to Steve. Looks good. Plans made.

It looked gloomy above as we started the climb up the Mt. Aix trail. Sure enough, it drizzled here and there. If nothing else, we would get a good workout. Still, we knew the forecast was for improving weather throughout the day.

At the ridgeline, we forked left off the Aix trail along Nelson Ridge. The wind was whipping us. It felt like sub freezing wind chill. What happened to summer?

We could tell that the clouds were just stacking against this high ridgeline. To the east, we could see clearing, along with brightly colored rocks.

The trail along Nelson Ridge is pretty faint, so we mostly stayed on the ridge through easy cross country travel. As we dropped off into a basin to the north, we found some excellent boot skiing. The clouds were clearing and it became calm. Already, we were pleasantly surprised with the beautiful terrain and wilderness feel of this area.

We pranced through sandy glades and pristine meadows. Further down, we tried to find the trail, crossing on the GPS where the trail should be, but did not really find it. We occasionally found sections of substantial game trails, but then would lose them in the brush.

Given how faint the trail was up on Nelson Ridge, we knew it would be even worse down in the forest. But we also knew that if we did not find the trail, we could be in for a long day. The bushwhacking got progressively worse. We crossed straight down through multiple switchbacks. At each switchback, we found slight grades and signs of a trail, but only slight. Steve and I are very good at following abandoned trails, but this one was beyond gone.

As we neared the valley floor, it was the time of reckoning. We were making painfully slow progress. If we did not find easier travel along the river, we were going to turn around. After crossing the river, we traveled a bit uphill away from the river and stumbled onto a wide open trail! We were elated! It turns on the trail is nowhere near where the maps show it…

We continued down valley on the old Nelson Ridge Trail. This trail was a huge improvement over bushwhacking, but it was not exactly in prime condition itself. The ground was pretty overgrown and there were numerous blowdowns. When we finally reached the Richmond Mine Junction, the trail had completely disappeared in a nice grassy meadow. The trail signs on trees were pretty hilarious.

We took a refreshing lunch break after crossing the river. We knew the worst was past and laughed at how little preparation we had put into this trip. For big North Cascade routes, I’ll spend months reading trip reports, obsessing over maps and satellite imagery, and getting beta from other climbers. I figured that the Southern Cascades would be a walk in the park, but boy, I was wrong. And in a way, it was refreshing to find such an unexpectedly remote, wild place.

The Richmond Mine Trail was easier to follow climbing up to the pass in the Nelson Buttes. Still faint, still lots of blowdowns, but easier.

We climbed into a lovely heather meadow beneath the pass. The biome in the William O Douglas Wilderness certainly unique in the Cascades. There are elements of the Teanaway and Chelan Sawtooth, but it also feels pretty wet. The gnarled pines remind me of the High Sierra. The windswept shrubs remind me of Mt. Rose and East Lake Tahoe. The surrounding desert is like the basin and ranges in the Rockies. It’s got a little bit of everything.

At the pass, we left the “trail” and started directly up the ridge trending SW towards the summit of Mt. Aix. The direct ridge line was fast and scenic.

At Pt. 7146, the views opened up and the entire wilderness unfolded in front of us. We suddenly left the land of pines and entered a very Pasayten-like tundra field. Running was a joy.

There is a distinct moment when you realize you have found something special. We came into the day just looking to escape the rain and see a new area. Instead, we were blown away to find a forgotten wilderness area full or stunning valleys, tundra ridges, and high peaks. Running in the open, heading towards Aix, the climax of the range, we realized that this was not just a throwaway, bad weather day. This was a real, bonafide adventure. Incidentally awesome. Accidentally epic.

We crossed over bumps and saddles, moving across land that held no signs of humans, just some obscenely large hoof prints in the snow (possibly elk??).

Right before the final climb up Aix, we encountered the “Triple Gendarmes”, three extremely chossy towers blocking our path.

We traversed around the first two on the right on ledges. However, the third would require a 100 ft drop to the left to get around. It looked intimidating and loose. I cautiously tackled it straight on, yielding some surprisingly good third class scrambling. Could this day get any better?

From there, it was an easy walk up loose talus to the summit.

Mt. Aix has outstanding prominence. On a clear day, I imagine that the views of Rainier, Adams, and Goat Rocks would be stupendous. But on this cool, windy, moody day, our world was limited to just the steep basins and rugged ridges around us. We had seen no one ever since we left the Aix trail, so it was fitting to be all alone on top of our little world.

We hopped on the Aix trail and cruised back down. Who know’s when I’ll be back to this awesome place?

Going into the summer alpine season, we have these visions of what we would like to accomplish and objectives to tick off. Each year, this list grows longer. Whenever I feel frustrated by weather and conditions preventing me from reaching these goals, I can think back to days like this one in the Williams O Douglas Wilderness, where the mountains genuinely surprised me. Sometimes, I think I know everything about the Cascades, but really, I’ve just seen the tip of the iceberg. In a way, these days are the most special because they remind you that, no matter how hard you try, you will never run out of adventure in the Cascades.