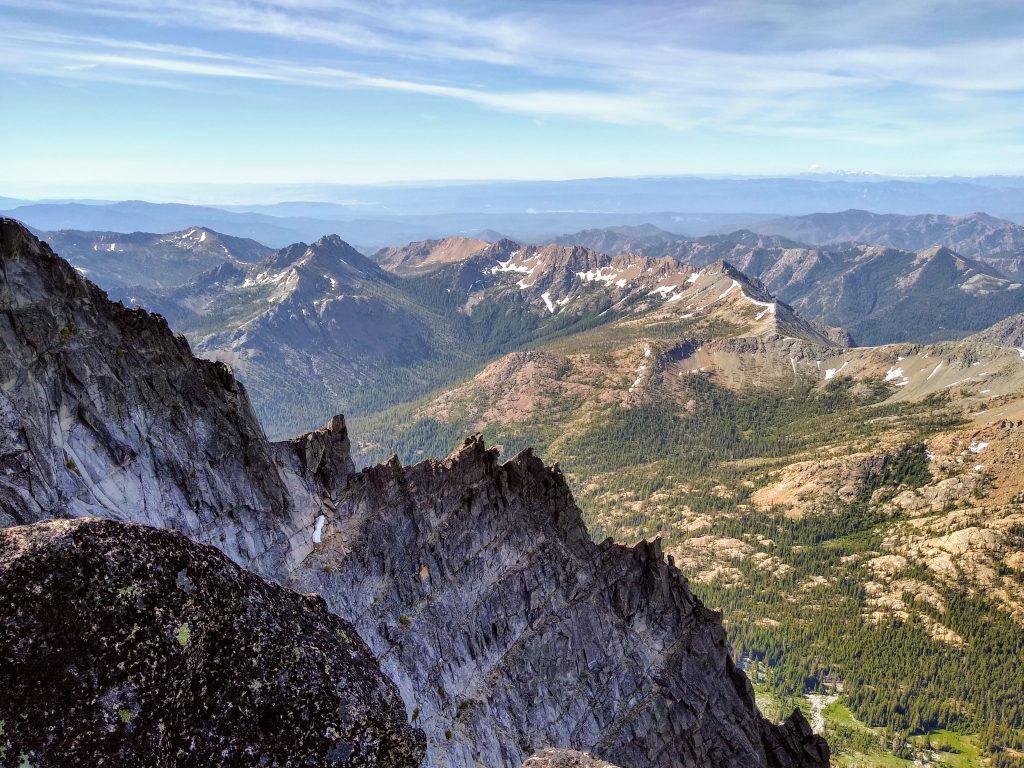 Three years ago, Kylie and I climbed the West Ridge of Stuart and West Ridge of Sherpa in two long, exhausting, stressful days. It was our first big alpine rock climb and we really struggled with managing weight, efficiency, and route finding. Our bladders burst in our packs, leaving us dehydrated. We slept on the summit, snafflehounds chewing through our gear and food. Ropes got stuck on the rappels off Sherpa. We staggered back home after two long days, absolutely beat. Honestly, it is still one of our proudest accomplishments together, considering the lack of experience we had going in.

This time around, Steve and I were looking for a chill, relaxing day, so we climbed the West Ridge of Stuart in a leisurely 11.5 hours car to car. Although there may be too much beta out there for this route already, I’m going to highlight some key route finding decisions that made this climb so much faster. After all, I have climbed the route twice, and in very different ways.

We left the car around 5 am with no water and started hiking up to the pass to Lake Ingalls. We descended to the lower trail to use the toilet in Headlight Basin, but I think regardless, the lower trail is faster, despite having more elevation gain. Even with our toilet stop, we still beat two other climbers to the lake who were with us at the pass.

We wrapped around the right (east) side of the lake on the frozen shoreline. This was definitely quicker than the left side, when frozen. When not frozen, there is slabby stuff, so then I’d definitely go left, following a climber’s trail through the boulders. After filling up on at the lake outlet we continued on.

There’s a trail that descends down a few hundred feet before climbing back up to Stuart Pass. Last time Kylie and I went that way, so Steve and I stayed on the ridge this time. I think it is about equal time wise, but going lower might be easier to follow in the dark.

From Stuart Pass, we followed a well defined climber’s trail up the shoulder, through some shrubs, until it traverse towards the start of the West Ridge route. Really, it should be called the “Southwest Gullies”, no the west ridge. The entrance gully (second from the left) still had a lot of snow, so we started by climbing up the gully to its left (first gully you encounter, furthest west). It took us 3 hours to the start of the climbing.

We climbed sand and some decent scrambling up to the end of the gully, where it peters out into the west ridge proper and a steep headwall. It was easy to cross over here into the normal first gully, just above the highest patch of snow. Perfect!

We continued up on improving class 3 terrain. The enjoyable scrambling here is why I like to refer to this part of the route as “God’s Granite Gullies”, or GGG. At the top of this gully, we crossed right over into the gully beneath Long John Tower.

I remembered this snow crossing as the only unavoidable snow crossing during late July 2017 (high snow year). It was super soft and I needed neither ice ax nor crampons. This time, it was so icy I couldn’t even get any bite kicking with my approach shoes. It was a short crossing, but it was going to be spicy.

We built a rock anchor and Steve belayed me across where someone previously had kicked some semi-flat steps. It was a bit tenuous, but not bad. Steve had the golden idea of using his nut tool in addition to ax for some nice two-tool security. Beta unlocked!

We climbed up the right side of the face beneath Long John Tower before cutting back left to the saddle. This section was pretty sustained class 4, so every move had our attention.

At the Long John Tower notch, the summit is not far above, but is very far away. The terrain in between is a maze of gullies, cliffs, and boulders stacked precariously. I remember this section to be the crux of the routefinding. Last time, Kylie and I took the lower route, going up and down gullies, feeling hopelessly lost, until we eventually found “the tunnel” that gave us passage.

This time, Steve and I tried the standard Beckey description that climbs across a ledge higher near the West Horn. So from the notch, we turned left and climbed up to the top of the ridge. From there, we spied the key ledge just about 50 ft beneath the West Horn.

We did a short pitch for the ledge, which turned out to just be very exposed class 3.

Shortly thereafter, there was yet another steep snow crossing, which we climbed up and around on rock. We continued to descend and traverse, beneath “God’s Cairn” (an upside trapezoidal rock balanced on a tower), and then back up to the West Ridge Notch.

From a nice bivy ledge 20 ft up and right of the notch, we roped up. I gave Steve the beta and sent him off on lead. He lead us up for ~30 meters of easy class 4 and then left around a blind corner onto the north face. A steep 30 meters of low 5th just left of the crest got us to a notch where we crossed back onto the right side of the ridge. Steve then immediately climbed up a short 20 ft low angle chimney with off-width cracks, maybe 5.4 or so.

Note: friends have told me that if you do not want to go around to the north face for a pitch, you can go straight up through mid 5th class cracks to reach the same point. I personally loved the wild exposure of this north side pitch, but some might not like it.

Next, we had a short 15 ft downclimb (the likely crux of the entire climb) and then a traverse right across some ledges. Right before the ledges end, there is a passage up and left through easy low 5th slabby then blocky terrain.

After about 30 meters, we trended right, climbing an awkward mantle around a corner, squeezing through a gap. This leads to the final 5.6 crux, the twin finger/hand cracks. There’s a convenient piton to clip right at the end. It is like ringing the bell at the top of a route. Very satisfying.

We arrived on the summit just as a dude showed up wearing a straw hat and carrying a walking stick! This was definitely the highlight of the trip. He was so stoked just to be up the mountain, regardless of route, technical difficulty, or speed. He didn’t complain one bit of the thousands of feet of loose sand in the Cascadian Couloir. In some ways, he reminded me of 17 year old Kyle – no fancy gear, expectations, just pure love of the mountains. The shitty Cascadian Couloir would have been the highlight of my summer back then. It was a good reminder about what truly matters in the mountains. I think that many of us alpine climbers – often hyper critical, opinionated, snobbish, and elitist – could learn something from the man in the straw hat.

We were also joined by two Index crushers who had just casually climbed the complete North Ridge in 4 hours! 4 hours!!!! All walks of life come together on Stuart! They were also about to descend the Sherpa Glacier with a single tool and aluminum crampons. I’d love to hear how that went…

It had taken us 8 hours to the summit, and after a 30 minute break, we got on our way. If you wrap around 200 ft or so beneath the false summit, you can avoid the steepest snow right at the false summit. We got admonished (and later, on Facebook, publicly shamed) by a group of women for choosing to descend the snow in running shoes. Good thing I didn’t tell them that I climbed the whole west ridge route in running shoes…

The boot skiing was unfortunately inconsistent and rather sun cupped. Then it was onto sand, sand, and more sand. I’ve climbed Stuart three times now, but this was my first descent down the notorious Cascadian Couloir! Climber’s absolutely hate on it, but I found it to be one of the fastest, least painful, least stressful descents of a big mountain I’ve ever done. With poles, it was even soft on the knees, sliding down in the sand. We went top of the couloir to the bottom in an hour.

Near the bottom, I speculated that there might be a trail off into the meadows on the right, just like there is on the descent of Sherpa Peak. Steve told me it was nonsense, but it took all of about 30 seconds to find a trail. This dropped us out onto the Ingalls Creek Trail right next to the Longs Pass turnoff.

Rain clouds were already gathering over Stuart as we said goodbye and started down the other side of Longs Pass. We arrived back at the car 11.5 hours after starting.

This time around, the West Ridge of Stuart was a very different experience. It felt like I had tamed the dragon. Still, it was an enjoyable scramble route with delightful routefinding, a little bit of technical climbing, and epic views, as always.