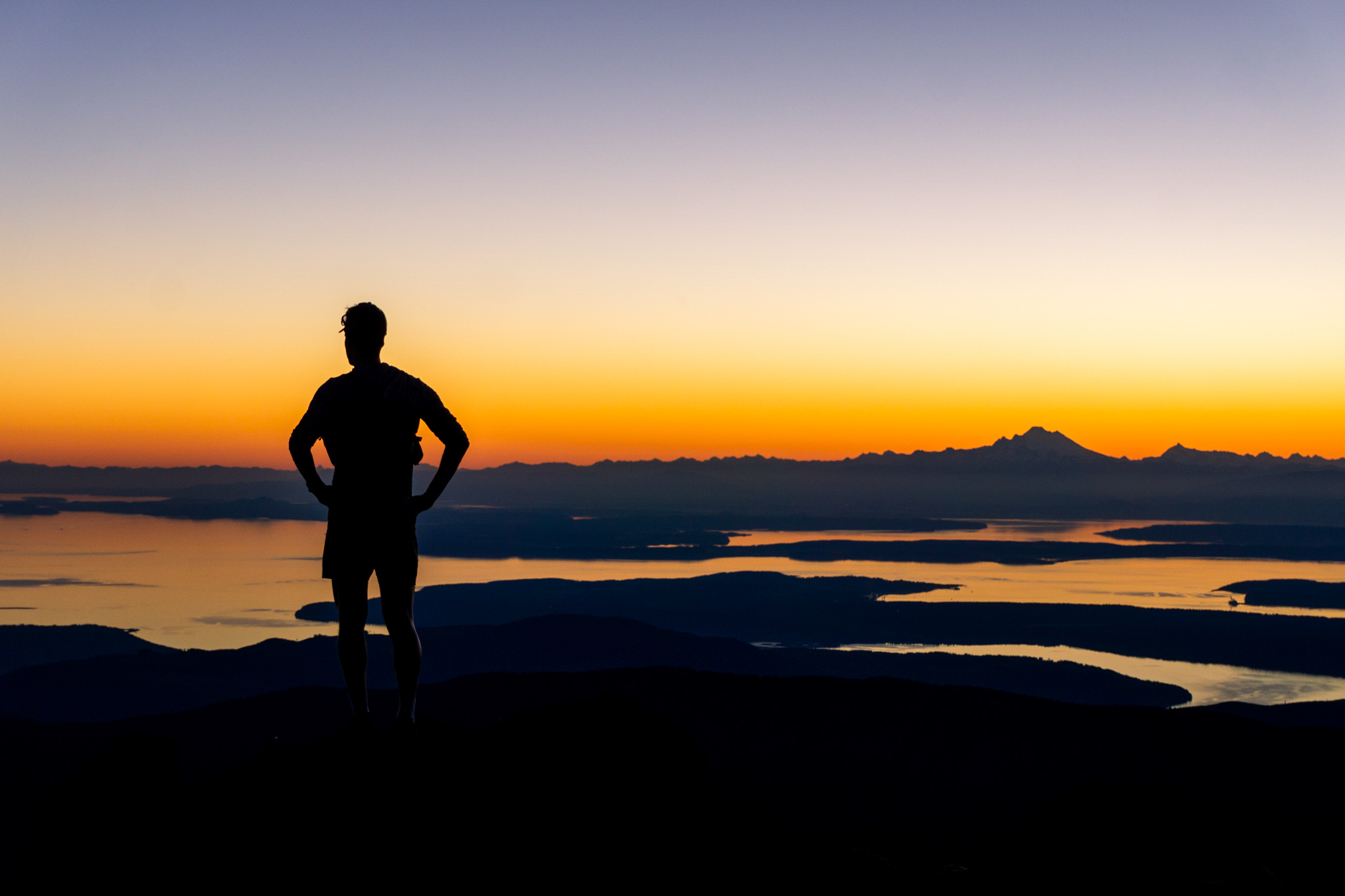 Looks like ridge running is back on the menu, boys

The first true weekend of summer has brought record breaking heat to Washington and Oregon. I planned to head over to the peninsula to stay with my grandparents on the water and do some more exploration in the NE Olympics. The NE Olympics are dry, high peaks with excellent ridge lines that melt out earlier than most of the Cascades, thus providing great early season ridge running. I planned a route from Mt. Townsend to Buckhorn Mountain and convinced Will, Sam, and Tyler to make the trek out there with me.

We drove out Friday night and slept at the the Tubal Cain trailhead. It was a warm evening, probably in the 60s with a light breeze, but I discovered that the moving blanket I had picked up from my grandparents provided no real insulation! During a record breaking heat wave, I ironically slept surprisingly poorly due to being cold until I wrapped another tarp around myself to cut the wind. I will not make the same mistake next time…

We woke up at 3 am and were moving by 3:30 to get an early start with the heat. A few hundred yards up the road, we turned onto the Dirty Face ridge trail. It was muggy already under the moonlight, but brief views of the orange glow on the eastern horizon promised a beautiful sunrise.

We took the small spur trail that leads to the North Townsend summit. The entire skyline of the Cascades, from BC to Rainier, was lit with a burning yellow orange. The light reflected off the intricate network of bodies of water, inlets, and islands of Puget Sound. We could see the shapes of distant peaks which had previously stood upon, and the ripples of wind on the water miles below. I had seen great mountain sunrises before, but nothing truly this vibrant and magical.

We jogged between the two summits of Townsend as we watched the colors go from a burning orange to cotton candy pink and purple. Rays of light burst through the gaps in the distant Picket Range and then dawn was upon us.

It is remarkable how something so simple can be so powerful, how something so familiar can feel so new, how something so complex can be so universal. Familiar faces, new places, wide open spaces. This was the return of adventure running, in all its splendid glory. Nine months ago I injured myself and was forced to change how I moved in the mountains, how I ration my body, how I think about vert and impact. For nine months I had been waiting for this moment. Skiing is great and all, but nothing feels as simple and free as running. It was great to be back.

We could have stayed true to the ridge over Welch Peaks and Silver Lake Peaks, but with the heat, it made more sense to take the trail down to Silver Lake and fill up on water before continuing to Hawk Peak. The air was absolutely frigid around Silver Lake, which was a great welcome.

We continued up easy snowfields and bursting meadows to the Hawk / Silver Lake Peak saddle.

From the saddle, we followed a climber’s trail that wrapped around to the left, avoiding the worst of the jumbled ridge on Hawk. Eventually, we turned directly uphill to reach the summit of Hawk Peak.

We were moving well and continued easily from Hawk over to Worthington. Worthington looks intimidating from afar, but it is easy to weave between the cliffs mostly at class 2.

At what I thought would be the summit of Worthington, we actually saw that the true summit was a ways further westward. The traverse between the two summits looked steep and craggy, but manageable.

I love route finding across ridges like this. Up and down, left and right. Towers, gullys, slabs, ledges that go. It is a constant puzzle that requires focus and exploration. I have found that Olympic ridges provide some of the best non technical ridge scrambling in the state, despite their reputation for poor rock. I have found that the rock is usually solid where it needs to be and fractures in ways that always allow passage at fourth class or easier.

The group was quiet, as we all spaced out and were focused, weaving our way through the rock. We were able to stay remarkably close to the true ridgeline, never deviating by more than 10-15 feet. This section between the Worthington summits was fantastic, probably the best scrambling of the entire route.

The traverse over to Iron goes across a broad, open tundra meadow with weird rocks jutting out of the land at all different angles. It was such a dramatic landscape, very beautiful and unique.

Iron Mountain is yet another long, complex ridge. The scrambling was generally good here also. Will commented how all the scrambling and peak bagging reminded him of the Teanaway Traverse, which we both did last summer.

While the south side of this ridge is generally a long, complex system of ribs, towers, and gullies, the exposure off to the north was constantly impressive and steep.

From Iron, we sized up NE Buckhorn. This was supposedly the crux. The descent off Iron was the worst of the day – 6 to 12 inch rocks that you could count on neither to stay in place nor move. Then there was some ugly Olympic shale down at the saddle.

We descended a ways and then climbed up a dirty class 4 gully to a patch of trees. Although this might not have been the technical crux of the traverse, it was definitely the mental crux because the rock was crumbly and it was rather sustained for 40 ft.

Above that, it was generally pleasant 2nd and 3rd class scrambling on monolithic rock to the summit.

We were all getting tired of scrambling, and fortunately, there was just one peak left to scramble! The descent down NE Buckhorn was a little annoying in places, but not as bad as Iron. The the climb up Buckhorn was pleasant and solid. We reached the summit about 7 and a half hours after starting our day!

During the entire traverse, a breeze had kept temperatures reasonable. But we were nearly all out of water and so it was time to get going before the afternoon heat moved in.

The incredibly long, gradual descent from Buckhorn down the Tubal Cain trail has to be one of the best running descents in the state. The trail is remarkably well graded and rock free for its entirety and the views are sweeping. My knees had been hurting during the last few peaks of the traverse from all the dynamic movements, but I found that I could actually run down pain free if I kept my pace easy, thanks to the well maintained trail! However, my running fitness is pretty poor compared to these guys, so they quickly left me behind.

We hit our first running stream around 5500 ft and gorged ourselves in water. I dunked my shirt, my hat and prepared for the long, hot descent. Will took a detour to Buckhorn Lake to jump in, while the rest of us just headed out.

Copper Creek was nice and cool, but the air temperature got very hot as the trail left the bottom of the valley. Fortunately, there were many seasonal water sources to dunk our heads in and stay cool. Right as we arrived back at the cars, we heard footsteps behind us and Will caught up to us! Perfect timing!

The Townsend to Buckhorn Ridge Run was an incredibly fun day with an awesome group! At times, I have felt pessimistic about my ability to run and move quickly through the mountains this summer due to my injury. Although today was not pain free, it was reassuring to know that I will still be able to get out and do the things I love this summer. Let the ridge running begin!