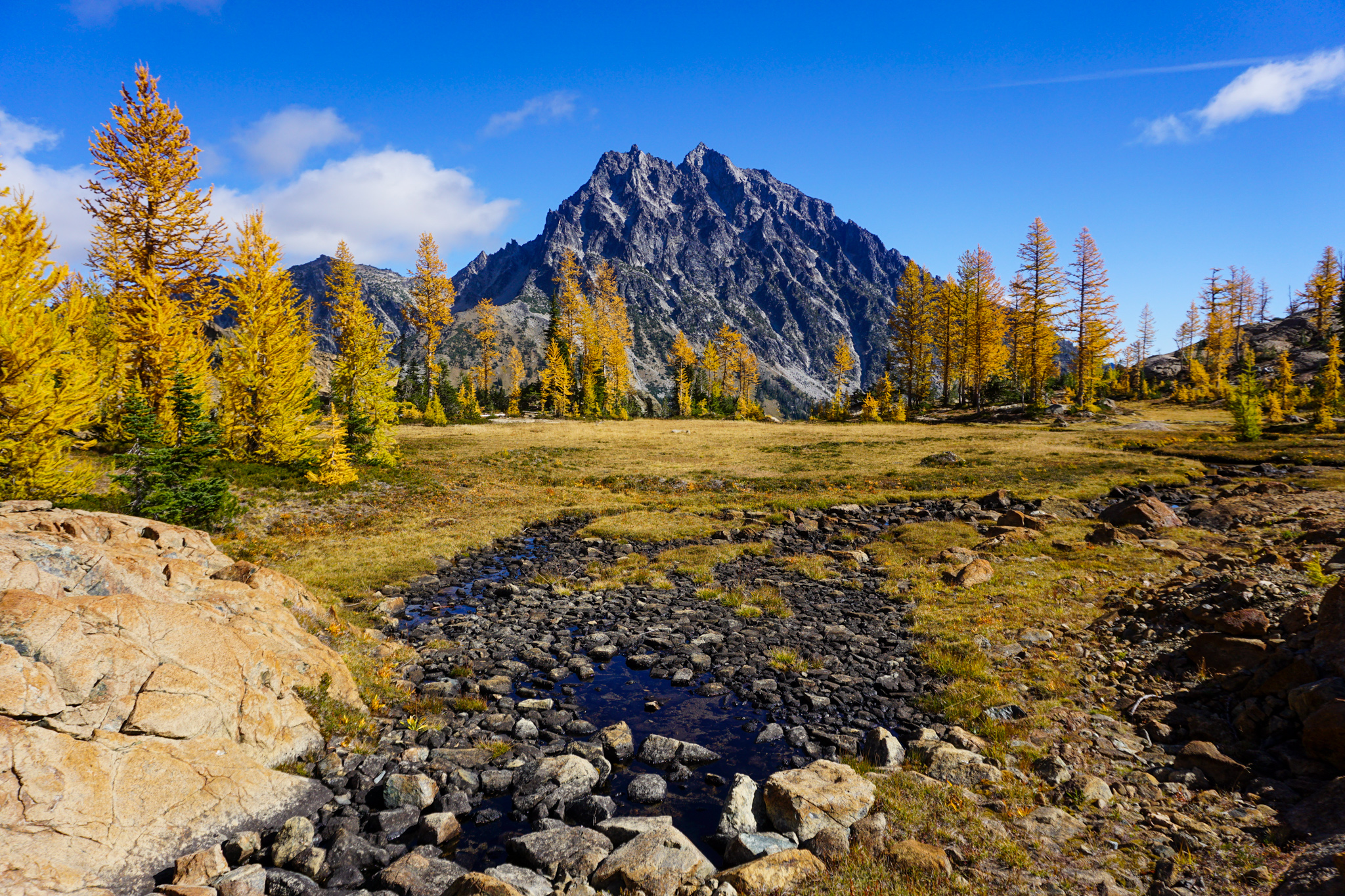 My birthday falls each year during the peak of fall colors and Larch Madness here in the Cascades. This year, Kelly offered to car shuttle me as a birthday present. I wanted to do something scenic not too far from home, so I drew up a route in the eastern Alpine Lakes Wilderness from Scatter Benchmark to Navaho Pass, covering some scenic but relatively quiet terrain.

I invited my friends Chris and Bryan, two really experienced ultra runners, to benefit from the car shuttle with me. Kelly dropped us off at the incognito Scatter trailhead in the morning and she departed back to the Base Camp in Roslyn to read and pass a few hours.

People do not use this Scatter trail that much and it is pretty faint with numerous blowdowns. Some mountain bikers we talked to at the trailhead are doing some maintenance here, so thanks to them! But the turnoff was obvious and we continued uphill towards the shoulder of Scatter Benchmark.

My friend Cherlyn is determined to have to the definitive larch hiking guide in Washington and was curious if there were larches around Scatter. I can confirm that there are some.

We were grateful for some sunshine as we crossed the ridge of Scatter Benchmark. Clouds engulfed the peaks just a few miles away, but we were just far enough east on this brisk fall day.

The trail dropping down the backside towards Van Epps Pass is extremely faint and disappears in a few meadows. This area feels incredibly quiet and peaceful, especially in the fall.

At Van Epps Pass, we joined the Teanaway 100 course briefly, which Chris is familiar with. We took the trail to Lake Ann, where we encountered the first people all day. Lake Ann is a second tier larch hike, drawing far less traffic than Lake Ingalls, which starts at the same trailhead.

At the pass above Lake Ann, we headed up the shoulder towards the summit of Fortune Peak. The west wind was strong and it was quite cold, but the clouds cleared up from the summit just as we reached the top.

We followed the ridge off Fortune down towards Headlight Basin and the Lake Ingalls trail. The framing of this section was absolutely perfect – mighty Stuart, golden larches, and blue skies. This was definitely the most stunning section of the route.

We hopped on the Ingalls Way Highway and made our way to Lake Ingalls. It actually was not quite as crowded as we expected, but still pretty busy. I always forget how long it takes to scramble around the side of Lake Ingalls.

From here, we descended into Ingalls Creek. The trail was much rockier and brushier than expected, making for slow downhill running. This was a common theme of the day. The trails were never hard, but consistently slow. This really slowed our downhill pace and took more energy out of us, or at least me. Bryan is not fazed by anything.

From the pass, we continued on the “County Line Trail”, weaving between passes on the backside of Marys, Bean, and Earl. I have done the ridges of the Teanaway Traverse a few times, but never gone on trails through here. I found the trails to be remarkably quiet and faint, traveling through beautiful conifer glades. Springs and water were surprisingly abundant in such a dry region in the fall.

I lagged behind on the final steep, sandy climb to the saddle next to Wrong Turn Peak. At the pass, we saw a figure running down the ridge to us and it was Kelly!

After one last break, we took off down the moonscape terrain to Navaho Pass and then began the long gradual descent out to the Stafford Creek Trailhead. The well groomed trail and gentle grade was a welcome change after so much rocky and uneven trail all day.

This was a highly enjoyable run through the extended Teanaway environments, although it definitely kicked my butt a bit more than expected with the variable trail conditions. While the views were never that epic, it was consistently beautiful and remarkably quiet. It was a perfect birthday present and a great way to close out another incredible alpine season. You are the best, Kelly!

3 thoughts on “Teanaway Thru Run”