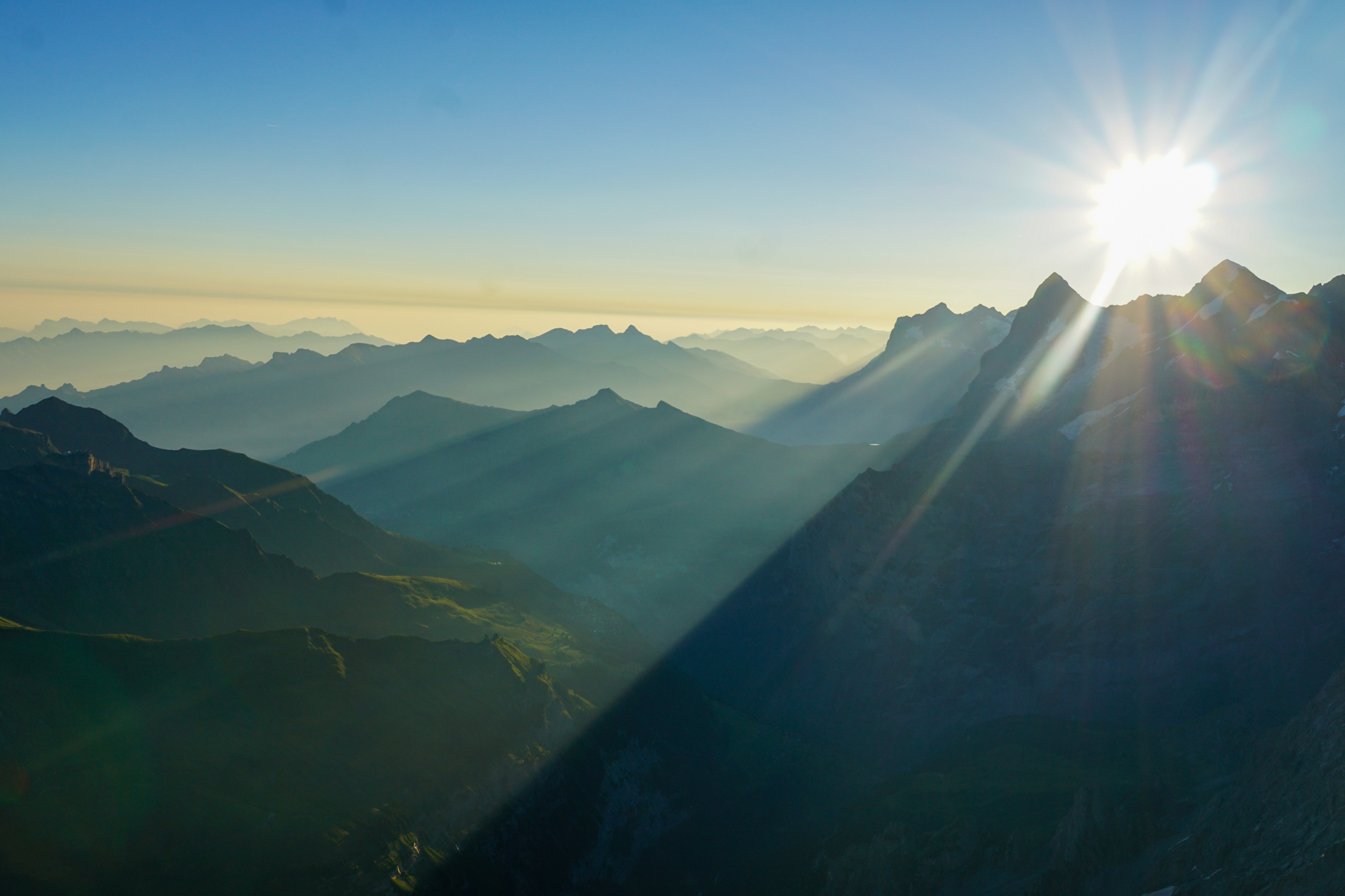 Although we spent most of our time in Europe just bouncing between AirBnbs in towns, we wanted to do one hut-to-hut hike. The Alps have hundreds of “huts” that serve food and have beds, much like hostels. My friend Silvia recommended that we hike between Kandersteg and Lauterbrunnen, two towns in the Bernese Oberland of Switzerland.

With afternoon thunderstorms in the forecast, we got an early start checking out of our place in Zermatt and took the train back to Täsch, where we picked up our car. Our friends had warned us about the “car-train” to get to Kandersteg, but it was still a joy to drive onto a train. Our timing was impeccable and the train immediately started moving through the tunnel, coming out in Kandersteg! Think of it like a ferry, but a train instead of a boat.

Kandersteg is home to the world famous lake Oeschinensee. You can take a lift most of the way there and there is even a “mountain coaster” (roller coaster) at the top! We opted to get a boost from the lift since we still had 4k ft to gain after that!

We took the high trail around Oeschinensee. It was pretty stunning with high peaks above and cascading waterfalls down to the lake.

The receding Blüemslialpgletscher carved out a giant moraine, and the trail follows the moraine wall improbably, with a steep cliff above and below.

We reached the hut just as the first drops of rain started and eagerly snuck inside. The afternoon consisted of napping, reading, and playing cards. We met a couple from LA on their honeymoon (is everyone in the Alps on their honeymoon?) and chatted with them. Only in the evening did it really finally start to pour.

Our second day was short and steep. We woke to a mix of clouds.

Our hike began with a steep 3,000 ft descent, much of it on stairs in the fog. For once, it was finally cool, so we enjoyed the mist.

At the valley bottom, we followed a bridge across a deep ravine in the bedrock. This was a 20th century moraine and as the glacier receded, it revealed a 200 ft deep slot canyon that the glacial melt had carved into the limestone. It resembled the slot canyons found in Utah. I had never seen such a feature in glacial terrain. In the foggy mist, it was absolutely beautiful.

We reached the GspaltenhornHütte around noon and had the rest of the day to kill. We played an intense round of Jenga with some Swiss kids and had a great dinner time conversation with a couple from South Africa and Brussels. Hut life in Europe is very social, and it is fun to find the other English speakers and hear their story and where they came from.

Day 3: Gspaltenhorn and Exit to Lauterbrunnen

I had done a tiny bit of research and found that the Gspaltenhorn was perhaps a manageable summit. It was graded PD+ and II+, which roughly translates to low 5th class. I brought a helmet and figured I would go check it out.

I woke up for the 4am “Mountaineer’s breakfast” and started hiking up the steep trail. By the time I reached the saddle, it was starting to get light and my pace slowed to snap pictures.

I knew very little about the region and the route. So it was extra exciting as every moment brought new texture to the landscape beneath me and a new part of the route ahead. Sunrises are so fleeting, filled with beauty and promise. Every moment something changed and my head was on a swivel, reveling in the ephemeral bliss. It was like I was 17 again and experiencing everything for the first time.

The crux section of the ridge was generally a traverse with some ups and downs. There was a low 5th class chimney downclimb that was surprisingly secure and solid, although there were bolts if you wanted them. There was additional wonderful knife edge scrambling, followed by a few hundred feet of fixed ropes that might have been airy 5.5 without the aid. I embraced the Euro way and yarded up the rope. Yet another unplanned via ferrata!

The rays of light shot through the gaps between the Eiger, Mönch, and Jungfrau, signaling morning in the little hamlets far beneath me. The layers were strong and illuminated, just like a morning in the Cascades back home.

I caught up to a group of two on the summit. Here, I had a great view of the larger glaciers towards the interior of Switzerland.

I descended in time to reach the technical section just as all the morning parties were getting there (and of course they were short roping). I got a few “So fast! Be safe…” comments and then raced down to the trail to the hut. It had only taken me 3.5 hours hut to hut and some people were still finishing breakfast. They asked me if I turned around at the saddle and did not believe that I had made it all the way to the summit. Does this make me an American Speed Monster?

Kelly and I packed up and continued hiking towards Lauterbrunnen. We managed to get to the pass without hiking in the sun – praise the shade!

We had original planned on stopping for a night at the Rotstockhütte but decided a few days ago to skip it. In the Alps, you pay in person at the hut after dinner, so if you do not make it, you have no way to pay. We stopped in to give them a notice and the grumpy woman behind the desk demanded we still pay half fare, which I did. There was no thank-you or acknowledgement that we could have just skipped the hut and not even paid a single cent…

It was a long 6,000 ft descent to the valley floor, but the views were beautiful and there was shade down low, so it went pretty quickly.

We arrived in Stechelberg and had lunch before taking the bus to Lauterbrunnen.

Lauterbrunnen is a big tourist town, set in a stunning valley with steep limestone cliffs on both sides. It is famous for its waterfalls – 72 of them supposedly – but there were only a few this late in a dry summer. You can also watch base jumpers take off every few minutes on both sides of the valley.

This hut trip was very enjoyable and relaxing. The hiking between huts was rather short, but it was nice to take some time to read and nap after so much travel in Europe. Climbing the Gspaltenhorn made the experience even better and completely different. Welcome to the Bernese Oberland!

2 thoughts on “Kandersteg to Lauterbrunnen”