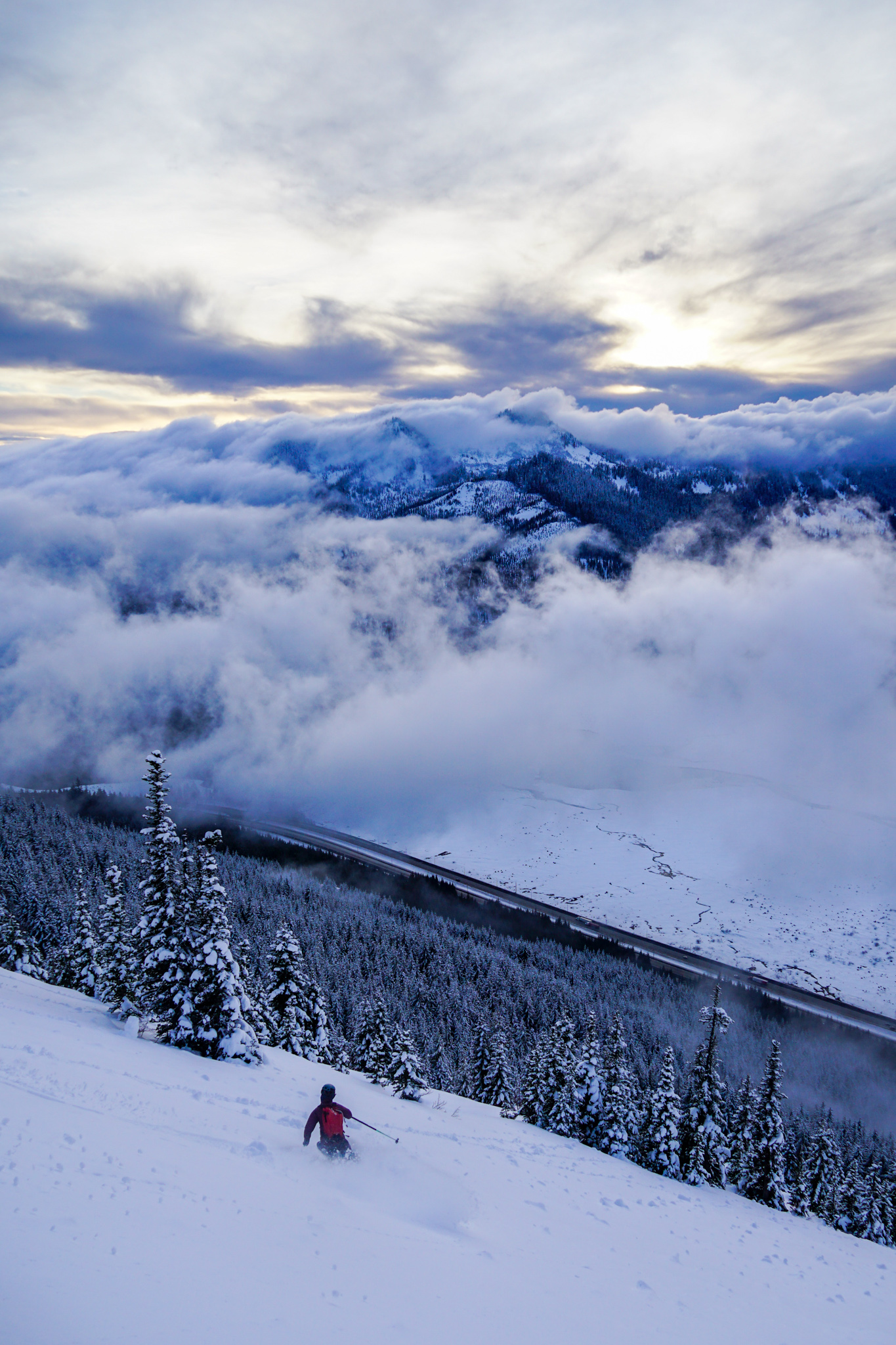 As one drives east on I90, there are some enticing looking glades and clearcuts above Exit 54 just east of Snoqualmie Pass. I have looked at these lines possibly hundreds of times, if you count summer also. Yet I never really heard of people skiing them. From a skiing perspective, access was the problem, as dense new growth forests seemed to prevent access.

Earlier this season, Rio and I explored some of the skiing above Exit 54 and the Gold Creek Sno-Park. We ended our run by skiing down the western end of the “I90 Glades”. It was a fun tour, but terribly inefficient for skiing the I90 Glades by themselves. I figured there must be a better way!

The Rampart Ridge region is a maze of decommissioned logging roads. While browsing satellite imagery, I discovered a road system that led uphill from near the end of the Gold Creek Sno-Park, giving quick access to the ridge above the glades!

This sort of exploration is perfect for a dusk patrol. It would give us the opportunity to figure out the terrain and what the zone has to offer. So Logan and I set off one afternoon from the end of the road of the Gold Creek Sno-Park.

We followed the main snowmobile road for a tenth of a mile before branching off to the left on an obvious logging road. It was a little brushy at first, but quickly got better. It was in much better shape than the road Rio and I had used for the Dungeon Trees, or maybe just the snowpack is better now. But this road appears to get a decent amount of snowshoe and ski traffic!

We followed this road for a few switchbacks and a right turn at a Y before it ended. Here, a marked backcountry route continued, with the blue diamonds!

We followed the markers briefly, but lost them and just turned uphill. The skinning here was through moderately tight new growth trees – not bad, but definitely the most annoying part of the route. But soon enough we popped out on logging roads and kept plowing up the ridge directly to our north. We got above the clouds and watch the easterly winds carry fog up the valley, creating beautiful lighting.

We followed the ridge all the way to about 4500 ft. From here, there are quite a few ski options: old growth trees a little to the north, awesome open runs and glades to the southeast, and of course, our I90 Glades to the west. There is a ton of ski potential in this area!

We transitioned here and dropped into the I90 Glades. They are cliffy at first, so we carefully picked our way through small trees before entering more open slopes. The south facing cliffs had deposited large avalanche debris with maybe half a foot of fresh snow on top of the debris. It skied shockingly well. Perhaps the debris never froze, but I have never skied such fun avy debris!

We followed the open shot down to 3500 ft, where we hit another logging road. We zipped down this road, which has a decent grade, to another clearing visible just above I90. Skiing this clearing, followed by a few hundred feet of tight, but not terrible, trees, dropped us off right at the original road we skinned up. How convenient!

I love micro-adventures like this quick afternoon tour. Researching with satellite imagery and other digital tools and then exploring in the field is such a fun process to unlock new zones! With my work on the Cascade Backcountry Alliance this year, I have focused on under-utilized zones, and this is definitely one of them. I hope more skiers and snowshoers get after it and explore this part of Snoqualmie!