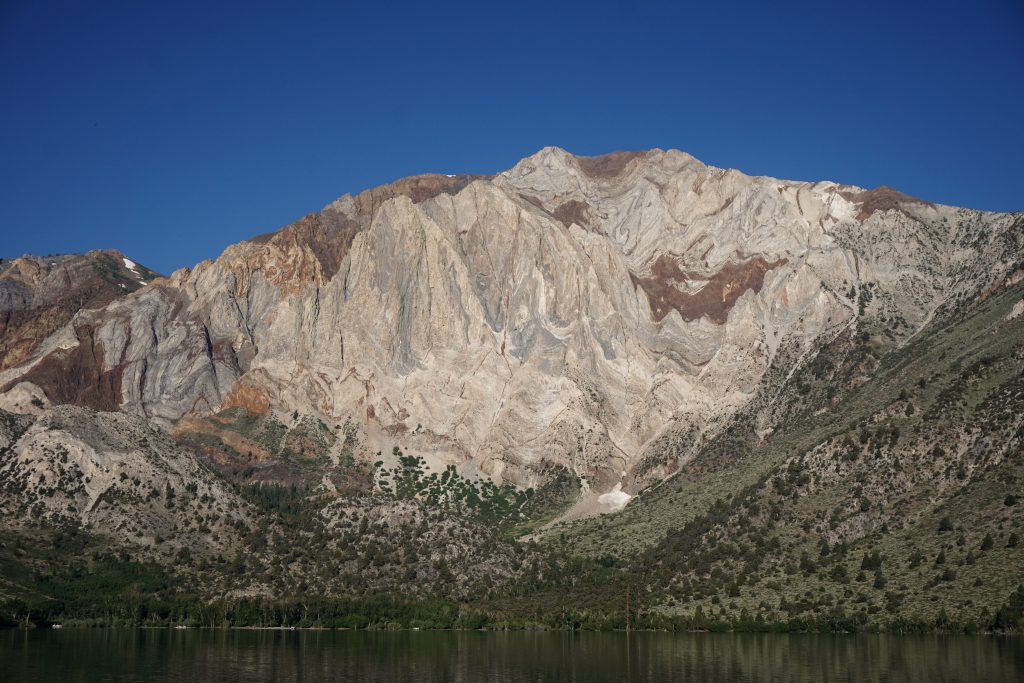 As Kylie wanted a rest day between our climbs of Bear Creek Spire and Temple Crag, I found Laurel Mountain in the guidebook and figured it could be a good half-day scramble. As a bonus, it started and ended from Convict Lake, a nice lake Kylie could hang out at in the heat of the day.

We had a slow morning at the lake shore, making pancakes and such. There were lots of families out fishing on the Fourth of July, but not too many boating surprisingly. From the lake shore, Laurel Mountain rises more than 4000 ft very quickly. The Mendenhall Couloir, my route, ascends the complex gully system straight up the face. It looked incredibly steep from the lake, but I knew the route was mostly 3rd and 4th class with some low 5th. 3500 ft long with supposedly “a maze of gullies” and tricky routefinding, the guidebook called for at least 4-6 hours just for the climbing part alone, but I figured this kind of climb was my strength and it wouldn’t take me that long.

We happened to be on the south side of the lake, although the normal approach is a short 1 mile trail from the north side. I saw on the map a trail around the south side of the lake, so I figured I would take that instead for convenience. At the inlet of the lake, the river was raging pretty hard, so I couldn’t find a dry river crossing. I kept traversing up into the brush, looking for an easy crossing, and before I knew it, I was in thick, dense, thorny Sierra brush! The next 20 minutes was some of the worst bushwhacking I’ve ever done, climbing through uncomfortable desert underbrush. Eventually I had to cross the river to get towards the main trail and again I could not find an easy crossing because the lack of thick logs to fall across. I had to wade thigh deep in a fast flowing stream, one of the more difficult crossing I’ve ever done. On the other side, I climbed out of the gully into brush so dense that I literally had to climb up to the treetops and traverse branches to get out. Yup, it was that bad.

Shortly, I stumbled across the main trail and got up to the little snowfield that marked the base of the route, 45 minutes in. I probably lost close to half an hour in the brush, but I was back on track! I stayed on the sides of the gully initially, avoiding some wet rock, but soon I entered the center of the gully, which was fun and fast scrambling. I stemmed, I ran, I jumped, I even jammed a few times. I was flying up the continuous 3rd and 4th class rock.

The route finding on this route was supposedly complex and difficult to identify, but I found this to be completely untrue. I stayed right at the first junction, and then generally kept going left as much as possible and it worked flawlessly!

The rock color and texture throughout this route was very diverse and continuously changing. The reddish rock was slippery but positive. Higher up there was textured silver rock with small finger cracks. One excellent section was probably a full 50 ft of 5.3 finger crack, which I slithered up in my slippery running shoes. Some sections were deeply scoured, giving the feeling of climbing up a deep canyon. Don’t climb this route when wet! It’d be a continuous waterfall.

With about 1000 ft left, the rock began to disintegrate into terrible Sierra choss. I scrambled left and right trying to find better rock, but to no luck. This last bit kinda sucked, but I soon popped out directly on the true summit! I checked my phone to see that I was 2:40 in, which means I sent the 3500 ft route in under 2 hours! Peter Croft, one of the greatest climbers ever, took 2 hours from car to summit. Not bad, considering this was my rest day.

I radioed Kylie to let her know that I would be descending to the north side of the lake so I would need to be picked up there. The descent went quite fast, although it was predictably loose and dirty. I had to stop and empty my shoes of rocks a few times, but at least I was able to scree-ski at some points. I arrived back on the normal trailhead at about 4:30 roundtrip. Kylie and I went for a swim in the cool lake, and then drove towards Bishop for some ice cream and Fourth of July festivities!