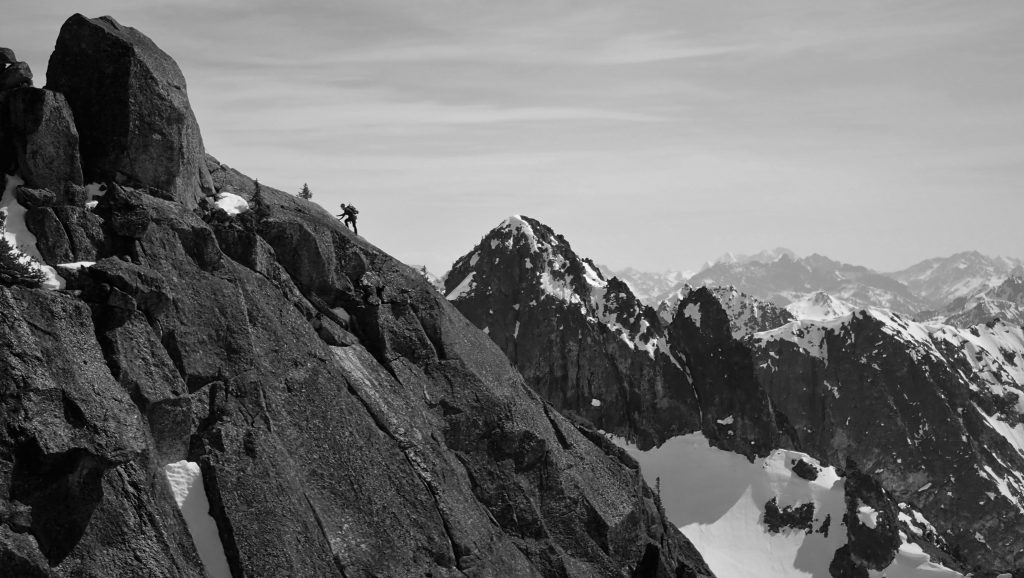 With all the warm, dry weather recently, Jon and I figured that the Liberty Bell Group would be good for some rock climbing. He had been asking me for over a month to go climbing and skiing at Washington Pass. This weekend offered a unique opportunity: ski from the car to the base of the spires, then rock climb (hopefully) dry rock.

We got a late start and left the Blue Lake trailhead around 9 am. There was snow from the car, but it might not last another week or two. We made good time through the forest and opened up into the meadows, where we had good views on a nice sunny morning.

We got to the base of the route in a little over an hour and racked up, which was a little difficult with sloping boulders and snow everywhere. Switching from ski boots to rock shoes is a dream come true!

I led the first pitch, which features some 5.7 face and a 5.6 chimney. I had not led anything outdoors or climbed trad in over 6 months, so this was a good warmup. We brought so much gear, practically a double rack from fingers to off-width, and it really weighed me down.

We were now looking up at the “Zig Zag Flakes”. They appeared large and steep, but supposedly the climbing was not too difficult.

I started up the pitch on lead. There were many sustained, committing 5.9 laybacks. I was having trouble trusting my feet since they were still wet from the snow on the previous pitch, but I kept plugging gear and moving.

The upper part of the pitch was very steep and committing! I had to layback super hard on my feet and trust them against the rock. I was a little intimidated, but made the moves quickly before my weak arms tired out and reached the belay. A full value pitch!

We were now staring up at the famous NW Corner. Steep, wide, burly, alpine 5.9. If there was any pitch made for Jon, this was it. He loves off-widths even more than he loves fist cracks!

After 30 ft or so, the crack is supposed to get easier, but unfortunately this is also when it got wetter. Every jam was wet and his feet struggled to stick when not jammed in the crack. Still, Jon persevered and eventually finished the pitch. It was a long battle, but truly inspiring to watch!

Jon had to move some snow to set up the top anchor, and in the process knocked a lot down on me. So by the time it was my turn to follow, the damp rock had turned to a flowing stream of water! I had no other option but to fully commit to the crack and ascend it fist over fist. It was quite possibly the hardest (or at least burliest) 5.9 of my life.

The belay was a funny site. Jon was stuck behind a huge mound of snow filling this cave. This snow mound is what made the previous pitch so wet. We’re not sure how so much snow got into this cave, but it certainly has been slow to melt. I didn’t want to crawl over the snow so I hung out on the slab and exchanged gear and the pack with him.

Looking at the next pitch, there was a unprotectable slab traverse up and right from the snow mound. It did not look too difficult, but the rock was a little damp and my shoes were still wet. I made a few cautious moves and right as I reached a secure horn, my foot blew! I tumbled probably 25 ft down the slab before penduluming into a wall!

I quickly alerted Jon that I was alright, although I knew I was bleeding all over: inside my pants, on my hands. Fortunately, the snow mound seemed to have “caught” my fall slightly as the rope sliced through it and limited the impact of everything. I crawled back up to near the belay and reassessed.

I looked at the features of the slab and decided for one move to the left of where I had previously worked. It was one of those intensely focused and personal moments in the alpine, where you feel your actions symbolize something far greater. I found some hidden holds and made the moves. And on each hold, I left my red mark of pain and mistakes. But it felt so good to put that fall behind me. Maybe someday I can put the bigger falls in life behind me.

The rest of the pitch had some pretty real 5.9 hands, fingers, and hand crack bulge! I was pretty tired and beaten, but found the strength to pull through these sections. And after Jon reached the belay, we gave each other a fist bump and finished the scramble to the summit!

It was Jon’s first time on one of these summits, and possibly the finest views he has ever seen. Way to go Jon!

I caught a cool sequence of climbers finishing up the SW Rib of South Early Winters Spire.

We opted to take the bolted rappels down the face. These rappels had super clean pulls and were actually kind of fun!

When we got back to our gear, we switched back to ski boots. Unfortunately, Jon lost a ski while he was trying to put it on and it went sliding down the slope. I skied after it and caught it after it lost maybe 400 ft vertical. Jon had to ski down to it with one ski through heavy, mushy snow, but thankfully he is a great skier and could handle it. It would not have gone as well if it was me!

With both skis back on, we were able to shred back to the car, zooming through the forest. It was so much fun to go straight from rock climbing to skiing and the descent went super quickly!

Overall, we both had a great time on the NW Corner of NEWS, although we both felt it was a little burlier than we expected, but the wetness probably played a big factor in it. The climbing is quite sustained at 5.9, with significant sections of 5.9 in each of the last 3 pitches! We would love to come back and send the route again when dry.