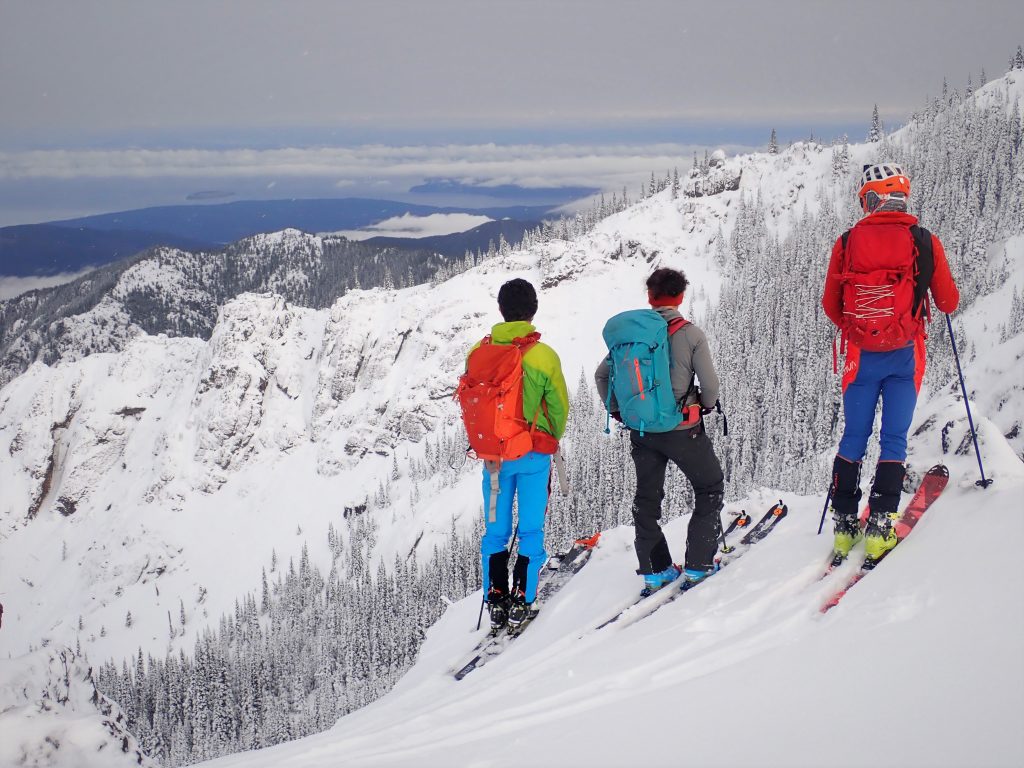 Skiing in the Olympics!

On last minute notice, I linked up with Porter and his friends Lael and Peter, who live in Port Angeles, for an awesome tour of B Peak in the NE Olympics. I was planning on visiting my grandparents in Kingston for Christmas Eve anyways, so when I got a text from Porter at 9:30 pm, saying that pow was so good they were going back for round 2, I worked out plans to take an early ferry to Kingston and meet them in the morning.

My grandparents were a little surprised when I appeared on the early ferry Kingston, but they picked me up, made me a nice breakfast and sent me on my way nonetheless! I am so lucky to have such wonderful grandparents!

We all met at the turnoff to Palo Alto Rd. and piled into Peter’s small Subaru. Even though I had never met Peter and Lael before, I immediately felt at ease with them. They are brother and sister, just younger than me, and possess a great passion for moving quickly through the mountains and practicing all disciplines of alpinism. Plus, they are awesome people.

There was impressively little snow at 3000 ft so the drive to the trailhead was easy. We hiked through a steep forest with minimal snow all the way to where we broke out of the trees at 4800 ft.

The snow depth suddenly increased in the open so we were able to skin. Peter forgot his skins at home, but luckily had a smaller pair of race skins in the car. The tip attachment was wrong, so he had to strap the skin on, and even then, he had limited surface area contact, making skinning the sun-crusted south facing slopes challenging. Luckily, Peter is faster than all of us so he just booted up.

The view as we crested the ridge at 6000 ft between B Peak and Tyler Peak was mesmerizing. The snowy mountains dropped away to the flat lowlands of Sequim and the Strait of Juan de Fuca. Dungeness Spit was a prominent feature just beyond Sequim. Vancouver Island lay in the distance. Something felt so weird, thinking that we were about to ski powder within sight of the ocean. There are few places in the world where this is possible.

It occurred to me that someone in the town of Sequim, with a high powered telescope, could be watching us ski. If they were watching us, they saw a bunch of marginal skiers on light, skinny gear leaning too far in the backseat. To keep up with this speedy crew, I had brought my 84 underfoot skis. In the deep, slightly variable powder, it was easy to find my balance too far forward or too far back. Still, it made for fun skiing, but I definitely wished I had my 108s.

We took a good 1000 ft run down quality north facing snow before skinning back up.

For our second run, we decided to check out one bowl to the east, closer to Tyler Peak. Peter and Porter skied a tighter line, while Lael and I skied a beautiful open 35 degree face. We swooshed through the turns, fast and playful. The snow here was even better than before, some of the best I have ever experienced in Washington!

We got into a rhythm, skinning, ripping, and skiing. Peter remarked how this was the most efficient group of four he had ever toured with; we were all quick at transitions, could kick turn, and ski decently.

Throughout the day, clouds were slowly moving in. Lowland fog rolled over the hills and the Sound, while high stratus filtered the sunlight, reflecting in the snowflakes as they fell softly. The air was completely still. Everything was peaceful. It was one of those magical days where the light feels almost dreamlike, and the snow so dreamy.

Eventually, it was time for one last run.

The ski back down the south side of B Peak was very different in nature. We jump turned our way through the manky breakable sun crust. Maybe this crew doesn’t look the best shredding at high speeds, but we can certainly jump turn like the rest of our tight-clad skinny-ski brethren!

Thank you to Peter, Lael, and Porter for sharing a special day with me in the Olympics! We have a spoil of riches here in Washington, so much so that it is difficult to find the motivation to travel out to the Olympics, especially with relatively poor winter access there. But with proper conditions, the skiing in the Olympics is truly a special, unforgettable experience.