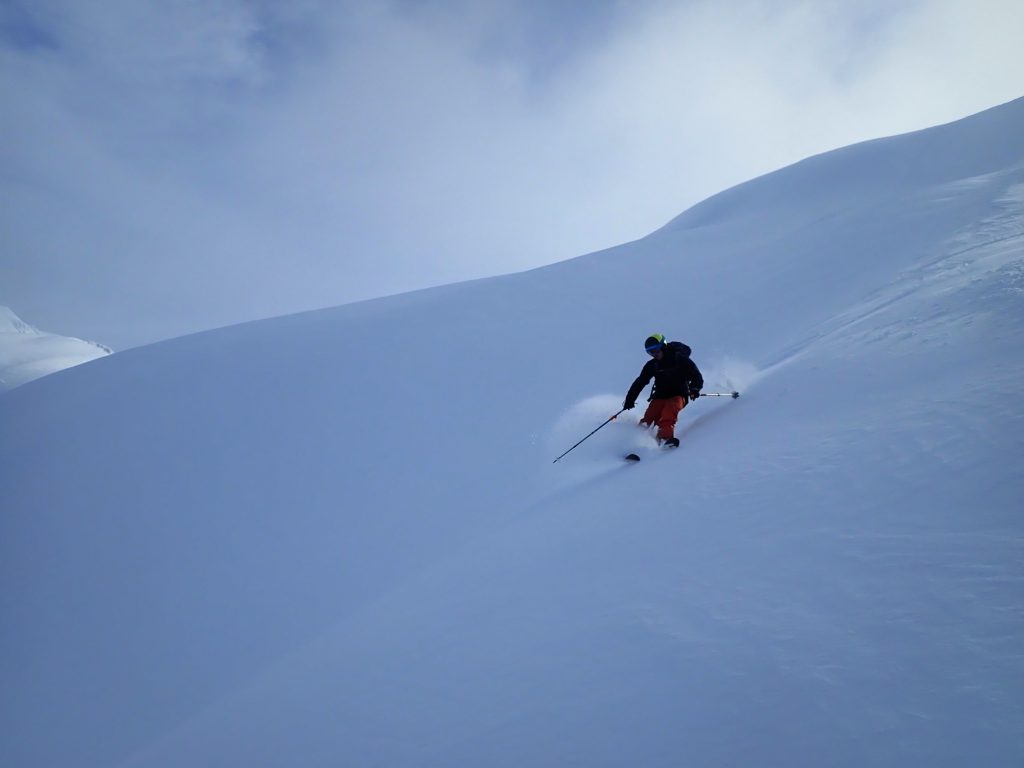 Deep in the Baker Backcountry

With the first bluebird forecast in a while and somewhat stable snow, Jon and I decided to check out a more remote zone of the Baker Backcountry, the Mt. Ann zone. Mt. Ann and Annette are two 5600-5800 ft peaks south of Shuksan Arm near Lake Ann and Mt. Shuksan. They are not any taller than other peaks in the area, but have large, complex, alpine terrain. Plus, we thought the position underneath Shuksan would be incredible.

The tour began with a quick skin up to Austin Pass. We dropped and rode Swift Creek as far as we could to a flat meadow. There were no tracks beyond here and already we felt like we were heading on a proper adventure. With good weather and stability, it is so nice to branch out and explore new terrain. Sure, we could’ve lapped Herman or Table in good snow, but ski touring has always primarily been a method of exploring in the snowy months for me.

Jon and I shared trailbreaking duties down into Swift Creek. We were still mostly heading downhill, but had to skin since there was no track. At one river crossing, we had to head up river for a while before finding a snow bridge. The recent rain has taken a toll on low elevation snowpack.

As we approached Mt. Ann, we discussed our approach options. We chose to weave up through some steep, sparse trees and gain a broad ridge that we felt would be the safest line up.

I was breaking trail in boot top light powder, so it wasn’t as bad as it could have been. I set an efficient, low angle skin track through the trees and then wandering up the bumpy ridgetops. They were the proudest tracks I made all day.

Unfortunately, high clouds were moving in and it seemed like we were not going to get that bluebird day forecasted. The light was incredibly flat, and in an alpine zone like this, even seeing the terrain where I was skinning was difficult.

We reached the saddle between Annette Peak and Mt. Ann in about 2:40 from the car. This was surprisingly fast, especially considering we had to break trail for about 3 of the 5 mile approach. Mt. Ann definitely is not as far out there as people make it seem.

For our first run, we skied a mellow line through the upper bowl before dropping into steeper glades all the way to the bottom of the avalanche path. The snow and visibility got progressively better. By the bottom, the snow was silky and fast.

On the way, I passed another group coming up. They said thanks for breaking trail, and I asked them if the appreciated my efficient, low angle skin track. The promptly said “No” and proceeded to step out of my track and make their own, steep, inefficient track. I’m not sure what it is with the Baker Backcountry, but I find the worst, steepest skintracks of anywhere out here.

The bottom of the valley was filled with avalanche debris probably 10-20 feet deep. From here I set another agonizing track back up to our upper track. I was disappointed to discover that a few groups had all cut my steep kick turns, making them harder for the followers! Please, run your kick turns all the way through the tracks, and don’t cut early. Skin track sustainability is important.

When we reached the saddle the second time, visibility was improving slightly so we headed up towards Mt. Ann, stopping a few hundred feet before the summit because the surface was becoming very icy and windblown.

The sun was trying to break out, but we could also see some fog rolling in. We relaxed for a while, but eventually the weather started to encourage us to move on.

We descended into “Crysophere” on the north side of Mt. Ann. Even though we couldn’t see the terrain beneath our feet, we linked absolutely perfect turns through boot top light powder. These were the kind of turns that make you yell and scream in joy. There aren’t too many days where you have the combination of visibility, snow, and stability to ski stuff like this so freely.

It was so good that our tired legs found new found energy and we skinned up again briefly to take a more direct line down. The clouds were now racing above us. We were the first people out to Mt. Ann for the day, and now we were the only ones left.

We skied a more aggressive line to the skier’s right of the group fo trees. It was difficult to see the terrain and even after I cut a big slope, Jon triggered a shallow storm slab, nothing that could bury you, but still slightly concerning. This spot actually seemed to be shallower in fresh snow, but had a different bed surface. We postulated it was the bed surface of a previous avalanche, as there was debris in the runout, and this made a slicker surface to slide.

Because of how I purposefully had set the skintrack, we were able to follow it on a long downward traverse back to the low point in our skintrack near the creek crossing. From, there, we meandered our way back to Austin Pass and rode the groomers back to the car. Another fun day with Jon in the Baker Backcountry!