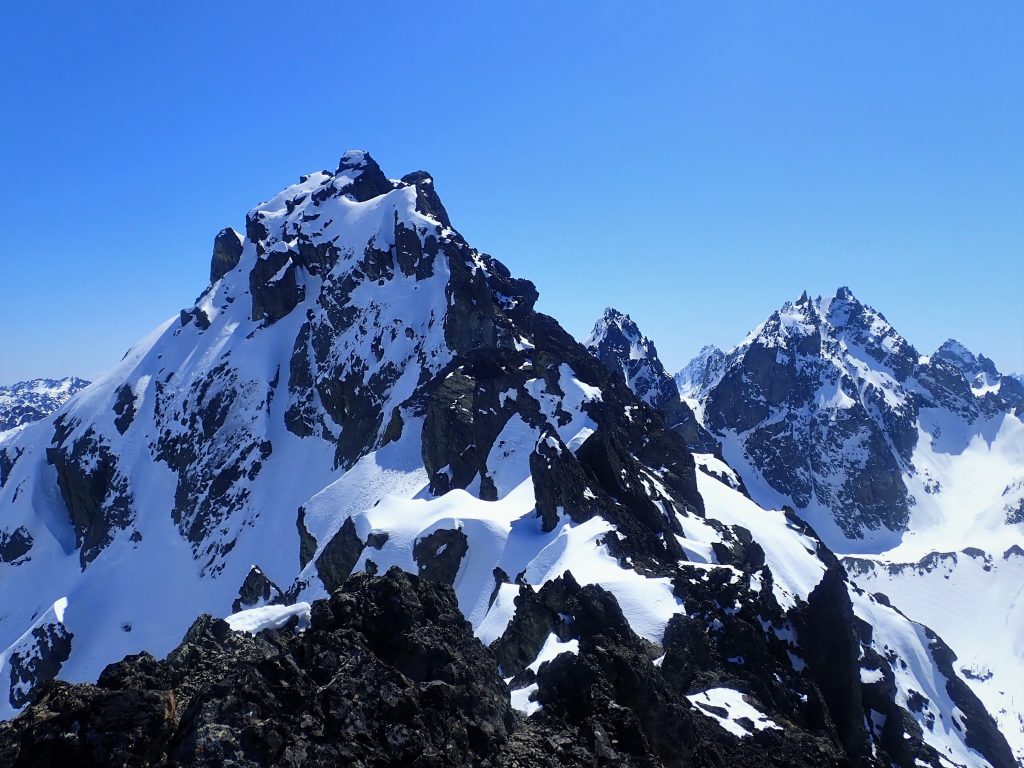 Return of the Skimo

A nice weather window – cold, clear, and stable – led me over to the Olympic Mountains once again. I had skied some awesome pow back around Christmas on B Peak with Porter, Lael, and Peter. I couldn’t help but notice the long broad ridge that extended southwards towards the Needles, the biggest group of 7000+ ft peaks in the Olympics. I made a mental note to come back some day. Now seemed like a better time than ever.

The south side of Tyler Peak had even less snow than late December and I was able to hike until reaching snow just a few hundred feet below the ridgeline – probably 5500 ft.

As I began skinning, I realized that I might have made a fatal flaw in bringing no sort of crampons or ski crampons. The snow was bullet proof after a week of warm temperatures and then a hard freeze. I eased my way over towards the false summit of Baldy.

I could now see the meat of the traverse across Grey Wolf Ridge to the Needles. It looked very far away – but at least the terrain looked pretty easy. I foresaw a lot of booting in my future.

I was excited for my first run of the day, but the south face of Baldy was quite melted out. This area in the Olympics is heavily rainshadowed and these south facing barren ridges were very melted and windswept. I had to descend a few hundred feet on rock before I could put skis on. Then I cursed myself, struggling to put skis on on a icy side-hill. I’m still learning this skimo thing.

After about 10 minutes of struggling to put on my skis, and one minute of actually skiing icy slide-for-life snow, I was back heading uphill. I put my skis on my back and started up the firm snow.

The booting was fortunately pretty easy and I quickly reached the high point of Grey Wolf Ridge.

After once again having to walk down the south side for a while to reach snow, I put on my skis and cruised a nice traverse on the east side of the ridge. There were even a few corn turns where the sun had softened the snow nicely.

Then it was back to booterville. I crossed onto the west side of the ridge and ascended directly up the bowl to the north of the south highpoint on Grey Wolf Ridge. I was starting to get tired of booting, since I don’t practice booting enough in the winter.

At the southern high point in the ridge, I had a good view of the Needles and the next part of my journey. It looked like I could either traverse way low around Walkinshaw or go just to the right of the summit. The high route looked more appealing.

I stayed pretty close to the spine of the ridge. After a short climb, I had to descend off skier’s right and then boot up to reach a break in the NW ridge of Walkinshaw around 7000 ft. It was here that I found the first signs of other people – some solo ski tracks from earlier in the week. I guess I’m not the only person crazy enough to ski in the Olympics.

I scrambled further up the ridge and got within about 100 ft of the summit of Walkinshaw before deciding to call it. From this vantage, the Needles were steep, craggy, and intimidating – unlike anything else in the Olympics.

I reversed course and ski traversed down the southwest aspect. Coverage was patchy, but once I got in the gut of some gullies, I found great corn and easily the best turns of the trip! Below, a long leftward traverse across avy debris got me down into the basin just north of Mt. Johnson.

I was feeling pretty worked at this point, as my exercise and motivation had generally been pretty low since quarantine started. But I was truly happy to feel the burn in my thighs and the sun on my back. It was relieving to be back in these wild places. Netflix just isn’t the same.

The moraine at the base of Johnson, deposited by two different dying glaciers, is quite impressive in size and steepness. It reminds me of the Colchuck Glacier Moraine. The north of Johnson itself had a mutli pitch ice route that looked to be in pretty good condition, but I doubt it has ever been climbed.

My legs were screaming on the final ascent to Surprise Pass. The north facing snow was extremely firm. Right near the end, the angle steepened and the snow became straight neve. I kicked in my ski boots with all my might, gripped my ax in dagger position, and cursed my decision to leave behind the crampons. It was a bit nerve wracking, but I moved quickly and reached the col safely.

The snow was wet and manky down to the little glacial pond. From there, I continued down into lower Royal Basin. Now I was familiar terrain. Nearly four years earlier, I climbed Deception and Mystery with Logan.

I made the mistake of descending to the left side of the basin. I struggled through tight trees, mini cliffs, and mushy breakable crust snow. Why do I do this ski mountaineering thing?

After an hour or so of struggling, crawling, and hopping, I made it out to a flat snow covered meadow and found an absolute packed-down snowshoe highway. This greatly improved my morale, because I knew I was on the trail.

I slapped on skins and began following the trail down. Coverage was decent, until the valley turned to be more south facing, and it wasn’t. Around 4600 ft, I entered a brutal section of avalanche chutes where there was deep snow coverage for a few hundred feet followed by bare ground. Rinse and repeat dozens of times. Grey Wolf Ridge above sheds some serious avalanches down to the bottom of this valley. I gave up on skiing and just booted.

Eventually, I got past all the avalanche paths and switched back to trail runners. The forest grew very still and cold. In the deep valley, the snow had melted and refrozen into this bizarre layer of water ice covering the entire forest floor. It obscured all signs of the trail and made every little incline slick. I’ve never seen anything quite like it.

The trail kept going on and on and I wondered if I’d make it back before dark. It’s funny how, after wanting to get out so badly for so long, now I just wanted to be back at the car. I passed the National Park sign, which meant I was close to the turn off!

The final 500 ft climb from the valley back towards the Maynard Burn Trail set my legs on fire once again. But pain is only temporary, and soon I arrived back at my car – alone – just as it had been in the morning when I started.

I was treated to another perfect Olympic sunset as I drove back towards home and hopped on the ferry. I had probably done more booting than skiing my first skimo day of the season, but it felt so relaxing to be back in the mountains, like things were normal again.