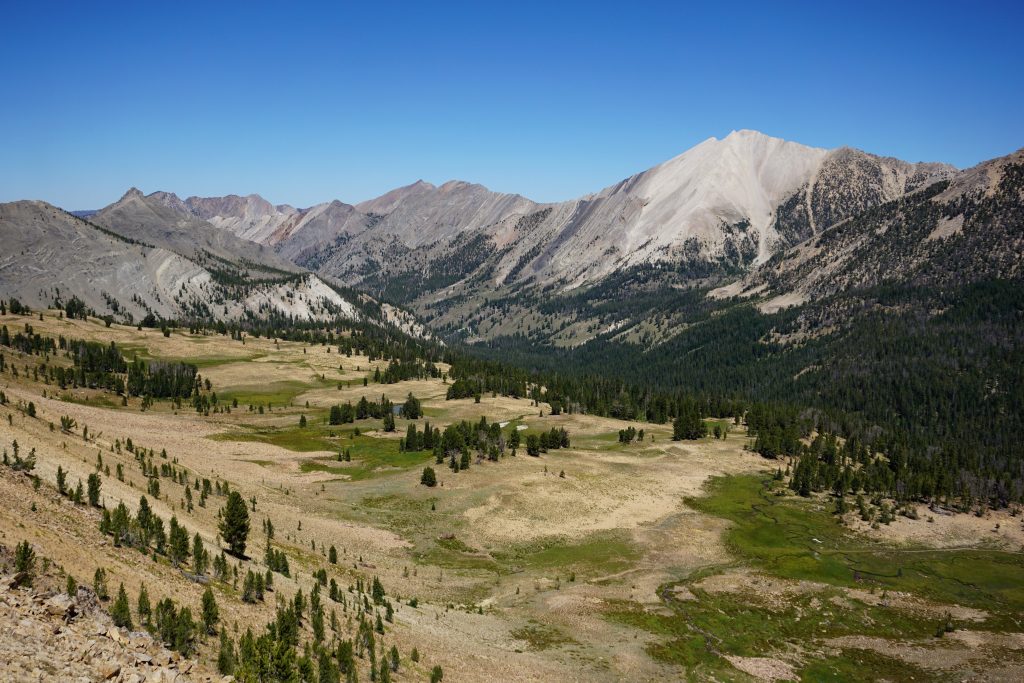 Back during my two month road trip in 2018, I spent my final week or so climbing and hiking in the Sawtooth and surrounding ranges near Stanley, Idaho. Somehow, I completely missed the White Clouds, a group of high peaks just east of town that are named for their white shale peaks. The contrast between blue lakes and white hillsides had me immediately sold, so I planned them into my 2020 road trip.

The White Clouds came at the end of the road trip, on the way home. The day before, Sam and I ran 41 miles on the Teton Crest Trail, so I knew I would not be able to manage a full day. Instead, I drew up a shortened loop around Patterson Peak that would give me a taste of the range.

We rolled up to the trailhead a little after noon. Sam opted to take a nap while I went out. I promised him I would be back in four hours. The afternoon heat was pretty brutal, but luckily minimal gain is required to get into the alpine from the Fourth of July Trailhead.

I crossed a pass to the north and got a great view of the northern White Clouds. One peak in particular, D. O. Lee Peak, stood out, completely whitewashed. Beyond it, there were many interesting veins of rock evident in the ridges. It was one of the most unique sights I have seen. Honestly, I was expecting the entire range to be the same shade as D. O. Lee, but it was still pretty cool.

I followed the trail down through Ants Basin towards the Born Lakes. I didn’t feel ridiculously tired from the day before, but my leg muscles definitely did not want to run. So I managed a shuffle.

The trail led me to the Born Lakes, which were nice with a few campers. They reminded me greatly of all the little lakes in the Sawtooth just across the valley. At the upper lake, I turned right and started climbing to a pass that would lead me into the Four Lakes Basin. I was surprised to find a pretty good climber’s path in the scree field and another party coming down. Turns out there is a great culture of off-trail backpacking in this range and many popular routes have little climber’s trails through the highest passes.

Once at the plateau, I got a view down to the Four Lakes Basin. There were alpine, barren, and rocky. The ridges all around were surprisingly rugged and granitic. It was the same orange grippy granite only found at Washington Pass and in the Sawtooth. In fact, most everything looked very reminiscent of the Sawtooth, just a little chossier and with randomly placed white shale peaks.

I was originally planning on descending to the Four Lakes and then climbing over a pass back to Fourth of July Lake, but the northeast ridge of Patterson was too tempting.

The ridge had a lot of interesting class 3 and 4 on just-solid-enough blocks. Naturally, there were about twice as many gendarmes as I expected. The steepest were definitely class 5 with intense exposure, so I skipped some of them.

After a few weeks of boulder hopping, high routing, and trail running, it felt to be good back in more vertical terrain. I love these sort of organic adventures, when I just follow my eye. This was not what I had envisioned, but it was what felt right in the moment.

I reached the summit at the exact same time as two dads and their pre-teen sons. They were stoked and took tons of shirtless photos. It reminded me of when I was that age.

The White Clouds are a pretty small range, but certainly rugged. And they are surrounded by so many other awesome ranges: the Sawtooth, the Lost River, and the Boulder Mountains. This is really an underrated part of the West.

I took a nice extended break up top. I knew that once I started down, I was effectively heading back to work. This was the final highpoint of Roadtrip 2020. Two weeks is just long enough to forget the flow of normal life and adjust to a “new normal”. But this is adult life, and it is ultimately my choice.

The west face of Patternson Peak was a complete garbage pile. There is no good way down or up on this side. People hate on the Cascadian Couloir, but this was the true poop chute, just much shorter. It took me a while to clear my socks and shoes at the bottom.

I found the trail around Fourth of July Lake, which had many day hikers. In another weird turn of events, my legs decided running was actually okay and I got down into the 8:30 range for the final few miles. As promised, I got back to the car just under 4 hours.

While I would have wished to devote a long day to the White Clouds, I feel like I still got a good taste of the scenery and terrain. It felt much more similar to the Sawtooth than I expected. I would love to come back someday and get out to the northern part of the range and just explore more.