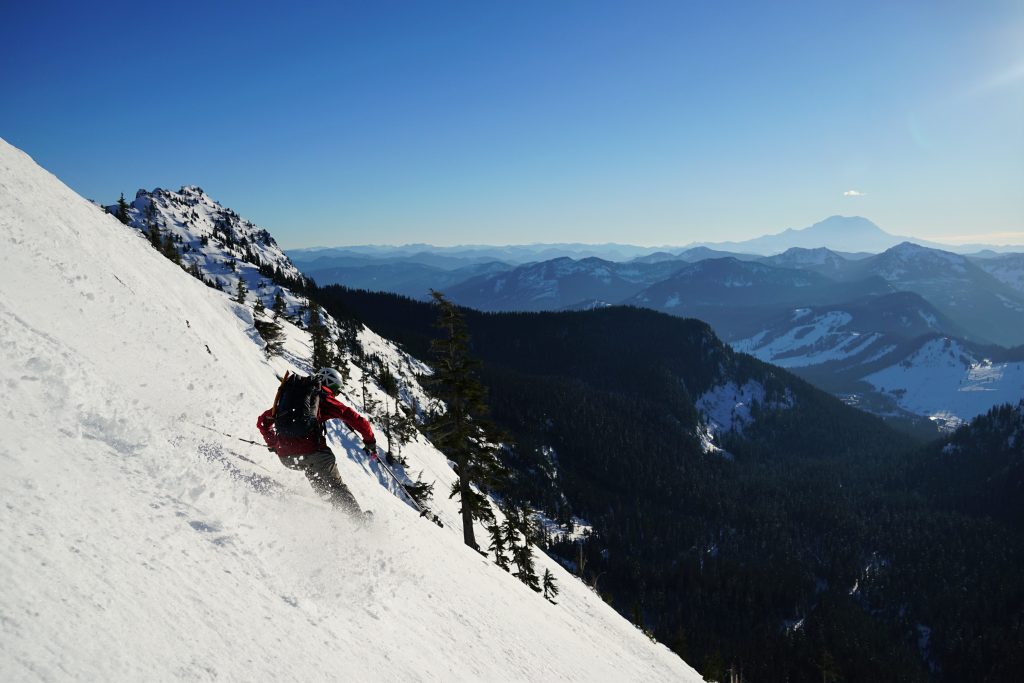 It may only be early December, but it feels like we’ve already had an entire ski season. We’ve skied deep powder, tackled some steep couloirs, thrashed through alder, and built a kicker. Enter a week of sun, wind, and temperature inversions, rotting the thin snowpack. Guess it’s ski mountaineering season!

Sam, Nick, and I headed up the Commonwealth drainage in the early morning with low expectations. Our plan was to check out the Lundin and Red area.

The Commonwealth approach was surprisingly filled in. The only crux was the log bridge to cross Commonwealth Creek. Nick and I insisted on keeping our skis on, making for some hilarious scooting and beach whale moves. Two snowshoers behind us watched in humor.

We continued up the valley towards Lundin. The snow was refrozen solid, necessitating ski crampons in a few spots. Eventually, we just started booting up the South Couloir of Lundin (Cocaine Couloir). It’s not much a couloir, more of a gully, but still a fun looking line.

The winds were absolutely howling at the top, ripping up the slopes from the south, and there was seemingly nowhere to hide. We couldn’t get into the North Couloir easily because a cornice had already formed. After a few minutes of looking around, I found a way to downclimb some 60 degree snow on rock slab (shovel very helpful for security) around the cornice and then began excavation from below. About 15 minutes of digging had broken through the 6 ft. tall cornice and allowed us to safely downclimb into the couloir. This extra little challenge made me very happy in a strange way, but I enjoy strange things.

The North Couloir seems to be infrequently skied. It’s pretty tight and winding initially, very Slot-esque, but the narrow section is only a few hundred feet long. The snow was chalky and windblown, definitely better than we had expected!

Nick is by far the best jump turner I’ve seen (makes sense considering his obsession with couloir skiing) and he has been able to give me some good pointers. Keep your weight forward, choke up on the poles.

We stopped at a bench around 5000 ft. and took a break, finally out of the wind. We gazed out to the Chimney Rock group and the high peaks of the Alpine Lakes Crest Traverse.

We booted back up the North Couloir and reentered the sun and wind atop Cocaine Couloir.

It was around noon, and the couloir had softened a bit in the sun, in spots at least. The walls of the couloir, which had slightly more eastern tilt, even skied like psuedo corn in a few spots! Let the spring – err late fall – corn harvest begin!

By the time we reached the bottom, we were in deep April-like mung. We still had plenty of time, so we decided to check out the West Face of Red, hoping it might soften in the afternoon sun.

We tried to stick a little too high on the traverse to Red, necessitating steep skinning and terrible booting to get through some cliff bands. If I did it again, I would descend to the valley floor before heading up to Red via the normal summer trail.

As we started up the West Face of Red, we were delighted to see a bootpack up the face! We soon passed the two snowshoers from the morning, on their way down. They had set the bootpack most of the way up and had even taken the care to set a separate downtrack, not ruining the up track! Now, these snowshoers are homies!

At this point in the season, none of us were prepared for all the booting we encountered. I’m pretty good at skinning steep slopes, so usually I go all winter with hardly ever putting the skis on my pack. Come spring, the booting destroys my legs. Maybe efforts like these, mini skimo missions, will help me get in better shape.

We kept the pace slow and easy, letting the steep west face soften as much as it could in the weak December sun. It felt like such a perfect climax to the day, ascending the white staircase into the sky, as the beauty of Snoqualminix revealed itself from the summit of Red. The glitter of cars at Summit West was strong, but we could not have felt further away from the bustle of Washington’s busiest pass.

We dropped off the top around 2:30. The skiing was a mix of grabby winboard, chunky crust, and psuedo corn. But the position and relentless steepness of the line easily made up for it. I don’t think I have skied any other faces in Snoqualmie that are so steep and sustained. Red definitely has a bigger mountain feel.

We continued down the summer trail all the way to the flats at 4000 ft., an incredible 1800 ft. descent. I think we skied almost every sort of snow – except for powder. From there, we managed to sneak all the way out without transitioning (although there was a lot of side stepping). The death luge of the “Commonwealth Fun House”, as Nick likes to call it, was really not that bad.

This day had all the elements of a classic ski mountaineering day in April or May: variable snow, lots of booting, steep skiing, and even digging through a cornice. Sure, skiing powder is great, but days like these remind me how it feels to be wild and free. They ignite the flame inside of me that sustains the biggest and deepest adventures of the year. There will be the day when we are ready to take our talents to the Giants of the North Cascades, but for now, Snoqualminix is our training ground, crowded yet empty, familiar yet still so mysterious, and always a pleasure.