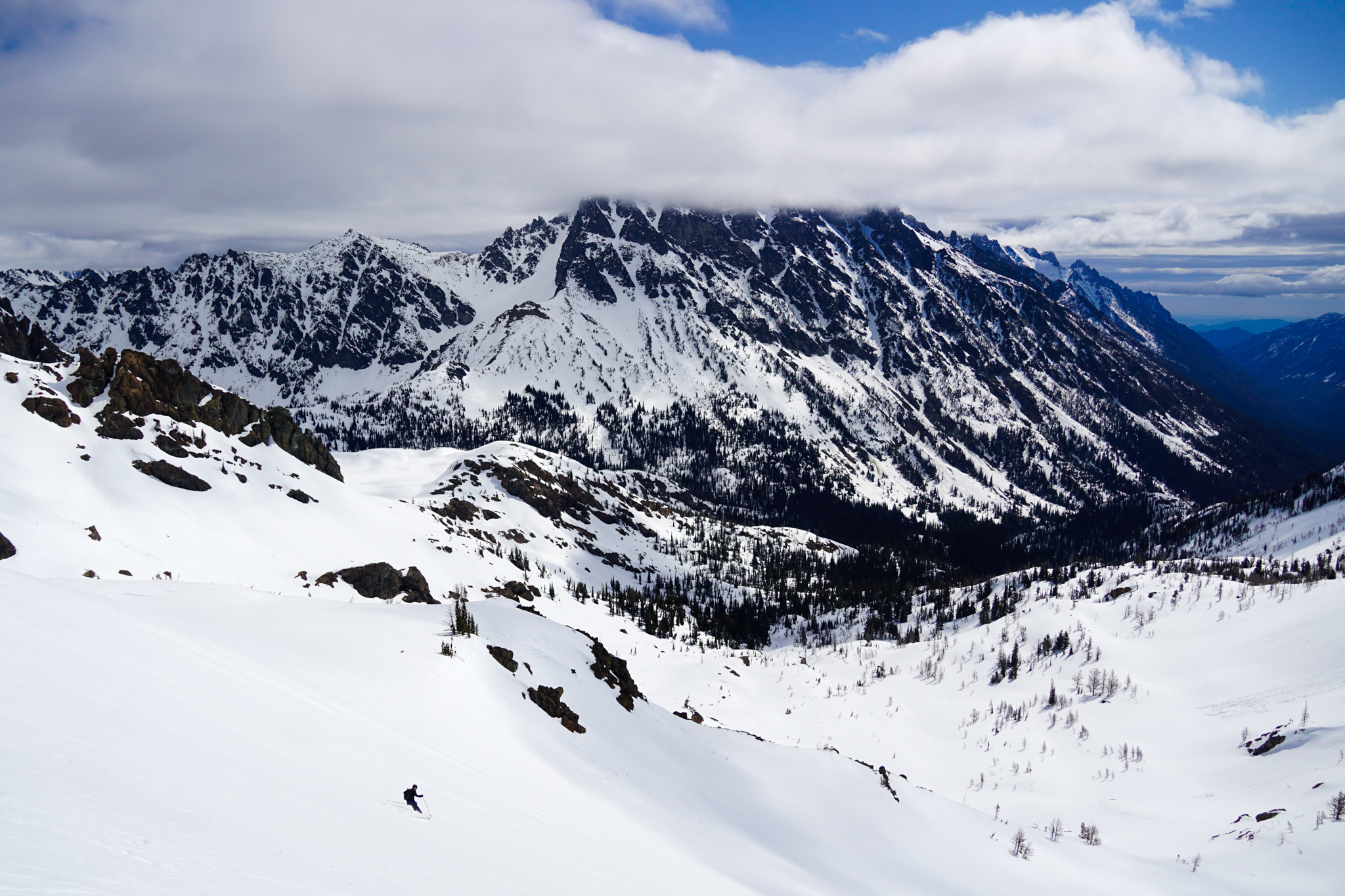 After getting back from the Methow, I had one free day before gearing up for Smith Rock. My housemate John also was unemployed, so we figured we might as well try to go ski something. He had just finished a single push to the summit of Rainier and the forecast was once again marginal, so we decided to keep it chill and head out to the Teanaway for some corn farming. Why not? What better did we have to do? It was nice finally to feel like I did not have other obligations and excuses to not ski.

Fortune Peak is a high, pyramidal peak near Ingalls and Stuart that is visible from I90, begging to be skied. It has moderate slopes on all aspects and we figured it would be a good place to go.

It was cloudy and drizzly as we drove over from the west side. We were able to drive to within a third of a mile of the Esmerelda Trailhead. After one short carry, we were skinning continuously up towards Fortune. Unfortunately, the heat from the day before and cloudy night prevented a refreeze and the snow was already mushy down in the forest. Our hopes of good skiing seemed far fetched. But at least it was cool to get a view of Esmerelda and the steep wall where Michael, Kurt, and I had a great adventure mixed climbing last fall.

As we got to about 6400 ft on the south face of Fortune, the snow suddenly changed to a firm crust necessitating ski crampons. Maybe corn would be in our future after all! The clouds also started to break and John reveled in the views. He is relatively new to Washington and had never been in the Teanaway or near Stuart. “This is so much more beautiful than Rainier!” he exclaimed, and I agreed. I am definitely not a volcano boy.

At the summit of Fortune, I found similar weather to the last time I was here, seven months ago, on the Teanaway Thru-Run. It looked cold and cloudy to the west, while the clouds broke up over us and enshrouded the upper reaches of Stuart.

Around 10 am, we dropped into the east bowl of Fortune to find pretty good corn! The surface was not the smoothest with lingering wind features beneath, but the skiing was still solid.

The resemblance to a prior experience was uncanny.

Down in the basin, we transitioned amongst the larches and skinned back up. Now the south face seemed ripe and ready to rip!

The south face offers 2000 ft of wonderful gladed corn skiing, although we only skied the upper 1000 ft because there had been no refreeze below 6400 ft. John said it was the best corn snow he had ever skied! It was so good we lapped it twice.

The snow, even up high, had deteriorated slightly on our second run, so we decided it was time to go, even though it was not even noon. Below 6400 ft, we encountered some terribly grabby snow, but snuck through the forest and all the way back without any serious crashes or injuries. Spring survival skiing for the win!

This was yet another relaxing day of spring skiing, setting out with no real objectives, and just having fun. Fortune Peak is a great place to farm corn in the spring, with big bowls and moderates slopes on all aspects!