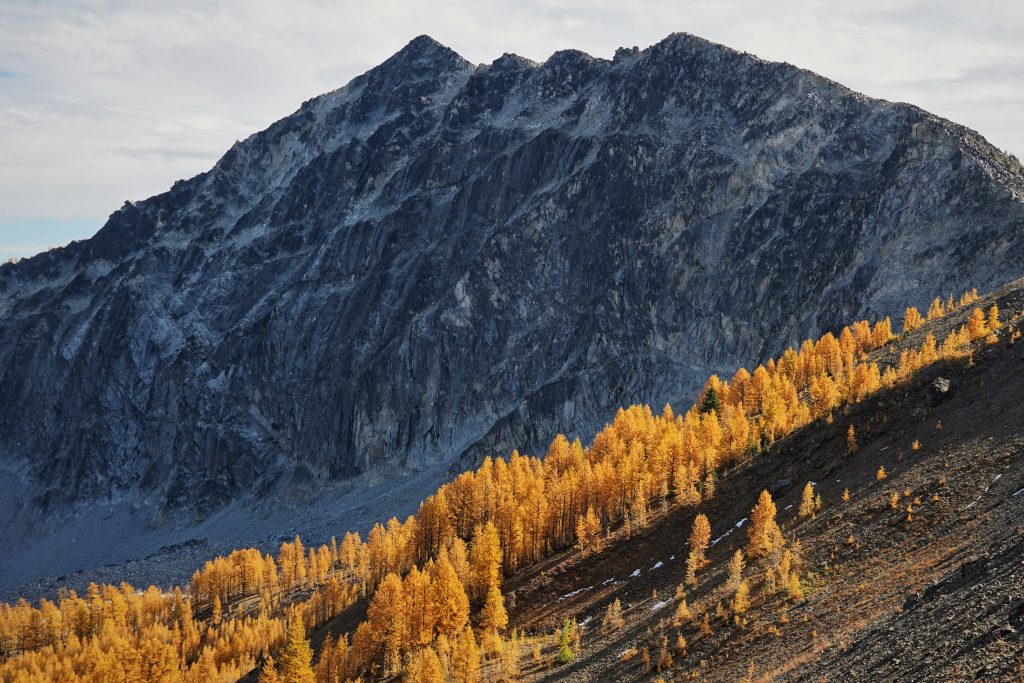 My birthday is conveniently during the peak of Larch Madness and fall colors in the Cascades. Naturally, I have a history of visiting the Chelan Sawtooth Wilderness for my birthday (Hoodoo and Raven Ridge in 2017). This year, we have been granted with a remarkable 2 weeks of high pressure for all the larch peeping we could desire. After an awesome, but tiring, 30 mile run from Harts to Rainy Pass the day before, I drove down into the Methow Valley to meet Steve, Cherlyn, and Colie.

Our plan was to use a short car shuttle to hike a horseshoe loop over Courtney Peak, starting at the West Fork Buttermilk Trail and ending at Eagle/Oval Creek.

Chelan Sawtooth approaches can look a little long and mundane on a map, but I always find they go by quickly. The smell of the eastside forest, different flora, and persistent sunshine are enough of a change of pace that the trail passes easily.

Soon enough, we were entering the larches near Fish Creek Pass. Cherlyn, Steve, and I all had real cameras (Cherlyn had a huge fancy new one) and we started taking dozens of pictures. Colie took a few with her iPhone but mostly looked on, feeling left out.

There were a few parties at Fish Creek Pass, but overall, the Chelan Sawtooth is minimally crowded, despite the great trail system and beautiful eastside views. I guess it’s just too far for a day trip from Seattle, but also it still flies under the radar. Cherlyn and Colie had never visited the range and had barely even heard of it before. Steve had only visited for the first time a few months ago.

The Chelan Sawtooth has such dramatic contrasts that make it perfect for fall scenery. The gentle rolling sagebrush hills in the Methow Valley remind me of the basin-and-range like parts of the Rockies. The sharp, dark granite faces are complemented by endless fields of gold larches at their bases.

The meadows around Star Lake looked so enticing that we had to make a detour down the other side of the pass. We wandered through larch glades of all sizes, quiet and calm in the morning light.

Cherlyn loves larches more than anything and she was in absolute heaven here. I don’t think she had ever seen so many yellow trees in her life! We jokingly called the range the “Cherlyn-Sawtooth”.

Slowly, we made our way back to the pass and then northwards on the ridge to Courtney Peak.

The view from Courtney of the North Ridge of Star is so classic. The North Ridge (supposedly 5.7) looks like an awesome adventure climb. Back during quarantine, I read through basically the entire Chelan Sawtooth section of the Beckey Guide and found a boatload of moderate alpine rock routes in the range, many of them put up by the Spokane great Rick La Belle. I’ve always been impressed by the amount of granite out here, so it is not too surprising.

There’s a use trail most of the way up Courtney, before it turns into large class 2 boulders a few hundred feet from the top.

The summit was cool and windy, a great contrast from the day before. While Courtney Peak itself is nothing special, it is always refreshing to look at the Cascades from a different angle. The bulk of the Glacier Peak Wilderness beckoned from across Lake Chelan. Even some of the North Cascade giants were visible.

Bugaboo really didn’t like the large boulders, which would damage his paws, so master Steve had to carry him for a good ways across Courtney Peak. Bug was also resistant to this, squirming in his arms. I was pretty impressed with Steve’s ability to boulder hop while carrying a 50lb moving object in his arms. I guess it is a good lesson in what is dog friendly terrain and, more significantly, what is not.

Finally, we got off the boulders and onto sand. Down at the Courtney-Gray saddle, we paused for a while, watching the clouds race overhead and shadows dance on the beautiful larch filled basin of the Oval Lakes. After such fast paced adventures, it felt so peaceful to just sit and wait, appreciating every line and every tree.

After enough whining from Bug, we reluctantly continued on to West Oval Lake.

West Oval Lake was decent, but the high clouds made it hard to get good photos.

We had a nice hike out down the long valley to Eagle Creek. The trail is a very constant, easy grade, so the others chose to jog but my leg muscles simply refused to run after the beating the last few days. So I had a quiet end to the hike, not seeing another soul the whole way out, through beautiful burn and reviving forest. It always feels so lonely out here, like you’re stuck in time, but in a good way.

When I got back to my car, I discovered one tire had gone completely flat! I was able to put on my spare, but this was only the beginning of my flat tire problems on this trip…

This was a really pleasant day, low key and beautiful. The Chelan Sawtooth is special to me, just like each part of the Cascades impart in me different sensations and emotions. Thank you to Colie, Cherlyn, and Steve for an awesome birthday.