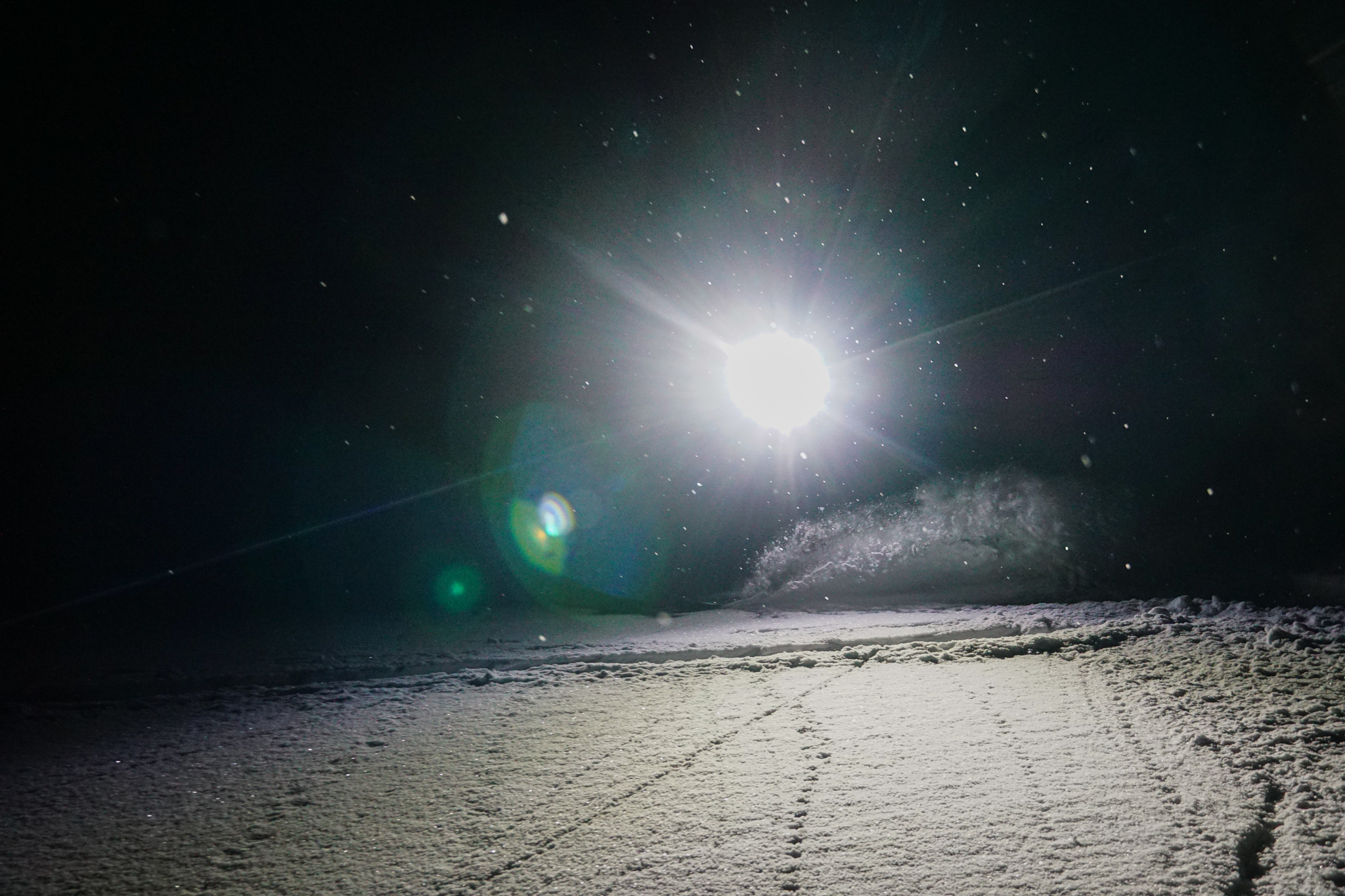 I was sitting at my desk working when I got a buzz from Anthony:

“I set the Skinner up and out of the slot. It’s the best I’ve ever skied it.”

Like any rational person, I immediately made plans to stop work a bit early and get my butt up to the pass as fast as possible. Anthony has skied the slot probably hundreds of times (no exaggeration). So if he is saying it is all-time, that means a lot. I texted Peter, Tanya, Sierra, and Curtis and we all made plans to rush towards the promised land and join the Duke of Snoqualminix.

Snow levels are extremely low right now and I enjoyed another beautiful afternoon drive through the Issaquah Alps and North Bend. For the second straight day (I went night skiing with my dad the day before), the sun was shining, the trees were coated in white, and Snoqualmie was at its most beautiful.

I met Sierra and Curtis at Alpental and we started skinning up the Phantom. Peter and Tanya had already started up, meeting Anthony for more laps. Anthony was gonna lap the Slot until he fell ill or had to go back to work.

The Phantom skin track was as steep as ever, giving Sierra and Curtis, two newer backcountry skiers, some difficulty. But I was content to gaze out at the cotton candy clouds and soft light. There were faint clouds above us, the kind where it is hard to tell where the clouds end and the sky begins. Light snowflakes fell slowly, like a snow machine in the sky. Once a season, Snoqualmie goes completely blower like this. And when it does, there is no place I would rather be.

We reached the top of the Phantom Trees right at sunset. Anthony, Tanya, and Peter were just booting out of Thunder Creek so we all converged and watched orange and pink clouds light up behind The Tooth.

It had been a long time since I had seen Tanya, and she was so happy to be out and skiing wonderful snow with her husband. Everyone knew each other, as we were all united by a common love for this place and this sport. Sierra and Curtis decided they would head down with Anthony and Tanya, who had dinner plans, while Peter was down for more laps with me. I loved our hodge-podge group, our improvisatory plans, our commitment to live in the moment. At this moment, only one word came to mind: “community”. Sometimes we do not know how to find community, but if we stay true to our passions, I believe we will always find a community, one way or another.

Peter and I switched on our headlamps and continued upwards towards the Slot, using the nice skin track Anthony put in and had been recycling. As darkness settled over the pass, the ski area lit the underside of the clouds. The pass was glowing.

I had not seen Peter since we last ran the Grand Loop together over the summer. We talked about his booming ski business (we were both skiing some ultralight pow sticks he made) and how he could take it to the next level. We talked about skimo and biathalon racing. We complained about how dating apps are purposefully designed to crush the confidence of men. Just two 24 year old boys talking about normal stuff. It was nice to be reunited.

At the top of the Slot, we said goodbye to the lights of the pass and dropped into the dark halls of the famous Snoqualmie couloir. I had skied the Slot once before in terrible spring conditions. It was actually the first time I met Anthony. So it was fitting that I was here again upon his doing.

Anthony was not lying; the conditions were all-time. Deep, stable powder from the sustained cold temperatures. Around us, the air held perfectly still, just silent flakes falling from the sky. It reminded me of the last line of Dubliners by James Joyce (my 11th grade English teacher would be proud):

His soul swooned slowly as he heard the snow falling faintly through the universe and faintly falling, like the descent of their last end, upon all the living and the dead.

The darkness has a way of shrinking our world to the things that immediately impact us – the way your breath crystallizes into smoke in the cold air, the way the snow feels as your skis slice beneath you, the halls of rock guiding you down the mountain. Everything becomes so small, so calm, so peaceful. In this world, everything is perfect.

At the bottom of the run, we skinned up towards the Thunder Creek Exit. In addition to three laps on the Slot, Anthony had also done one lap in the Snot Couloir, so we branched off and followed his skin track up. A million kick turns and some booting later, we reached nearly the top of the couloir and decided to head down from there. The snow was even better here than in the Slot – less tracked and so, so soft.

As we crested the Thunder Creek Exit, the light from the pass hit us once again and we started down through the Phantom Trees. Even here, three days after fresh snowfall, the snow was still light and playful. We rolled into Alpental just as the lifts were closing for the evening. One evening I enjoyed the lifts on one side of the valley and the next I slid through creamy pow on the other. What a wonderful place this is – Snoqualminix.