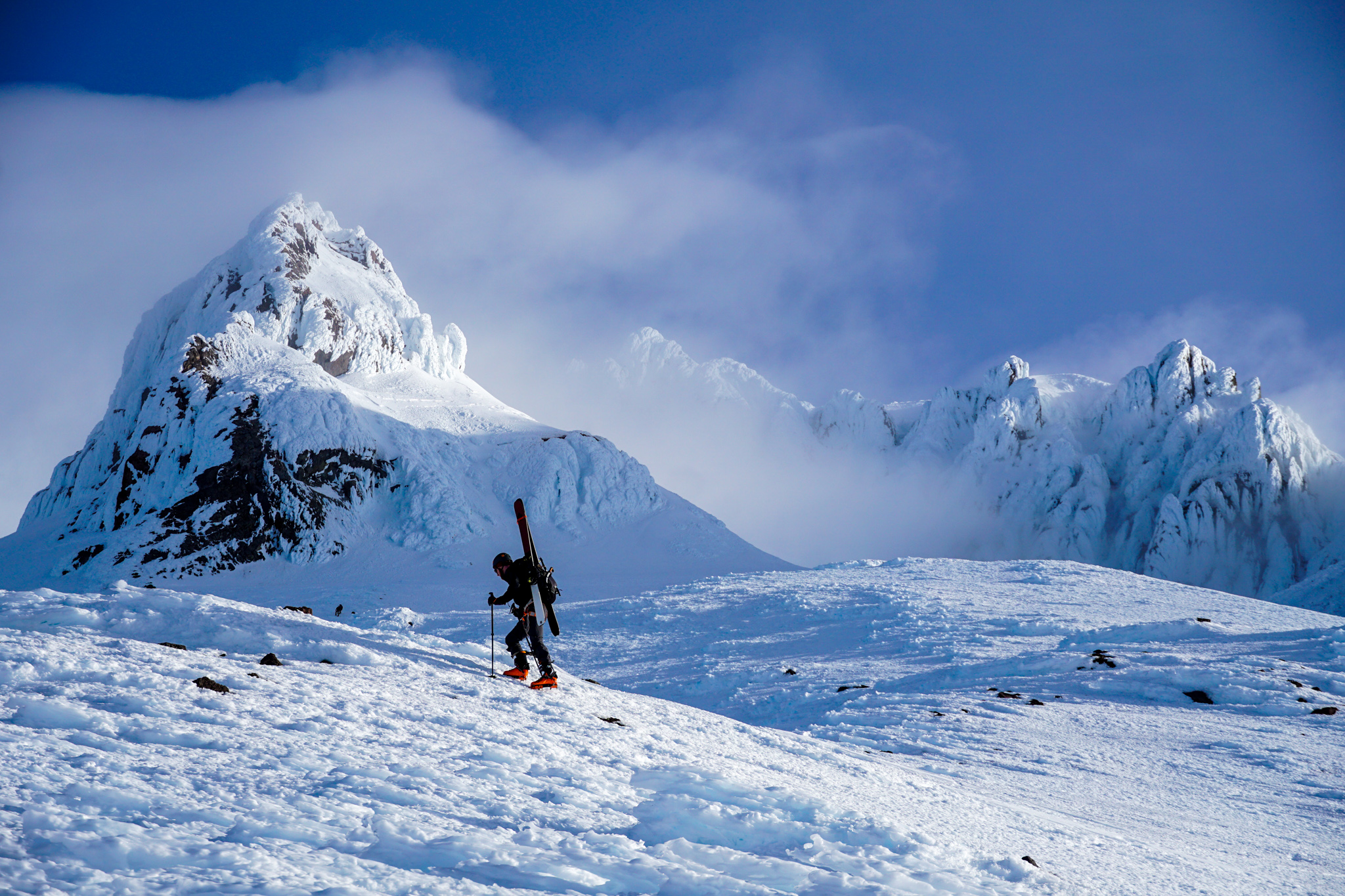 During the first full week of April, Daniel and Mills invited me to stay with them for a week near Smith Rock. When I mapped out the drive, I noticed the fastest route conveniently passed right by Mt. Hood. So I called up Jacob and made plans to meet him for a quick morning climb along the way.

Jacob and I climbed frequently together in college but have been generally separated since while he pursues his PHD at Oregon State. He is a an experienced Hoodwinker, with over a dozen ascents over the last two years. I had ran the Timberline Trail around Hood and done some laps at Timberline, but never attempted a summit of this popular mountain.

We woke up at Timberline to surprisingly clear skies. The weather was forecasted to be cloudy and windy, so we decided on just climbing the standard route hopefully before things went downhill.

Half of the climb up Hood is simply skinning the cat track next to the Palmer lift. The snow is kind of a mess of ice chunks, boot tracks, and semi-groomed cuts, so skinning straight up the incline is sadly the most efficient method of uphill progress. My weak hip flexors complained. They missed the low angle, manicured skin tracks of Crystal.

It feels so bizarre to be next to a developed ski area while climbing a “big” mountain. The south side of Hood definitely lacks any wilderness feel, but the access is pretty incredible. There is a reason Hood is the mecca of moderate alpine climbing in the PNW.

Above the Palmer, we switched to booting. Lenticular clouds began to swirl and a strong westerly wind slammed us. Were we going to get the summit?

As we entered the crater, we lost all visibility. The smell of rotten eggs permeated the air. The culprit was obvious.

We left our skis at the base of the Hogsback and continued upwards with crampons and light tools. Normally, Hood would be like Disneyland on an April weekend, but the poor weather kept the mountain relatively uncrowded. As we climbed towards the gates, it was like we were the only ones out there.

The blowing wind and rime gave the mountain a more mysterious feel. Jacob pointed out the Pearly Gates and we decided to go up the left “gate”. We climbed into the icy runnel. It was actually white ice, about 40 degrees, with nice steps kicked in – probably the easiest “ice” Jacob and I have ever climbed together, just pure swing-and-step fun.

We stopped for only a moment at the summit to enjoy the lack of views and bitterly cold wind before starting down again. Back at the Hogsback, out of the wind, we transitioned back to skis and lounged in the literal white room – the inside of a ping pong ball. Few people have been through more stressful moments with me than Jacob. It almost felt weird to be doing something so casual together, but it also felt damn nice.

We dropped below the clouds at the Crater Rim and began a fruitless search for good acceptable snow. We traversed all the way to Illumination Rock and then back across to the White River side, but only found endless icy chicken heads. It was possibly the worst skiing I have ever done, literal slide-for-life conditions! Jacob informed me that this is quite normal for the south side of Hood. I guess Hood is a climber’s mountain, not a skier’s mountain.

We finally found sun softened snow in the little canyon leading to the parking lot. As a frequent Hood skier, Jacob has remarkably low standards for ski quality and was thoroughly impressed. It was not quite Crystal blower, but at least it was playful and fun.

We reached the car around lunch just as the clouds were engulfing the entire mountain for good. I may have gotten no summit views or quality turns, but I could not have cared less. What’s the saying – “position over condition?” I would argue that a more true variation is “friends over conditions”. It was just wonderful to get back in the mountains with Jacob, in a venue that is familiar to him and new to me.