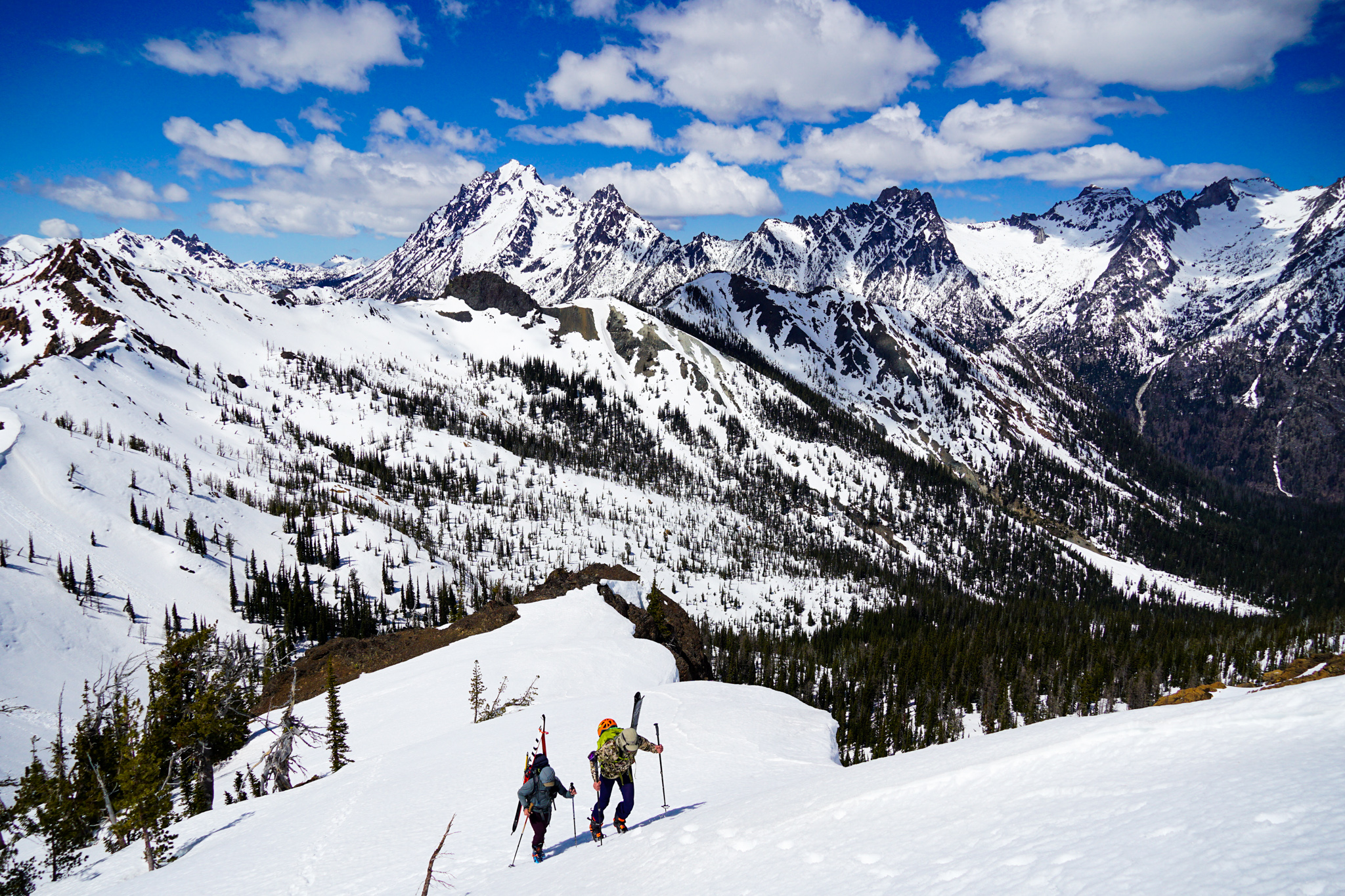 Last fall, I suffered an overuse injury of my quad tendon (knees) from running too much in the mountains without adequate recovery. I did PT and took a lot of time off. Luckily, skiing was easier on my knees and pretty soon I was running moderate distances during the week. Unfortunately, April brought spring activities, which meant more hiking and trail running. My injury flared up again and forced me to take some time off.

At this point, it seems highly unlikely that my knees will be able to withstand the usual load I incur during the summer. It is disappointing because I stuck to my exercises and progressive loading for 6 months since the injury, but still a relatively small amount of stress re-triggered the injury. But I have also taken it as an opportunity to switch my focus to rock climbing, which will figure more prominently into my plans this summer.

With a beautiful eastside weekend forecast, Jon and I made plans for a multi sport weekend: biking (for Jon) in Peshastin, rock climbing in Leavenworth, and skiing in the Teanaway.

On Saturday, we met up with Karly and Kylie and climbed at Castle Rock. I had not seen both of them since before the pandemic started. I had not done really anything with Kylie in over two years, but she was visiting from SoCal so we wanted to get back to the things we loved doing most together. In the morning, we climbed the classic multi pitch “Canary” together. Four years ago, I took a lead fall on this and Kylie could not even free the crux on the first pitch. We have come so far as climbers since then. This time, it felt totally casual and type 1 fun. It is nice to return to these earlier test pieces and remind myself that some progress has been made, even though it often does not feel like it.

In the afternoon, Jon and I pulled hard on Damnation Crack, Angel, MF Overhang, and Dan’s Dreadful Direct while Kylie and Karly swapped leads on Midway. It was a beautiful day in Tumwater Canyon – green, lush, and vibrant with blooming Balsamroots. It felt like a blast from the past – climbing with some of my best friends from college (go Zags!) at a place where Kylie and I did our earliest multipitch trad climbs. And for the first time since the summer of 2018, I felt the stoke for rock climbing and confidence on lead returning. As I stepped off the edge, making the “Scary Canary” move, Jon yelled, “Climber Kyle is back!” He was correct, in more ways than one.

On Sunday, Jon and I met up with Steve and Jim. Jim is the father of Kanyon, another college friend. Technically, Jim is the first backcountry skier I have ever gone out with, when we did Mt. McCausland with Kanyon and Connor over 5 years ago. Us three boys were on snowshoes, while Jim was struggling to follow our snowshoe track through tight trees during his first ever tour. At that point, I did not even know what tech bindings were.

There were a few deep snow patches lingering on the otherwise dry road a mile before the Beverly Turnoff. There was a Subaru, similar to mine, stuck in the foot of mush. Steve excitedly pulled out the electric winch on the front of his lifted truck and winched them out. Further up the Beverly road, there was a downed tree and Steve got to break out his new chainsaw to clear the blowdown. It was the best morning in a long time for Steve!

We parked about 0.7 miles from the Beverly trailhead, stopped by some substantial snow patches. The road was mostly dry from here, but consistent snow began just after the trailhead.

The Teanaway is very far east, so the snowpack is shallow and melts out relatively early. The sun is so strong that south faces were dry up to 5k or 6k in places, but shaded aspects held a little snow. Aspect is so key when planning routes out here. We took a right turn up Bean Creek and found a perfect patch of snow next to the creek about 10 feet wide. The other side of the river, the sunny side, was completely bare. Perfect!

Further up the creek, we crossed a massive debris pile from a giant avalanche that ripped off the south face of Judis Peak sometime this winter. This is consistent with what we found in the neighboring Stuart Range: every south face had slid big on the persistent weak layer at some point, ripping out mature old growth threes. We looked up directly to the summit of Judis and figured this would make for a direct ascent path.

There were some flowing waterfalls that we had to climb around, but otherwise it was very easy. We gained the gentle south ridge of Judis and had our first distant views of the Southern Cascades.

We stowed the skis on our back and booted up the beautiful south ridge of Judis. Steve was getting flashbacks to our epic day last summer linking 9 peaks together as part of the Teanaway Traverse. The Teanaway is truly the playground of the Cascades – fair weather, easy terrain, great access, beautiful views. For everything from spring skiing, to summer ridge running, to fall larch hiking, this place is so fun and so easy.

We had no hard plans for the day, other than to have fun and ski whatever looked good. The loose plan was to work the sun: east facing lines, then south, then west. The west chutes of Earl Peak looked fantastic.

Our first run of the day was off the east face of Judis Peak in perfect morning corn. Jon recently finally bought a lighter ski touring setup. “Skimo Jon” is now speedy on the up track but still retains some of his freeride flair.

We took the run down into the valley of Bean Creek, where we drank from beautiful open little streams in the hot morning sun. Then we headed up to the ridgeline between Marys and Bean for a lovely, steeper south facing line. No photos will be shown, because it was a BN. If you know, you know. 5000 GNAR points each! Bucket list item checked off!

For our third and final act of the day, we began the long climb up Earl Peak. We skinned up to a notch on the NW Ridge and then booted from there.

Afternoon convective clouds blew over the Eastern Cascades, bringing a three dimensionality the the landscapes. Shadows constantly shifted over the Stuart Range, which felt close enough to tap with our poles.

We took a nice break on the summit ridge of Earl.

A cloud hung over Earl for a good 15 minutes or so and by the time we started descending the west face, the snow had actually refrozen ever so slightly. The skiing was still fantastic, the best snow and best run of the day.

The central chute (just skier’s right of the true summit) provided an excellent 2000 ft of fall line skiing. From there, we continued down Bean Creek, following the summer trail. We were able to keep skis mostly on all the way to the trailhead! I was elated when we reached the cars and I still had no knee pain! So hopefully I can start returning to running and hiking over the next few weeks.

Spring ski season usually means bigger days, but my knee condition has forced me to reevaluate my plans. In reality, by “dialing it back”, I had so much more fun than I ever could have imagined this weekend. In a way, it is liberating to pass on bigger objectives and instead chose a relaxing weekend with friends, because it rejects the desperate temptation to always go bigger. And what could be better than this? Sunshine, friends, and laughter. Sending and shredding. Multi sport madness, done right, done well.