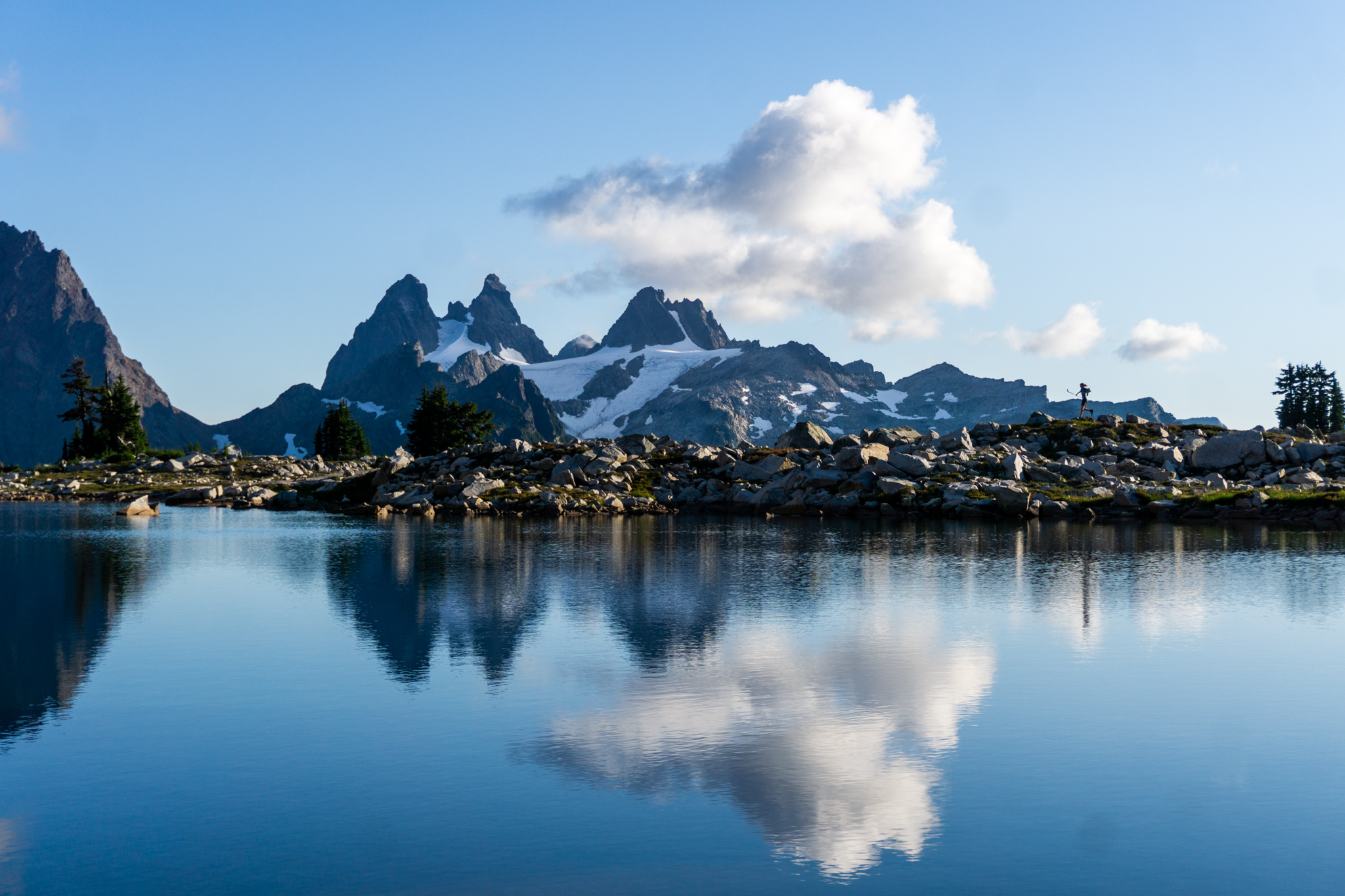 The Magic of the Middle Fork

One might find it ironic that after years of high routing in the Cascades, I still had yet to do the Alpine Lakes High Route, perhaps the most famous high route in Washington. There are multiple variations of the Alpine Lakes High Route, but most people consider it to be synonymous with the Necklace Valley Loop, starting and ending with the West Fork and East Fork Foss Trails. Part of the reason I had not done the route is because the actual off-trail section is just a few miles – quite underwhelming for such a classic “high route”. So instead, I envisioned an extended Alpine Lakes High Route from the south side, the Middle Fork Snoqualmie, and traveling the beautiful terrain from Big Snow to Iron Cap all the way to Tank Lakes. It would essentially double the length of off trail travel.

With a cool, sunny midweek forecast, I assembled a varied crew for the high route: John, an off trail beast who has been doing incredible routes down in California and an old friend of my buddy Nick; Adam, a Wasatch speed demon who was in town for our friend Anthony’s wedding; and Blake, my old bestie from high school, now a lightning quick ultra marathoner. I had to scramble to find bikes for Blake and Adam, but it all came together just in time (thanks Bryan and Porter).

Adam was renting a Tacoma during his visit, so we took his truck up the notoriously rough Middle Fork road to the Dingford Trailhead. The 5-6 miles from the Middle Fork Trailhead to Dingford were very slow with some large sections of river rocks and substantial washouts. From Dingford, we pulled out our bikes and began the 7 mile bike ride to the Hardscrabble Lakes trail. It was a brisk morning and we slowly churned our way uphill over big rocks until eventually reaching the Hardscrabble Trail, which is not really marked, but easy to find.

Technically, it was the first day of meteorological fall and it certainly felt like it. The air was cold and the brush was very wet from a few days of rain. The Hardscrabble Trail is not hard to follow but we got absolutely soaked and cold. Classic fall in the Cascades!

Even at the low elevation of 4000 ft, there were still large snow patches at the lake and evidence of large avalanches from the winter. We scrambled around the lake and entered the warm sun, ascending in a NNW direction from the lower Hardscrabble Lake, following the obvious gully system. It was absolutely beautiful, with waterfalls coursing down granite slabs, towering walls, and sparkling rock. Above us rose the beautiful east buttress of Big Snow, home to a relatively obscure 5.7 trad route. We jokingly called the setting the “Yosemite of the Middle Fork”.

Eventually the gully split and we trended right. The terrain up above looked very slabby and brushy and the proper path upwards was not obvious. This was a key part of the route and likely the hardest terrain we would encounter. We ended up finding a way through on the right with some class 3/4, skirting the upper cliffs to the left all the way to the ridge line. It goes!

Up on the ridge, we found very easy granite travel to the true summit of Big Snow.

The summit of Big Snow has a commanding position in the western Alpine Lakes Wilderness, with clear views all the way to Shuksan. The dramatic peaks of the Lemahs, Overcoat, and Chimney Rock from the Alpine Lakes Crest Traverse had a fresh dusting of snow and we even found some pockets of freshies on Big Snow!

It had taken us 3 hours on foot to get to the summit of Big Snow and now we began the long high route traverse. The northeast side of Big Snow features some incredible granite slabs – low angle, vast, and lofty. It was a true pleasure to jog down the slabs, with mesmerizing views of crystal blue lakes and green forests all around. Pure Alpine Lakes Wilderness.

We passed a tarn that was aqua blue and so beautiful. This is a really incredible landscape, reminding me of the Hinman Tarns and other post glacial slabs in the ALW.

We meandered down towards Gold Lake as granite slabs gave way to heather and ripe blueberry bushes. There was a surprising amount of springs slithering through the greenscape.

Gold Lake is a supreme Alpine Lake and has excellent island bagging opportunities for a warmer day. But we had miles to go so we continued climbing up the other side towards the shoulder of Wild Goat Peak. We debated a high traverse across the north slopes of Wild Goat but instead decided to drop low across a boulder field, then climb back up to a saddle just above Chetwoot Lake.

We were a little tired of boulders, so we rolled the dice and attempted to traverse the shoreline along the north side of Chetwoot Lake. It went well until we ran into a very brushy shoreline and there was a bit of schwacking to finally enter nice meadows. At this point, we were about halfway through our extended high route, and now finally joining the popular Alpine Lakes High Route or Necklace Valley Loop.

On our climb up Iron Cap, we encountered the first people all day. Convective clouds bubbled in the afternoon sun, adding a three dimensionality to the clear, clear blue sky. All around, we gazed out to a fairytale of green, blue, and gray – the colors of the flag of the Alpine Lakes Wilderness. I love how the sun stays low in the sky at this time of year, creating this perpetual soft light. We all felt in the groove on this climb.

We traversed the ridge to the true summit of Iron Cap, high above the defunct Iron Cap Glacier and the turquoise glacial recession lake. There was a bit of exposure, but it was always easy scrambling. The position here was really sweet, high above the Middle Fork and Foss Lakes, with Overcoat and Chimney towering across the valley.

We took a short break at the summit of Iron Cap. Big Snow looked a long ways away. Theoretically, one could take this high divide all the way from Big Snow to Mt. Daniel, then possibly along the Paddy Go Easy High Route into the Teanaway Traverse or a Stuart Range Traverse, for a true grand Alpine Lakes Wilderness crossing. I do not think there is another region of Washington that is so amendable to scenic, simple high route travel as the Alpine Lakes Wilderness. This is a region that I have come to appreciate more and more.

We dropped off to the north of Iron Cap before contouring back south beneath the eastside cliffs. I do not think we did this quite properly, as we ended up doing some steep veggie belaying, but then we found cairns on easy terrain and carried onwards.

The shadows were growing long as we began the final climb through nice heather trails to the famous Tank Lakes. After so much continuous off trail travel, we found a surge of energy upon reaching the flat meadows of the lakes and cruised across the beautiful plateau.

The Tank Lakes are perhaps the shimmering jewel of the Alpine Lakes High Route. These pools of water sit on high granite benches across the valley from the giants of the area – Summit Chief, Chimney Rock, and Lemah. It was beautiful to reflect on the special trips that have woven their ways around these impressive summits, most recently the Alpine Lakes Crest Traverse in a day and the Snoqualmie Haute Route, which I skied with Adam.

All day, the air had been cool, clear, and calm. Here at the Tank Lakes, the light felt fleeting but soft. Clouds hovered over the high peaks like thought bubbles. We lingered, hanging onto the fading warmth and glassy reflections. This was a day that had unfolded steadily and peacefully without drama, like a script unfolding in time and space. Some days just play out smoothly, like the surface of the lakes we admired. It was turning out to be a pretty special day.

As the shadows grew longer, it was now time to began the long journey back down the Middle Fork. So we followed heather benches southeast towards Williams Lake, enjoying the golden hour on Summit Chief and the giants around us.

Down at Williams Lake, we boogied and started a jog down the gentled Middle Fork Trail. We passed through sparse meadows, following the rushing stream, watching alpenglow kiss the Chieftans above us. Cold air sunk in the valley bottom, urging us along. This is a powerful place, holding many strong memories. I have long heard North Bend locals speak of the “Magic of the Middle Fork”. On this run down the remote valley, I finally understood what they meant.

Eventually, darkness won and we pulled out headlamps. The trail had some ridiculously stupid uphills for no reason near the end. We were all pretty worked when we finally reached our bikes. There were a few flat tires to deal with, but we got moving and biked out the rough road in complete darkness.

Our day on the Big Snow Iron Cap High Route was truly one of the finest days I have had in the alpine. It was simple, pleasant, lengthy, and just so consistently beautiful. It had the calm vibes of fall but the long hours of summer. It was high routing, at its finest, in one of the finest regions of the Alpine Lakes Wilderness. Thank you to Blake, John, and Adam for bringing the stoke for another memorable day in the mountains!