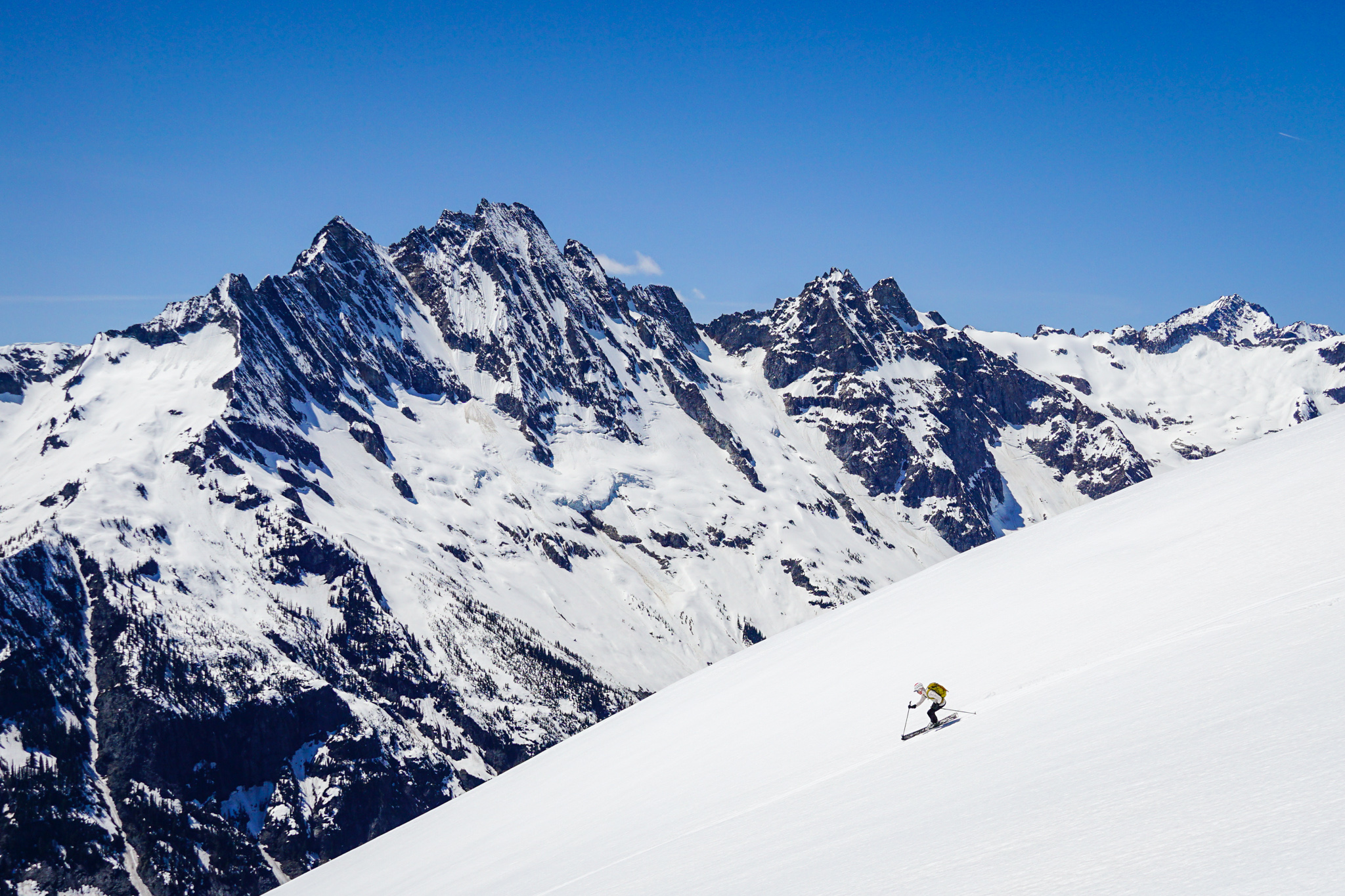 Whenever Logan visits from Montana, we make it a priority to get out and enjoy some skiing or running together. This year, he timed his return perfectly with the opening of Highway 20 and a week of sunshine! We had a great tour over the weekend at Washington Pass and I took a day off mid week to ski Black Peak at Rainy Pass with him. If we were still feeling it at the end of the day, we would add on “The Buttcrack”, a coyly named (by other Kyle) east facing gully that splits Crooked Bum right above the highway.

We got a leisurely 7:30am start from Rainy Pass. The approach is nearly all east facing and is a true cooker in the morning sun. Westside clouds quickly burned off and made for a dazzling morning.

We followed the Black Peak – Last Chance Pass Tour described in the Volken guide. So from Lake Ann, we climbed to Heather Pass and did a descending traverse to Lewis Lake in the clouds. But the sun quickly broke through once again and illuminated a ridge of bending cornices. We witnessed one massive collapse.

The terrain is massive, but the skinning is gentle through larch glades to Wing Lake and then up to the col beneath Black Peak. It was an absolute sauna. We stopped at every needleless-larch for a little shade, unzipped every zipper in our pants, and tried our best to not fry.

Logan climbed Black Peak many years ago, when it was one of his first high peaks. I did the NE Ridge two summers ago with Jacob. This mountain is beautiful during all seasons.

At the col, we switched to booting for the final 800 ft climb. The nasty scree gullies from the summer are still filled with snow, making for a more pleasant ascent and descent. We stopped about 100 ft below the true summit since higher was just rocks. We are skiers, not peakbaggers, after all!

Logan made the joke, “the views aren’t that good; you can only see one mountain range!” Whereas in Montana, you can often see five or six unique ranges at once. Oh well, our one range is just as big as all their ranges combined!

The views from Black are amongst the best bang for your buck anywhere. So many great North Cascadian peaks make an appearance, but the undisputed star of the show is Mt. Goode and its proud NE Buttress. Steve and I climbed it last summer. From afar, it looks so impossibly steep and imposing.

While the gully we booted to the top was a little thin and had rocks sticking out, two gullies to skier’s right looked nicely filled in and a preferable descent route. So we scooted over and peered down at 2700 ft of south facing ripe corn. This was going to be goode.

As we exited the gullies and entered the smooth, lower-angle apron, we began to speed up and start screaming through the fertile fields of corn. As far as the eye could see were glaciers, peaks, ridges, and endless corn. It felt like we were shooting a North Cascadian corno.

Unbeatable position plus primo conditions made for one of the best runs of my life. We swooped and sailed. Spring skiing does not have to be hard, steep, or scary, to be totally epic. Just give me some corn, wide open slopes, sunshine, and one of the most beautiful valleys in the North Cascades.

The perfect corn held until about 500 ft below the valley floor of Woody Creek. At the bottom, we sipped fresh water from open streams and lounged in the shade. Then it was a slow, hot climb to Last Chance Pass. But the valley of Woody Creek was beautiful.

At Last Chance Pass, we met a group of three. One of them asked me if I drove a truck, which is a strange question. It turned out they had mistaken me for the other Kyle, who they had parked next to last weekend at Washington Pass! I guess our similarities extend beyond our names…

The east facing run down the other side was completely cooked and resembled water skiing. We struggled to hold elevation as we contoured beneath the southeast face of Corteo Peak. We passed through massive avalanche carnage, which seems par for the course on south faces in the central to eastern Cascades this winter.

The climb back up to Maple Pass was smoking but at least the climb was mellow and we could keep an easy pace. From Maple Pass, we skied back down to Heather Pass and slapped on skins one last time for a skin up the SW ridge of Crooked Bum.

The ridge skin is pretty easy but felt long and tiring at the end of the day. But the increasingly epic views kept us engaged. The Bum juts out into the valley of the highway and thus feels surprisingly prominent. The vantage is excellent.

Of all parts of our tour, this section had the most uncertainty. The topo map made the descent from the Crooked Bum into the Buttcrack look pretty steep and cliffy. We skied sloughing snow on the ridge and Logan expertly picked our way through some cliffs down to the top of the crack.

Earlier in the day, we had came up with a brilliant idea: ski the buttcrack butt naked! So we quickly stripped and ripped. The crack had reentered the shade and so we skied refreezing avy debris, but who cares? 5000 gnar points each! If I had cell service, I could have called my mom…

We reclothed at the bottom and had a quick ski out to Rainy Pass. We talked to another skier and found out they had seen us descending the Buttcrack! We asked if he had noticed anything, uh, er, unusual about our descent. He said no. So we told him we just did a BN. He was thoroughly unimpressed and added “oh, I did one of those today also”. Naked skiers everywhere in the North Cascades!

I feel that the Black Peak to Last Chance Pass Tour is one of the finest ski tours I have ever done. The required technical skills are pretty low and most of the travel is easy. But the terrain is continuously stunning and the run down the south face of Black is legendary. Tossing in the Buttcrack is a great bonus run and humorous addition to a great day! Who doesn’t want to be able to point up at the crack and say they shredded it?