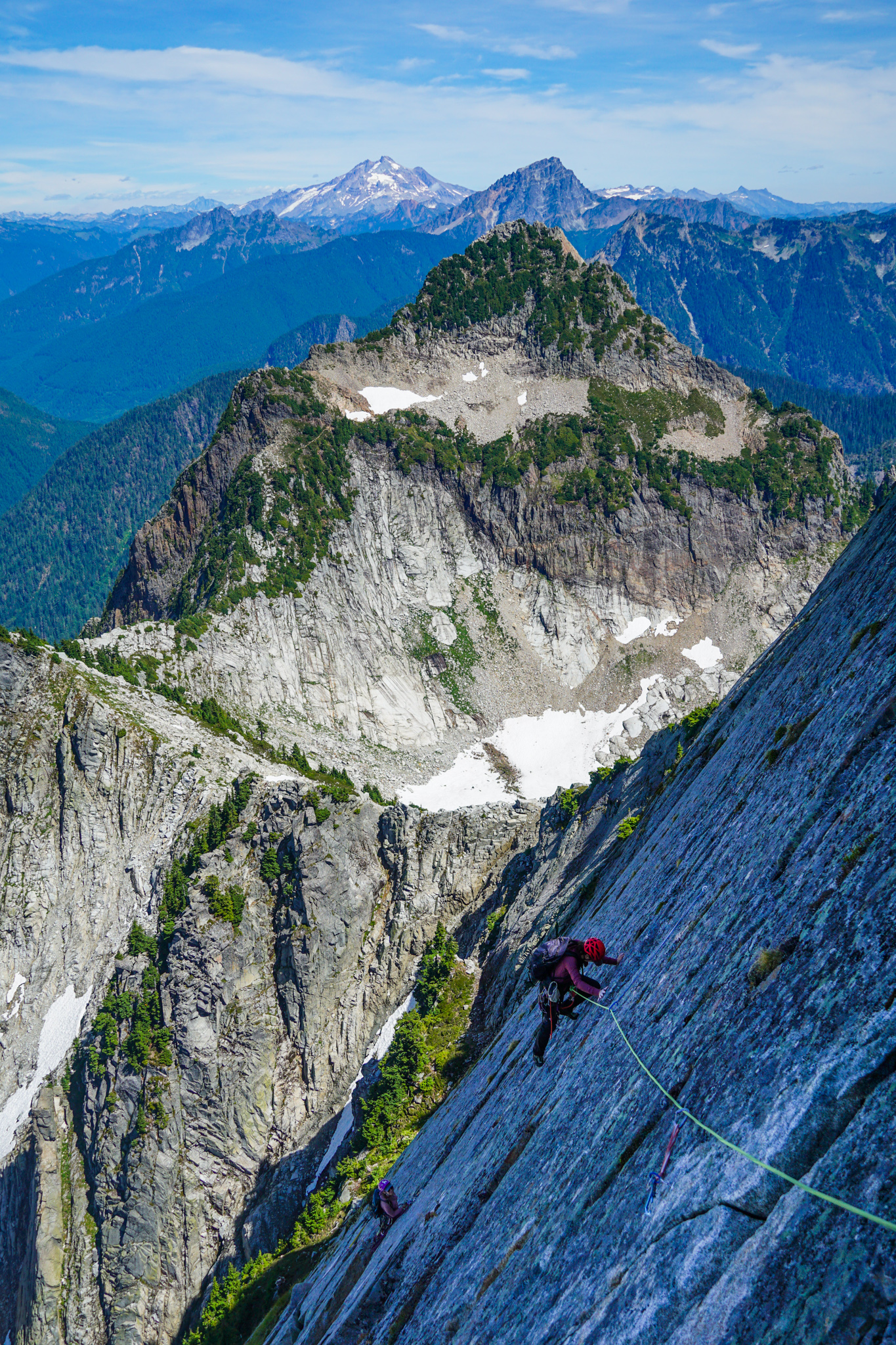 At Ease on Edge

Vesper Peak and the surrounding area has seen a lot of new route development in the last decade. Local legend Darin Berdinka developed a few moderate routes on the north face of Vesper Peak. The most famous is the Ragged Edge, which is quickly becoming a classic. My friend Amy was visiting from the East Coast and looking for an easier alpine climb, so it seemed like the perfect time to check out the “new classic”.

We had some nice thin cloud cover on the approach hike, but it cleared out quickly as we ascended to Headlee Pass. I have skied Vesper a few times recently, but it had been many years since I hiked this trail in summer.

We stopped and filtered water at the lake outlet, but there ended up being running water higher up. During most of the approach, we enjoyed the company of a father daughter combo. It was the daughter’s 17th birthday! I didn’t know how to tie into a rope when I was 17…

We followed the trail up to the base of the slabs and then traversed right to the small notch slightly higher than the main notch between Wolf and Vesper Peak. This is how you access the climbs on the upper north face.

The climbs are accessed by a slightly improbable heather ledge system with a nice goat trail through it. At the base of True Grit, we had to down climb some pretty exposed 4th class to access the alternative start to The Ragged Edge. While it did add one nice additional pitch, some people might not feel comfortable with this down climb and it certainly could be sketchy if wet.

The first pitch featured a nice hand crack and then some easier terrain. I personally found the 5.7 slab on the second pitch to be the crux of the entire route. I had to be pretty thoughtful to get through this section on lead, especially with a bit of rope drag, as our first belay was in a weird spot due to a party in front of us. Thankfully, they let us pass after the second pitch.

In terms of quality and exposure, each pitch truly keeps getting better. The climb follows the edge of the overhang on the side of the upper north face. The 5.7 face traverse on pitch 5 was particularly memorable. The fact that the climb sneaks onto the upper north face from the starting ledge means that it feels much higher off the ground than it actually is. The exposure is big time for such a little route!

Pitch six is the “money pitch” – a long, easy romp up the arete to the summit, the Ragged Edge! I belayed from the true summit and got some great shots looking down.

The Vesper summit is, in my opinion, one of the greatest views from such an accessible peak in the Seattle area. And I would say that the Ragged Edge is one of the highest quality introductory alpine rock climbs in the Cascades. The grade is accessible but remarkably sustained, the climbing is varied and fun, and the position is fantastic. It definitely deserves the attention it gets!

Amy opened the summit register, and on the first page she flipped to, she found her entry from 2019!

We soaked our legs in the outflow of Vesper Lake and then had a casual hike back to the car, reaching the car about 11 hours after we started. It was nice to tick off this classic, and especially to do it with someone who brings so much stoke to the mountains. From the views to each pitch, Amy was overflowing with excitement and amazement. I guess there is nothing like leaving home to make you realize how much you miss this beautiful place. People like her remind me to be grateful every day.