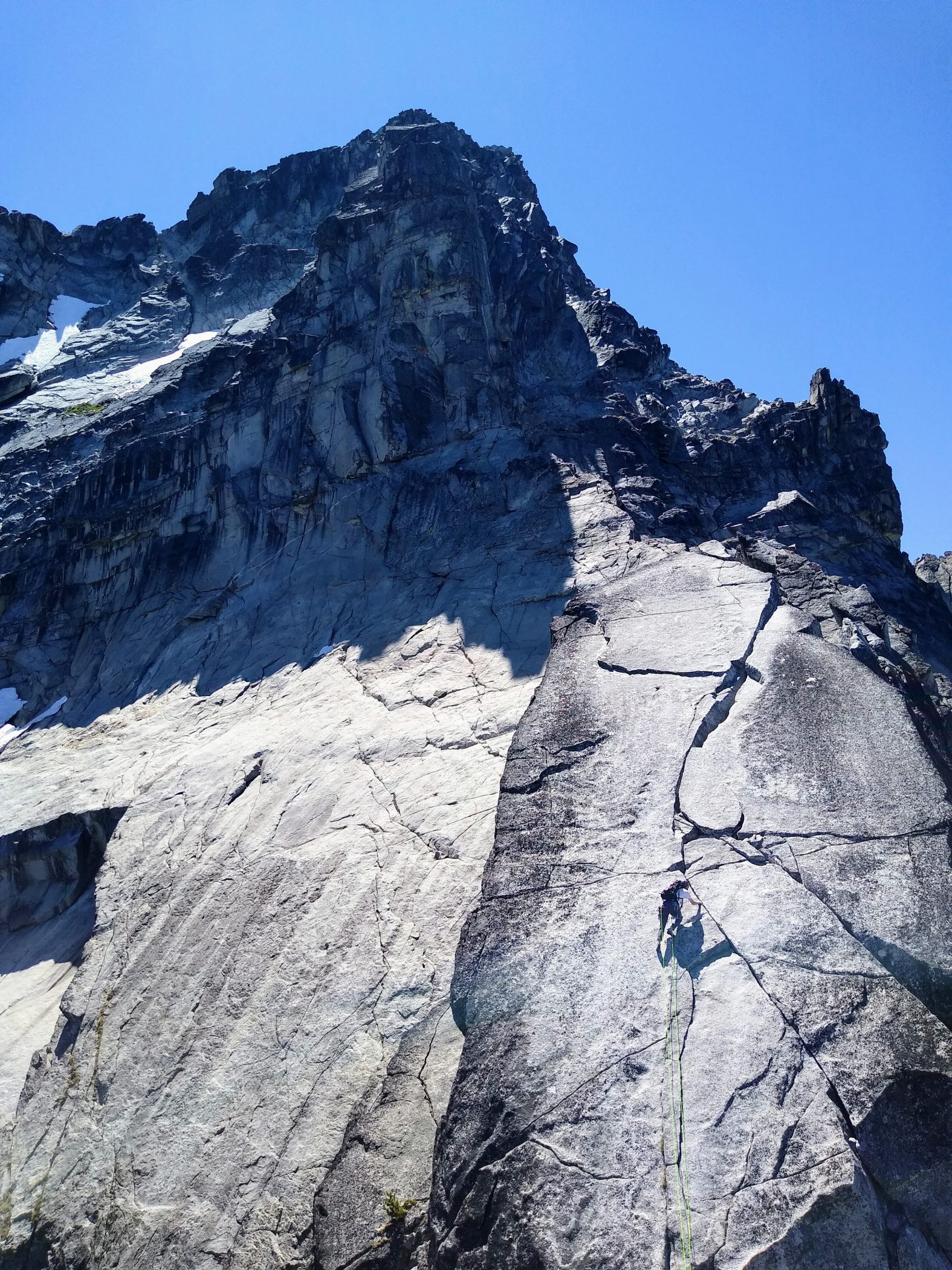 The North Ridge of Mt. Stuart is a famous alpine rock route, not just in Washington, but nationally. The buttress juts out of the wild north side of Stuart, rising 2800 ft. from base to summit, with hanging glaciers on either side. I have spent so many days gazing at the North Ridge, from many different vantages. The climb is long and moderate (5.9), but notorious for being the source of many epics. I had done the Ice Cliff and West Ridge twice, but never felt quite confident enough for the North Ridge. With Jacob in town for the month of July, we finally felt ready to tackle this monster of a climb. It had been a dream for us for so long, ever since we started trad climbing together.

We left the Esmerelda Trailhead at 3 am and started hiking towards Lake Ingalls. It got light as we scrambled around the left side of the lake. From Stuart Pass, we followed the trail down to 6000 ft and then cut eastward into the beautiful boulder basin beneath the West Wall, site of the mythical Gorillas in the Mist. We did not see any gorillas, but it was not a misty morning. Perhaps the humidity was too low.

We kept a relaxed pace up to Goat Pass, swatting mosquitoes that persistently followed us. We hit the sunshine at the pass and took a snack break in the warmth.

There were a few short snowfields to cross beneath the Stuart Glacier. None were steeper than 25 degrees or so, but the snow was still pretty firm in the morning. We had brought light microspikes instead of crampons to save weight. I easily plunge stepped down the snow in my Ultra Raptors, but Jacob struggled in his Topo Athletic trail runners, even with Kahtoolas Microspikes on. We lost a fair bit of time here. Some of the snow was avoidable on loose moraine, but some crossings were mandatory, at least at this point in the year.

Most climbers complain about the long, circuitous approach to the base of the North Ridge from the Ingalls side. True, it is pretty long, but it is also incredibly beautiful. This is the kind of stuff I do on my high routes and backpacking trips for fun. Aside from the mosquitoes, I was enjoying the morning stroll. The giant granite walls and little pocket glaciers with waterfalls pouring out transported me back to the Palisades of the High Sierra. It was wonderful.

We filled up two liters of water each at one of the streams and then continued down to the base of the North Ridge. Here we met two Leavenworth climbing rangers, who were heading out. One of them had climbed the entire North Ridge in trail runners! They must be hard core crushers…

We were both stoked and racked up quickly. We started scrambling towards the distinctive “J Pine” of the first pitch, but ran into a short step of 5.7 thin fingers on the “scramble” so we broke out the rope and did a quick pitch 0. I think there may be a 4th class way around to the left.

Jacob led the first pitch, which ended with a 5.8 squeeze chimney. He was struggling with the pack on, so he clipped it to a piece and then pulled the move. Unfortunately, he had tied in on both ends of our twin rope, so we were not able to haul his pack. Thus, I ended up following the chimney with my pack on my back and his pack suspended between my legs! Apparently I figured out the beta (left shoulder in, standard chimney technique) because it was actually pretty easy, despite the weight.

I led Pitch 2, which was short and easy. Jacob wanted to take Pitch 3, with is the overall 5.9+ crux of the route. He got a little cruxed out at the insecure layback and pumped himself out, taking a short fall on the fixed nut. So then he just aided that short section before climbing the rest. Once again, I followed with his pack hung beneath me. The layback was indeed insecure, but with the comfort of a top rope, I was able to fire through it pretty quickly.

From here, the route features thousands of feet of 3rd to mid 5th class climbing close to the ridge crest. I grabbed the rack and set off, doing what I do best as a rock climber: routefind decisively and move quickly over easy terrain.

We had brought a double rack and dozen slings, so I was able to lead these giant, hour long simul blocks. After reaching the notch where the Abbreviated North Ridge joins, the ridge got distinctly sharper and more exposed. We were shouting in ecstasy with little 5.5 laybacks on a knife edge crest or hand rails over the abyss. The position was fantastic, and it just kept getting better the higher we got.

Two long simul bocks got us to our first clear view of the Great Gendarme, the crux of the upper North Ridge. It has a reputation for hard off width climbing. I find that hyped up difficulties, like the NW Couloir of Shuksan, can have a way of getting into my head. But I told myself that I have been climbing solidly at Index this summer at the 5.9 grade, so I should be fine.

Jacob lead a short simul block up the fantastic 5.5 slab with a crack and over to the base of the Great Gendarme. The slab was one of the highlight pitches to me – easy, fun, and so aesthetic.

We reached the base of the Great Gendarme a little before 3 pm. We had been climbing in the sun for nearly 7 hours at this point and it was nice to feel a breeze and lie in the shade. The rock was cold to the touch, perfect for sending temps. We were both starting to fatigue, but this is what we came for.

I took the first pitch of the Great Gendarme, which featured a series of 5.8 laybacks, underclings, and corners, each one harder than the last. It was a beautiful pitch, so clean and splitter. The final layback was strenuous, smearing my feet on the wall to the left, burning through the tiny reserves of strength in my forearms. I could feel the pump clock ticking. But I found the hand jams, plugged in gear, and rocketed through it. For a weaker climber like me, it was either send with speed or be sent back down.

Jacob took a break before racking up for the off width second pitch of the Gendarme. We swapped ends of the rope so we could haul his pack, not repeating the mistakes of earlier. Jacob made the traverse rightward and then launched into the wide crack. As he clipped the stuck #4 cam, I reminded him that there was no shame in pulling on gear if needed, to which he responded “Screw that, I’m gonna send it!”

Atop the sunny pedestal halfway up the Great Gendarme, I watched Jacob, who learned to climb with me five years ago, pull the crux moves and finish the pitch with confidence. Here we were, all alone, on this beautiful hunk of stone, thousands of feet off the deck. While I love the simplicity and speed of non technical travel in the mountains, technical climbing creates such a visceral experience with mountains – you feel each fingerlock, the way the rock sweats, the way each fiber in your body strains for upward progress. As climbers, we seek not the easiest way through, but the hardest, most challenging. We dance upon the edge of control; we reach for the suspension of gravity. What we can accomplish when we truly commit ourselves is both humbling and amazing.

As I entered the wide crack, all my off width fears disappeared with each bomber fist jam – there were no OW moves required! I actually found this pitch to be easier and more secure than the previous pitch, but then again, I was top roping.

All day we had been alone and the summit of Stuart was similarly deserted. We luckily found running water coming from the small snow patch between the true summit and false summit. Then we continued on our long descent of the Cascadian Couloir, aka the Poop Chute. We were motivated by the 11 pm closing of Taco Bell in Cle Elum, and my morning meetings for work the next day.

We climbed back up to Long’s Pass, swatting mosquitoes once again, as alpenglow kissed the south side of big Stewie. He is such a magnificent mountain: complex, massive, and beautiful.

We cruised down the trail and reached the trailhead just barely without needing a headlamp at 9:30 pm, a full 18.5 hours after we started. With empty stomachs, bags full of vert, and hearts full of happiness, we drove into the receding darkness.

The North Ridge of Stuart was a challenging but incredible day for Jacob and me. Honestly, I did not fully comprehend the size of this route going in. But our collective climbing experience served us well, allowing us to move reasonably efficiently over the course of a long day. The actual rock climbing was consistently phenomenal, with many individual sections that would be classic if they were taken out of the alpine and transplanted to a crag. It provided just enough technical challenge to force us to dig deep, which is always a memorable experience in the alpine. It brought together nearly everything about rock climbing that I love – exposure, position, route finding, crack climbing, the list goes on.

The high is still wearing off, but I believe the Complete North Ridge is completely deserving of its classic status and immediately ranks amongst the best alpine rock routes I have done, including the South Face of Charlotte Dome and the Northeast Face of Pingora. It is certainly the longest. It is the proudest line, and a line I am very proud to have climbed.

To outsiders it may seem like it's been business as usual for me, but I've actually struggled a lot this season to balance responsibilities, chase the weird weather windows, and keep a positive attitude. It's been a busy period in my life, with a death in the family, career stuff, trying to be a good partner. There's a lot more to life than skiing and those things have demanded most of my attention and emotional energy.
Hello, this is Kyle and Kelly, and we'll be your aerobics instructors today.
🔥 in the sky.
At the feet of giants.
My best Ansel Adams impression, although I couldn't get myself to greyscale out that beautiful lavender in the sky and water. We got here after skinning and hiking hard in the dark for nearly four hours. Moments like this last seconds, and I feel lucky to have been there at the right time.
Finished a little write up about my trip to the Sierra! It was a challenging trip that had its ups and downs but turned out to be very rewarding and cool. The Sierra is a special place to me so it was sweet to return and get to experience it in a new way.