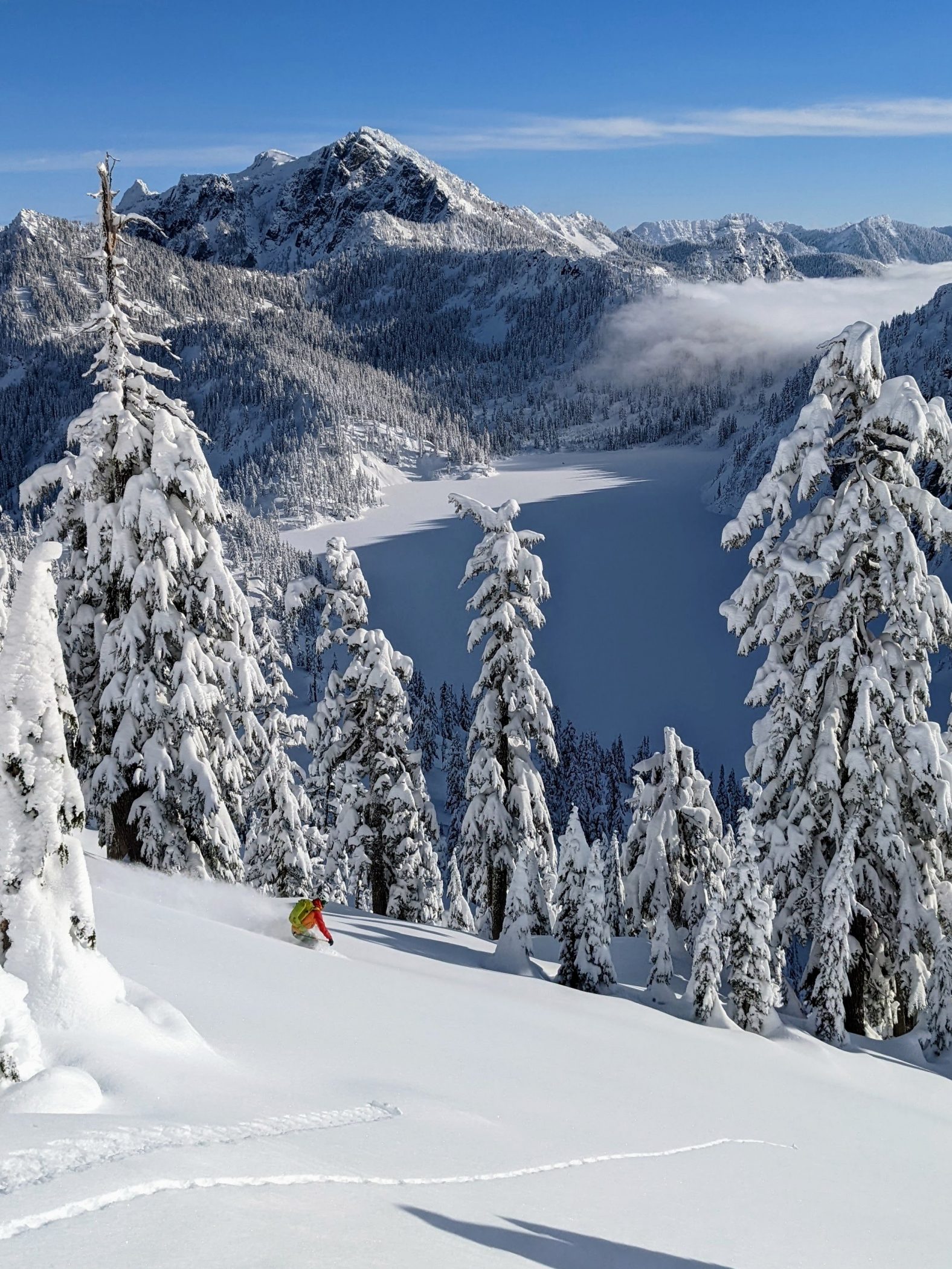 A December to Remember

After staying local last year, I have been prioritizing trips to other states and countries this year, like my Hyalite Trip a few weeks ago. During the Christmas to New Years break, we planned a ski trip to Golden, BC. However, the forecast was for highs of -20F at Rogers Pass, so we pivoted and decided to stay local. For a week here in Western Washington, we were treated to lowland snow and temperatures in the teens at night. In the mountains, we got frigid temps, blower powder, low winds, and great stability. During one day of the marvelous cycle, Sam, Porter, Dan and I went out to farm some of the delicious powder in the Snoqualmie backcountry.

Easterly flow fog made for a gloomy start to the day, but like always, we knew we would break out of the fog.

Above the fog layer, it was a brilliant morning! It is so rare to get a bluebird day in the mountains here with good snow and good stability on all aspects. What a treat!

At the shoulder of Chair, we transitioned in the cold wind and descended through fluffy powder towards the Cache Couloir. I have skied the traditional North Slopes of Chair many times, but this was my first time skiing the Cache.

The Cache was pretty tracked out itself, but the run was still cool. As we reached Snow Lake and began to transition, Sam noticed his toe piece had ripped out of his ski! It was a bummer, but at least it was not the most remote spot for this to happen, like deep on the Snoqualmie Haute Route. We handed him a car key and he headed out while we continued on our tour.

With all the cool, clear nights, Snow Lake was an icebox, trapping the cold air. I did not have a thermometer, but it felt at least 20 degrees colder than the surrounding areas and was likely well below zero. My jaw started hurting while skinning across the lake and Sam later said he experienced the same thing. Sam said it was as cold as Denali. Yikes!

On our way up to Holy Diver Couloir, we caught up to Kyle (KJ) and Sylvia, who I did the Easy to Cascade Pass Traverse with last spring. The skin track we followed was set by our friend Steve the previous day. It is a small world!

I had skied Holy Diver once before in late winter conditions. The snow was good then, but even better this time! We got third tracks after Steve and his partner the day before.

At the exit notch after skinning back from Holy Diver, we descended the south facing slopes towards Snow Lake. I have skied this multiple times, always in some version of mank or breakable crust. But today, we were treated to cold smoke! It is such a rare treat to get to ski powder in the sun here. How could this be Snoqualmie? More like the Snoquasatch!

Since it was barely after noon, we decided to continue with the regular Chair Peak Circumanvigation. We skinned up and then took a fun little lap down to Chair Peak Lake. During the tour, I was testing out a pair of fat 120mm swallow-tailed Wovn Kingfishers, which our friend Peter makes. They surfed through the powder in a way I had never felt before, making giant arcing turns! They were so playful and fun.

Next, we skinned up to Melakwa Pass and took a lap down Cupcake Couloir, which I skied first last year around the same time. It is a great little run, usually holding good snow protected from the wind.

Once we got back to Melakwa Pass, we enjoyed the last bit of sun before it dipped behind Kaleetan. The run down to Melakwa Lake was surprisingly sharky, but we managed without any significant bites.

As we skinned up towards Bryant Col, our final climb of the day, colors started to fill the western sky and reflect off the perfect, sparkling powder beneath our feet. The snow was so absurdly good here, even days after fresh snowfall. I have never seen such an incredible window of perfect snow, weather, and stability here. And it happened to perfectly align with our time off from work. Call it what you want: a Christmas miracle, a December to Remember, a gift that reminds us to be grateful. It will soon be gone, but that is part of what makes it so sweet.

At Bryant Col, we gazed across to the Alpine Lakes Crest and watched the golden light bathe the snowy peaks all around, while the fog awaited us below. Magical moments, so close to home, are special.

Bryant Couloir looked foggy and tracked out, so we opted to descend towards Great Scott Basin and then through No Fog, which was ironically extremely foggy and difficult to see. We got back to the car just before dark.

After years of exploring the Snoqualmie Backcountry, it was so great to string together multiple tours into the “Super Chair Circumnavigation” on a day with such perfect snow and weather. This was one of those days that just came naturally and easily, making the most of this gift the weather Gods have granted us during these holidays. It was my first big tour of the season at Snoqualmie, and possibly the best snow I have ever skied here. It feels good to be back, making turns and roaming the hills. Here’s to another great ski season!