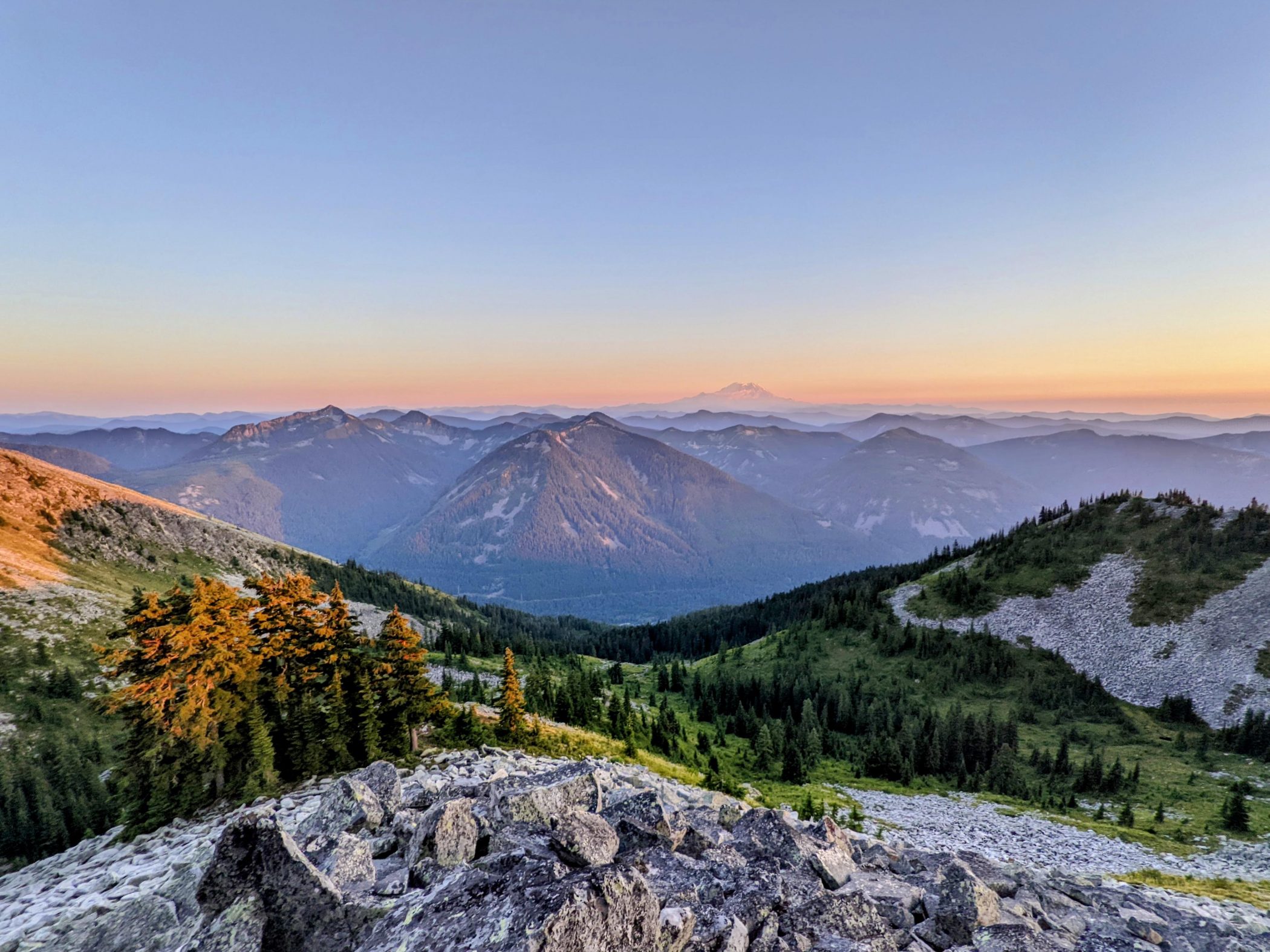 While I was in Europe, some friends put in super inspiring efforts back home (shoutout to Kaytlyn and Jenny for their humongous North Cascades Traverse and Daniel for his Rainier Infinity Loop attempt). They were getting rad and I was being a tourist, taking lifts around in the Alps and sipping margaritas on the beach in Mexico. One day, Rio called me out. He said I was becoming soft. I was scared he was right, but determined to prove him wrong. The problem was that my first four weekends post-Europe were completely booked with family, work, and travel. It would not be until the end of August before I had a free day. It felt like my summer was slipping away.

For our last hike in Europe, Kelly and I did the Hardergrat, the famous knife edge grassy ridge in Switzerland. The views, exposure, and proximity to town make it a classic. I began to wonder what the local equivalent would be. I had seen my friend Kyle (one of the other Kyles) do the Mailbox to Granite traverse above I90 a few weeks before and knew that was it. I had put off this traverse for many years because it felt lame in comparison to the mighty peaks up north, but now I wanted to do it purely for the Euro comparison. I even had a name for it (thanks to Silvia for the German translation): Nordkurvengrat (literally “North Bend Ridge”).

Over the years, I have had a project that I would basically call “Is every objective near Snoqualmie Pass just a dawn / dusk patrol?” It is in a similar vein to Dr. Dirtbag asking “Is every objective in the lower 48 just a day trip?” which lead to his famous Northern Pickets traverse in 28 hours (does that count as a day trip if it took over 24 hours?). I have done the NE Buttress of Chair Peak before lunch, slammed the Slot before and after work, and had too many party laps on Silver to remember. Could the Nordkurvengrat be done in a long summer evening? It felt like the sort of challenge to add some spice to the adventure. So I was all set to go the week after getting back from Mexico. Then I got COVID for the second time, although the symptoms were mild. I decided enough was enough; I had to go for it. Bailing would be Euro-soft, and I did not want to be Euro-soft, now did I?

I got up earlier than normal and put in a solid work day at home before driving out to Mailbox. I started around 1 PM. It was warm so I tried to just keep the pace easy and topped out in 1hr 30min.

The travel is pretty simple to Dirtybox, but that is where the fun begins. I had heard horror stories about the section from Dirtybox to Dirty Harry’s. I wasted no time and dove into the jungle.

I moved pretty quickly, backtracking a handful of times. Generally I just followed my nose, tried to stay close to the ridge crest when in doubt, and it worked out fine. There was some actually quality rock, a fair amount of bushwhacking, and some unique knife edge jungling – like knife edge rock, with vines and bushes around you.

After an open section, the ridge drops a lot and I was forced to drop down to the right through loose sand. Getting back to the ridge proved to be on the cruxes and I fell many times on dried out pine needles. At one point, I had an uncontrolled slide on pine needles in the forest, grabbing for branches to stop my slide. This section would be substantially easier if it was wetter and not all dried out, or if you had crampon front points. Alas, I thought it was pretty fun and hilarious.

I continued thrashing and found the obvious leftward traverse right before Dirty Harry’s that led to the final fixed line. It was a funny amalgamation of webbing and accessory cord, much more jank than a pristine Euro via ferrata, but for the PNW, it was pretty damn Euro! Without the fixed line, I would have graded it class 5 pine needles, so I was grateful for it.

I checked my watch and saw I had completed Mailbox to Dirty Harry’s in just over an hour, much faster than I expected. I would later find out that I had on-sighted the Strava segment crown, my first ever Strava segment crown, and a fitting one! Suddenly, I had visions of reaching Granite before dark.

My legs were cramping weirdly going down Dirty Harry’s, probably a function of very little training the last few weeks due to life circumstances and the all-out sprinting I had done at Rupalympics (my company olympics) a week before where it felt like I pulled something. I broke into my supply of electrolyte pills earlier than expected and drank from a blessed stream right before the junction that would lead me up to Webb.

Although Dirtybox to Dirty Harry’s was supposed to be the crux of the route, the climb up Web definitely was the mental crux for me. The “trail” here follows an old road grade that is completely overgrown in thorny bushes. My legs were stinging. Fortunately, the trail breaks off the road bed after a quarter of a mile and faintly moves through a forest instead.

I soon arrived at the little pond on the west side of Web. It still had some marshy water, but I was glad I had filled up at the surprise spring.

The boulder field up the west side of Web was long, hot, and surprisingly unstable. It felt like maybe 20% of the rocks I stepped on moved and I was worried about hurting myself. In my head, I remembered the West Granite boulders to be very stable, but I hoped my memory was not duping me.

I took a five minute break atop Web to shake things off. At least now I was in familiar terrain, having done the P3 to Defiance loop before. This section is primo and beautiful, easily the best section of ridge line on the I90 corridor.

The mosquitoes were thick even on the summit of Defiance, so I started the descent pretty quickly. Technically, the true Nordkurvengrat would continue with West Bandera, Bandera, and Pratt, but that would definitely be beyond a dusk patrol, at least for me. So instead I opted for the trail express path past Rainbow Lake towards Pratt Pass. I had never been on this section before and found it to be surprisingly beautiful. The light was becoming soft and golden, and the beargrass was still blooming in the shadier heather meadows. My legs were still moving well, so maybe my body would hold up after all.

I grabbed some water at Rainbow but remembered some springs near Pratt Pass from a run a few weeks back. I figured those would be less buggy, but this turned out to be a mistake. If there was a source there, it had all dried up and it seemed like I might have to finish the Granite traverse with no water. At the last minute, I found a tiny trickle coming out of the boulder field, although I was immediately swarmed by 30 mosquitoes and paid the price as I filtered water and tried to swat them.

I was once again in familiar terrain, having done the Granite Mountain Traverse once before. Fortunately, my memory had not failed me and the boulder field up West Granite was about as good as it gets. It was cooling off and I knew I would make it to Granite before dark.

Where my memory had sandbagged me was the traverse from West Granite to Granite. I had forgotten how long this section was, dipping back into the trees before climbing a long boulder field. But the finish was in sight, so I powered on. I always get a boost of energy from the fading light in both a competitive sense, trying to race the sunset, and a cooperative sense, immersed in the beauty of the moment. My legs were cramping badly now, but my heart was full as I gazed out across this beautiful backyard.

The sun officially set somewhere on the final climb up Granite. I limped to the summit, ecstatic. I had done it: Mailbox to Granite in a little over 6 hours. With some effort, I could do car-to-car in under 9 hours.

I took about 10 minutes to just feel the breeze, finish the last of my water, and soak it all in before starting down. This was my third time down Granite in the dark, and I was once again reminded how slow and rocky that thing is in the dark. But the rising of the blood red supermoon added an aura to an already special evening.

I stumbled down the trail before pushing a little in the last mile to come just under 9 hours – 8:59. I do not usually care about my time, but I am pretty proud of this one. Considering the circumstances – being sick, tired from travel, and starting in the heat of the day – I did not expect to finish this burly route much faster than 10 hours. Kelly kindly picked me up and we were on our way home.

Other than the fixed line and topographic similarity as a ridge traverse, the Hardergrat and Nordkurvengrat are really nothing alike. They are each spitting images of their surroundings. The Hardergrat is primo, clean, and classic like most things in the Swiss Alps. The Nordkurvengrat is brushy, buggy, burly, and blue collar in that very distinct Snoqualmie way. At times, it was simultaneously Snoqualminix and Snoquompton. It embodied the spirit of the region. I loved every bit of it, although I am not itching to do it again soon. It felt like the proper way to come home, to remind myself that I am indeed not Euro-soft.

I love these after work rambles because they remind me that I do not have to go far to have a great adventure. From the summit of Mailbox to the Granite trailhead, I did not see a single other soul. Even in the most accessible of places, we can find solitude. And in the oldest of spots, we can find challenge and adventure. I feel inspired to head back to the big mountains up north, when I get the time finally. But mostly, I feel grateful for the opportunity to travel the world, yet still call this incredible playground my home.

In the same vein as the Hardergrat, I know give you…

10 Reasons You MUST DO the Nordkurvengrat